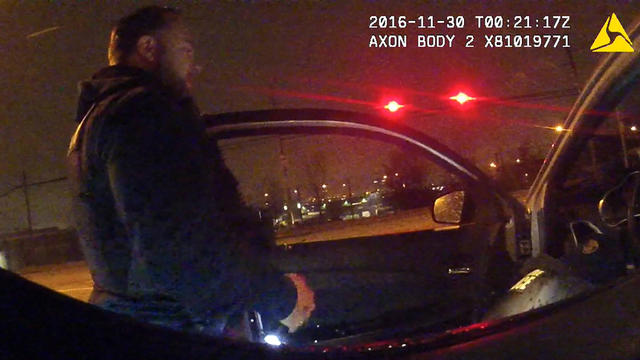 Privately, top commanders believe there are legitimate concerns about police misconduct given what is seen and heard on camera during the November traffic stop, Pegues reports. Officers searched the car after witnessing what they said looked like a drug deal.

The video shows the officers searching a car for drugs. As one of the suspects is arrested, he accuses the officers of having harassed him for days.

According to the public defender's office, the officers found nothing in the car until turning their body cameras off. When the cameras come back on, an officer is seen squatting by the driver's side of the suspect's car, apparently unaware that he's being recorded.

He then stands up and steps back. About 30 seconds pass, and another officer approaches the car, then squats down and pulls out a bag of drugs.

The case against a woman who was facing drug charges after the incident has been dismissed.

The police said in a statement that "anytime an allegation of misconduct is made" against an officer they take it "seriously and investigate it fully."

The incident was the second time in recent weeks that Baltimore officers have been accused of planting evidence. Body camera footage released in July involving different officers allegedly shows drugs being planted in a backyard.

In that incident, which happened in January, sources said it appears what is alleged to be an officer planting evidence may be more of a training issue connected to the use of the cameras, Pegues reports.

Police spokesman T.J. Smith said at a press conference Wednesday that one officer in that incident has been suspended as the investigation continues. Two other officers have been placed in positions where they wouldn't be in contact with the public.

Smith said officers involved in the November incident haven't been suspended at this point. Smith didn't identify any of the officers because they aren't facing criminal charges.

At the press conference, Baltimore Police Department Commissioner Kevin Davis discouraged the public from jumping to conclusions based on gaps in videos. On Tuesday night, Davis sent a memo to officers reminding them that they are required to activate their body cameras when responding to calls and searching for evidence and they are required to keep those cameras on.

There is also an acknowledgement that these incidents perhaps should have been caught sooner by the Body Worn Camera Unit, which screens incoming video. Each day, the unit looks at the last 24 hours of body camera footage from officers.

There is a growing consensus that the unit is undermanned considering the amount of video they have to watch. About 90 percent of the department uses body cameras.