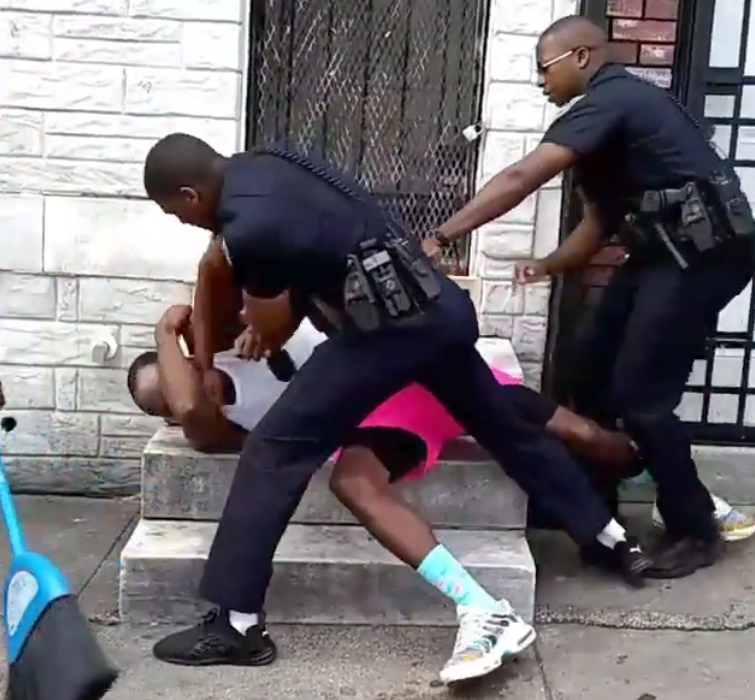 BALTIMORE -- A Baltimore police officer has resigned after a video surfaced online showing him repeatedly punching a man and knocking him down over steps on a sidewalk Saturday. The recording lasts about 30 seconds. The city's interim police commissioner said the video "deeply disturbed" him.

The video begins with the officer standing in front of a black man who has his back to a wall. The officer, who is also black, can be seen shoving the man in the chest before the officer starts throwing punches. The man tries to block punches from the officer but doesn't appear to fight back. The man is pushed over some steps by the officer who continues to throw punches, and the video ends with the officer on top of him.

"I'm deeply disturbed by the video that surfaced online," interim Police Commissioner Garry Tuggle said in a statement Saturday. "The officer involved has been suspended while we investigate the totality of this incident. Part of our investigation will be reviewing body worn camera footage."

"The officer involved in yesterday's incident is no longer with the Baltimore Police Department. Interim Commissioner Tuggle has accepted his resignation," the statement said, adding that a second officer seen in the video "remains on administrative duties. This remains an active criminal investigation."

Tuggle is asking any witnesses to contact the department's Office of Professional Responsibility at 410-396-2300.

Warren Brown, an attorney for the man who was knocked down, identified his client as Dashawn McGrier. Brown said his client faces charges for allegedly assaulting the officer in June, charges McGrier is contesting in court. Brown said the officer saw McGrier on Saturday and tried to provoke him as a result of their June encounter.

"He is charged with assaulting that officer then, and so here this officer now is like, you know, going after him," Brown said.

Brown said a court date is set for Aug. 22 on the assault charges, and he said video of that encounter between the two men also exists, though he has not seen it. Brown said he has scheduled a Monday news conference to discuss plans for filing a complaint against the officer.

"It is just an act of police brutality that was unwarranted, and it just does nothing for police-community relations," Brown said. "It does nothing to lower crime. My client was not involved in any criminal activity. It's just gratuitous violence that's unnecessary and does no good for the city."

Brown said his client was being treated in a Baltimore hospital. Brown said McGrier "may have suffered a broken jaw, a broken nose, maybe some fractured ribs, and he had difficulty with feeling his left leg, although before I left he did say that he was beginning to get the feel back in his foot, left foot."

In a news release Saturday, Smith said the man was not criminally charged and had been released from custody.

Smith said the Office of Professional Responsibility "immediately" began investigating after learning of the video. The officer, who has been with the agency for more than a year, was then immediately suspended, Smith said.

McGrier's sister, Shantel Allen, told  CBS Baltimore, "I was angry. I was crying. I was hurt. The level of force that was used ... was unnecessary."

Former NAACP head Ben Jealous, a Democrat who is running for governor, said the video "shows just how far community-police relations have fallen in Baltimore, as well as the work that must be done in partnership with city officials to restore trust."

"Building trust begins first and foremost by responding swiftly and transparently, which is why I am heartened that the officer has been suspended pending internal review," Jealous said in a statement. "Long term, we need to be investing in our communities and recruiting police officers who have the temperament, tools, and training to keep us safe without resorting to unnecessary violence."

Baltimore entered a federal consent decree last year after federal investigators detailed longstanding patterns of unconstitutional policing, racial profiling and excessive force. A consent decree, filed in federal court and overseen by a monitor, is generally a road map for changes in fundamental police department practices. In Baltimore's case, the agreement mandates changes in the most fundamental aspects of daily police work, including use of force, searches and arrests.