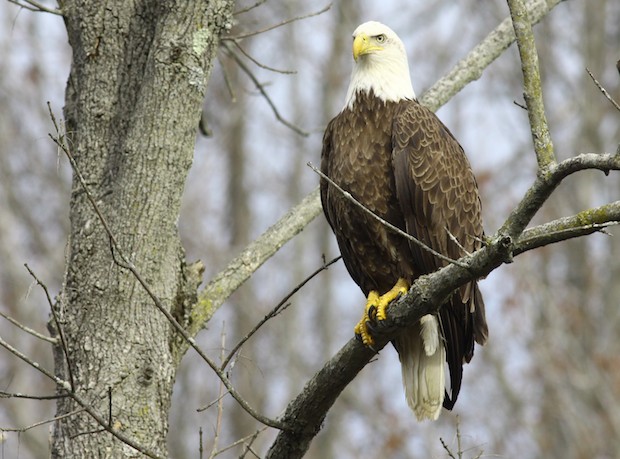 Bald eagles are back in the Big Apple.

A pair of the once-endangered birds have been spotted in a nest on the south shore of Staten Island, the first time in a century that eagles have built a home in New York City.

After an unusual winter, according to the New York City Audubon, in which the iconic birds were spotted in all five boroughs of New York, there were reports in February of a pair nesting on the north shore of Staten Island.

That turned out to be premature, the environmental group said, but the latest report - from the other side of the island - has been confirmed. The exact site is undisclosed to protect the birds from disturbance.

Local birders are calling the male bird "Vito," and say the female appears to be incubating eggs.

The arrival of the eagles is one of America's great conservation stories.

When America adopted the bald eagle as the national symbol in 1782, the country may have had as many as 100,000 nesting eagles. The first major decline of the species probably began in the mid to late 1800s, coinciding with the decline of waterfowl, shorebirds, and other prey.

It got markedly worse after World War II, with the introduction of the pesticide DDT and to a lesser degree from lead poisoning.

By 1963, with only 487 nesting pairs of bald eagles remaining, the species was in danger of extinction, according to the U.S. Fish and Wildlife Service.

DDT was banned in the early 1970s and the bald eagle started on its road to recovery. There are now 69,000 across the United States and they have been showing up increasingly in big cities - with nesting pairs also spotted in Philadelphia, Miami and Washington, D.C., Audubon said.

A similar story has been seen across the state of New York.

During the 1800s and early 1900s, New York was home to more than 70 nesting pairs of bald eagles, and was the chosen wintering grounds of several hundred. By 1960, only one pair of eagles was known to nest in all of New York.

In the 1970s, the state launched a program to bring the eagle back. Between 1976 and 1988, biologists collected 198 nestling bald eagles, most of them from Alaska. They transported the eaglets to suitable habitats in New York, provided food while the birds became accustomed to their new environment, and released them when they were able to fly.