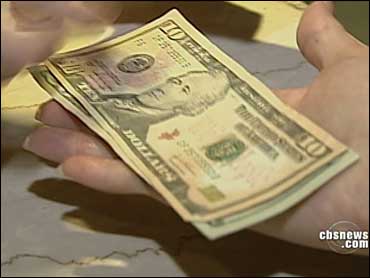 With the economy in a downturn, there's one thing that's going up: bank fees and interest rates charged to customers. Including those charged by bailout banks that have gotten billions from taxpayers, reports CBS News investigative correspondent Sharyl Attkisson.

Take Bank of America and JP Morgan Chase. They got a combined $70 billion in bailout funds. Yet since then, they've doubled credit card interest rates on some customers.

"This means that suddenly their minimum payment is far higher than it was and it may destabilize that family overnight," said Travis Plunkett, with the Consumer Federation of America.

That's not all. At JP Morgan Chase, customers with "no annual fee" cards suddenly found themselves charged a $120 annual fee. Citigroup is advertising loans with annual interest rates of up to 30 percent.

"People are particularly outraged because now these companies are receiving a lot of taxpayer money," Plunkett said.

That kind of outrage led to Tony Bonetti, of California, to start a petition to abolish ATM fees at bailout banks. If that seems extreme, consider that last October, the same month Wells Fargo got $25 billion in bailout funds, it boosted ATM fees for non-customers by 20 percent.

Bailout banks are even charging fees for the jobless to get their benefits. In New Mexico, engineer Arthur Santa Maria had to pay Bank of America a fee to use his government-issued unemployment debit card - and the bank charged him 50 cents more when he called to ask his balance.

Bailout banks and their industry representatives say their fees and interest rates are "competitive," "reasonable," "responsible" and "satisfy consumer needs."

In reality, consumer advocates say there's not much you can do but wait until next year, when new federal rules take effect to fight some unreasonable frees and high interest rates.