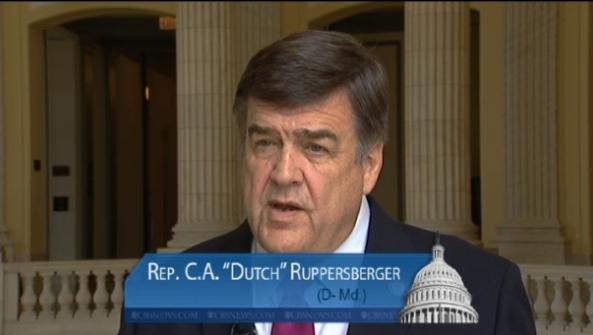 After a fraught debate over whether or not the White House made the right decision in choosing not to publicly release post-mortem photosof Osama bin Laden, a number of lawmakers today were able to take a look at the photos in a private viewing room in CIA headquarters.

The consensus following the viewings? As Republican Rep. Michele Bachmann put it, "we got our man."

"This morning at the CIA headquarters I saw the photos of a dead Osama bin Laden. I am convinced that this was bin Laden," Bachmann said in a statement. "We got our man."

Rep. C. A. "Dutch" Ruppersberger (D - MD) told CBS News there were roughly six photos, including shots of bin Laden's head and body. He said the CIA showed both the post-mortem photographs and pictures of bin Laden when he was alive so lawmakers could compare birthmarks and other defining characteristics.

"There was a photo of bin Laden alive and then a photo dead," he said. "And then if you look at the photos more closely, there are arrows that point to certain facial features: his nose, his ears, certain birthmarks. And that's what we were really looking at, to make sure that this is the person."

Ruppersberger said bin Laden was wearing a white shirt and tan robe when he was killed, and was was wrapped in a white cloth before being put out to sea. He said he did not see video or bin Laden's journal, and was not shown photographs of the compound.

"When I first looked at the photos, my first impression was, this is clearly without any doubt, this is Osama bin Laden," he added. "We've seen this man's pictures for many, many years. This is the person that coordinated the attacks on the United States and killed Americans. So we knew who he was."

Rep. Ben Chandler (D-KY) said he took a look and found the images "quite gruesome," adding that he has no doubt the body and head belonged to bin Laden.

Sen. Joe Lieberman, chairman of the Homeland Security Committee and a member of the Armed Services Committee, added his assent that the photos definitively proved the al Qaeda leader's death.

"Upon viewing the photos, he believes that there should be no doubt whatsoever that Osama bin Laden is indeed dead," a spokesman for Lieberman said in a statement on Thursday. "Senator Lieberman also agrees with President Obama's decision not to release the photos."

Sen. Jim Inhofe (R-OK) told ABC News he viewed several photos, including one where he could see "where actually one of the bullets went in through the left eye and out the right ear."

"The type of ordinance, it has an explosion to it, so it did blow some of the brains, some of the material, out of the left eye cavity," he added. "In a couple of them you can see through the eye cavity, you can see the inner parts of the head. Obviously I'm not a doctor, so I don't know what I was looking at, but it's pretty messy." Inhofe, too, concluded that without a doubt bin Laden is dead.

Of course, the lawmakers' access to the photos won't stop skeptics from concluding that the evidence of bin Laden's death falls short. Sen. Bill Nelson said that while he agrees with the president's decision not to release the photos now, "these pictures should eventually be made part of the public record."

The Florida Democrat added that, based on the photographs, "There is no doubt in my mind - nor should there be in anyone else's - that we got the terrorist who orchestrated the insane and murderous acts that took place on Sept. 11, 2001."

Three Republican senators, including Sen. Scott Brown (R-MA), were apparently fooled by a photograph circulating shortly after bin Laden's death, which showed a photoshopped image purporting to show bin Laden after he was killed.