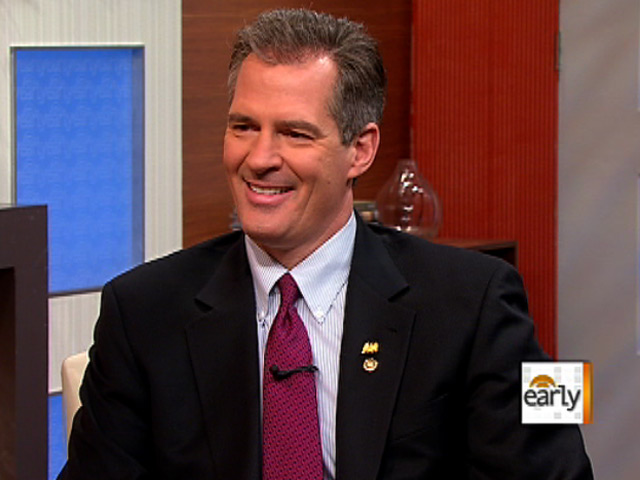 Three Republican senators who claimed to have seen images of Osama bin Laden after he was killed may have been duped.

Republican Sen. Scott Brown of Massachusetts said Wednesday that he had been fooled by a fake photograph ostensibly showing an image of bin Laden post-mortem.

"I have seen the pictures. I've received the briefings. I've spoken to the operational leaders and I can tell you for a fact that he is dead," Brown said in an interview with WBZ Wednesday morning.

He repeated that point to other news outlets as part of his argument that the images should not be released.

"Listen, I've seen the picture," he told Fox-25 TV, according to the Boston Globe. "He's definitely dead. And if there's any conspiracy theories out there, you should put them to rest."

But Brown is now telling media outlets that "the photo that I saw and that a lot of other people saw is not authentic." His office would not say who showed the senator the fake photographs.

"I saw a photo of him deceased, obviously he had been wounded....when you see the picture it clearly has his features," said Ayotte.

But Ayotte released a statement Wednesday afternoon saying that she's not sure the picture was real.

"While I was shown a photo by another senator of what appeared to be a deceased Osama bin Laden, I do not know if it was authentic," she said. "However, I do believe a photo of the dead al Qaeda leader should be released. Although some may be upset by the image of someone who has been shot in the head, releasing a photo is important to put to rest any conspiracy theories that may arise around the world and to provide for closure."

And Chambliss - the vice chair of the Senate Intelligence Committee - released an oblique statement Wednesday afternoon saying in part, "when I see the photos, I can make a judgment about the potential damage they may do."

"Apparently there was some misunderstanding about that," Chambliss told reporters as he left a vote, speaking of the image he had claimed to have seen. "I have no idea where it came from."

When asked how he, a high-ranking member of the Intelligence committee, could have fallen for photos that might not be authentic, Chambliss replied, "I was shown a photo by an individual that was represented to me as a picture of bin Laden after he's been shot that appeared to be an accurate photo. It was not an official photo." He said the person who shared the electronic photo with him was not an administration official.

The senators' initial claims seemed odd, since Senator Dianne Feinstein (D-CA), the chair of the Intelligence Committee, insisted she had not been shown the closely guarded photos of bin Laden.

President Obama told CBS News Wednesday that he would not release the images, saying "It is important to make sure that very graphic photos of somebody who was shot in the head are not floating around as an incitement to additional violence or as a propaganda tool."

Fake, photoshopped pictures of bin Laden have been appearing on the internet in the days since he was killed. It is not clear whether these are the pictures that the three senators - and perhaps others - believed were real.

House Intelligence Committee Chair Mike Rogers (R-MI) who visited the CIA this week, says he has seen the authentic pictures. How does he describe them?

"If you've ever seen a crime scene photo, there's lot of those out there with gunshots -- gunshots to the head. It's clearly what it is -- face still recognizable, but there's clear damage from a gunshot wound," he said.