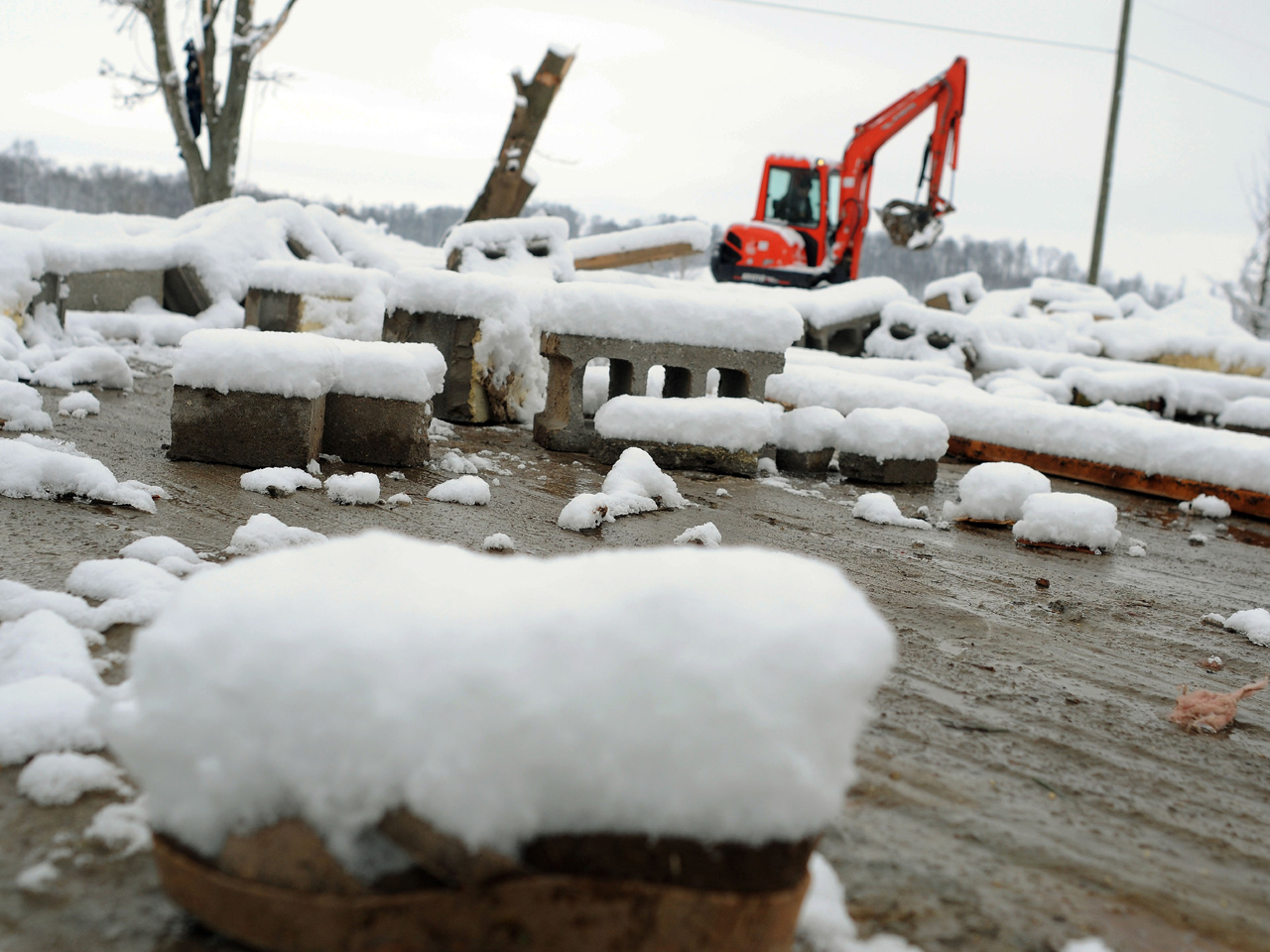 (CBS/AP) SALEM, Ind. - A 15-month-old Indiana girl who clung to life for two days after being scooped up by a tornado that killed her parents and two siblings was buried Monday in a snow-covered cemetery, a poignant end to what had seemed to be a miracle story of survival.

An American flag hung at half-staff as relatives of Angel Babcock gathered for the private burial. Angel, her mother and her 2-month-old sister were buried in one casket. Her father and 2-year-old brother were in another.

The little girl died Sunday at Kosair Children's Hospital in Louisville, Ky., after suffering severe head injuries when a tornado struck her family's home in New Pekin, Ind., and swept her into the field. Her death is one of 40 from the tornadoes that ripped through the Midwest and South on Friday.

Kendra Brough, the sister of Angel's mother Moriah Brough, told CBS This Morning about searching for her sister after the storm, only to find debris. Emergency workers who found the remains of the family said the bodies had been scattered by the tornado, which measured an EF-3 on the enhanced Fujita scale.

"I went 30 minutes after it happened," she says. "Me and my dad rushed over there. We saw that there was nothing there. We got out of the car and started walking, (amid) downed power lines and everything, just looking through the trash, yelling for them, yelling their names, to see if anyone would respond. But no one did."

The miracle survivor amid widespread devastation wrought by the storms, Angel captivated the world with her fight to live. Though found critically injured, she was opening her eyes when she arrived at the hospital in Kentucky, which workers said was a hopeful sign.

But her condition deteriorated Saturday as her brain swelled, chief nursing officer Cis Gruebbel said. As the day went on, Angel's eyes stopped moving, and there was no sign of brain activity. Her grandmother said the family decided to take her off life support, after hospital workers said there was nothing else they could do.

"I had my arm around her when she took her last breath," her grandmother, Kathy Babcock, told ABC News. "I sang to her `Itsy-bitsy spider."'

The family was buried in two caskets in the pauper section at Crown Hill Cemetery in Salem, Police Maj. Scott Ratts said.

At least two banks set up funds to benefit the Babcock family, and Ratts said contributions have come in from all over the country.

"This family had been suffering with the bad economy, and now with the storms ... I mean, they have five burials in one day," Ratts said.

Pansy Branscum, who attended Monday's burial, said she was still stunned by the loss.

"It's a tragedy that we don't understand, but God does," she said as she and her husband, Milton, carried large arrangements of red-and-white carnations to the burial site.

The tornado that killed Angel and her family was among an estimated 30 packing winds of more than 110 mph that hit the Midwest and South on Friday, according to the National Weather Service's Storm Prediction Center in Norman, Okla.

Greg Carbin, warning coordination meteorologist at the center, said the assessment of the storms is still preliminary, and a series of weaker tornadoes that also struck could boost the total number of twisters to 60 or 70.

Carbin said the fact that the outbreak occurred as early in the year as it did was a "once in a decade-type event, maybe once or twice a decade."