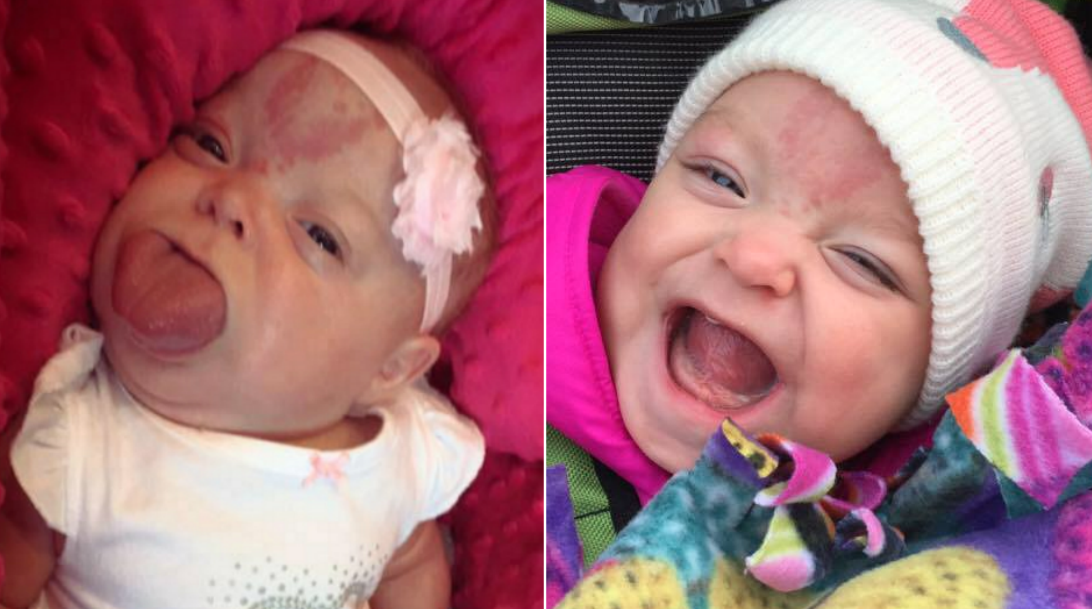 Despite all the hardships that she’s had to endure in her first months of life, 16-month-old Paisley can’t stop smiling.

The baby was born with Beckwith-Wiedemann syndrome – an overgrowth disorder that causes enlarged body parts, organs and other symptoms.

In Paisley’s case, it affected her tongue and organs.

At the time, the 21-year-old joked, “Oh cute, she likes sticking her tongue out.”

She had no idea it was actually caused by an extremely rare genetic disorder.

At 31 weeks, she gave birth to little Paisley via cesarean section.

What was supposed to be a joyous day filled with happy tears was replaced with panic and emotion that Kienow could hardly comprehend.

Her daughter had enlarged organs and a tongue so large it filled her oral cavity; the newborn had to be put on a ventilator immediately.

“It was a really emotional. It’s still emotional. I never got to touch her. I got to see her, but I was being stitched up and they just wheeled an omni bed over to me and there I saw her, you know, just tubes and cords,” Kienow told CBS News.

Doctors didn’t have a clue what was wrong, Kienow said.

But they knew they had to do something. So, they told Kienow her daughter had to be flown to a specialist three hours away – from Aberdeen, South Dakota, to Sioux Falls.

The baby was admitted to the neonatal intensive care unit at Sanford Children’s Hospital. Kienow joined her daughter the next day, as soon as she was released.

After meeting with a team of specialists who couldn’t give her any solid answers yet, Kienow initially felt discouraged. But after several weeks of different tests, doctors finally found an answer: Beckwith-Wiedemann syndrome.

“I was blaming it on me. What did I do during my pregnancy that was wrong?,” Kienow recalled asking herself. “But it was nothing that I could have prevented. It was just what she was born with. Jesus wanted me to have something a little extra special.”

Now that Kienow finally had the answers she was searching for, she started speaking to doctors about her options regarding Paisley’s enlarged tongue.

Kienow will never forget the way the doctor’s eyes beamed with satisfaction when he walked into the recovery room afterward, saying, “Wow, that was quite the surgery!”

As a muscular organ, however, her daughter’s tongue could grow back.

Luckily, her child only had to have one more tongue reduction surgery since then, which took place about three months ago.

Experts say the growth disorder generally slows down as children age, and most go on to live healthy adult lives.

Today, the 16-month-old is readjusting to her “baby tongue,” and quickly becoming “one of the most facial-expressed babies ever,” Kienow says.

It has been a thrill to see how far she’s come over the past year and a half, the proud mother said.

“She is one determined little girl; she has a lot of fight in her,” Kienow said.