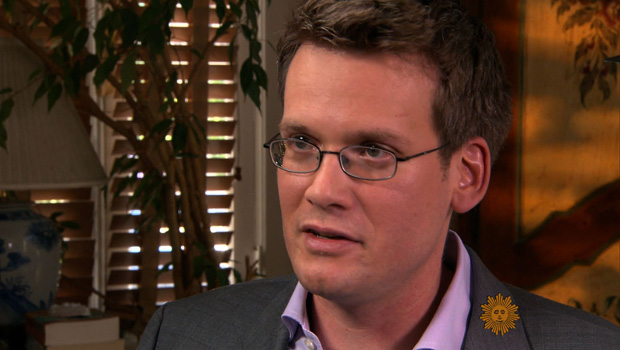 Countless young readers are starstruck by the works of John Green. Our friend David Pogue of Yahoo can explain why:

His videos on YouTube have been viewed 1.5 billion times. His latest book has been a New York Times fiction for 123 weeks. His live appearances sell out in minutes . . . .and you've probably never heard of him.

But your teenager probably has.

His name is John Green. Thirty-six, married, father of two, and cult hero to millions of young people. He's written four books, including his biggest bestseller, "The Fault in Our Stars." The movie version is about to open.

Green showed Pogue the screening room where he saw the movie with his wife, Sarah. "It was just the two of us alone in the theater and it was so romantic."

"And what was your reaction? Is it the same as a normal movie-goer's?" asked Pogue.

"No, no, 'cause I started crying during the opening credits!" he laughed.

Green's own story began in Orlando, Florida. He said as a kid he was "kind of a rule-breaker, kind of trouble. I feel bad, I want to have been ... But it's it's nice for me to draw on a lot, actually, because I was a troubled kid.

"I was anxious and depressive and I felt very socially isolated at times, but I was still intellectually curious."

Then came Kenyon College, a brief enrollment at divinity school, and a job at a children's hospital in Chicago, as student chaplain.

"When I was at the hospital, I met all of these young people who, yes, they were sick, but they were also many other things. They were funny and angry and sad, and they had all of the emotions that any other human has, all the desire, all the wishes. And that was what really resonated with me."

Green spent years trying to turn his hospital experience into a book. In the meantime, he published three other novels.

Then, in 2008, he met Esther Earl, a fellow YouTube videomaker who had thyroid cancer -- met her, befriended her, and was changed by her.

"It's not fair that Esther died," said Green. "I am angry that she was sick. I am angry that she suffered as long as she did, but her life had meaning. And understanding that was very important to me finally being able to write this story."

That story is "The Fault in Our Stars." It's a funny and unsentimental book about two teenagers who meet in a cancer support group and fall in love. The book became a sensation, as Pogue's panel of hard-core Green fans made clear.

Pogue asked, "So, if you're trying to explain to an adult about 'The Fault in Our Stars' and why you love it, isn't the reaction going to be, 'But dude, it's a cancer book - I' not going to read that'?"

"It's not about cancer" was their reply.

"It's part of the book, but it's not what it's about," said one fan. "It's really just this love story between two normal teenagers that just so happen to have a really terrible disease."

In 2007, he and his brother, Hank, began exchanging public video messages as a way of keeping in touch -- and they've never stopped.

Fans of John and Hank have become a tightly-knit community, with their own inside jokes. For starters, they call themselves Nerdfighters. Seamus, on our panel, showed off his Nerdfighter tattoo.

And then there's the acronym, DFTBA: "Don't Forget To Be Awesome."

The Nerdfighters insist that they are not a cult. But the Green brothers do motivate their followers to take action -- for charity.

"We have this big project called the Project for Awesome, which is kind of a 48-hour-long YouTube telethon every year," said Green. "This year, I think we raised about $800,000."

You can find the occasional detractor -- he's been accused of romanticizing illness. But most people have nothing but nice things to say about his writing, including the stars of the movie.

Pogue asked, "Do you feel any greater pressure when you show up on this set, knowing that you're sustaining the hopes and dreams of all these people who don't want you to mess up their book?"

"We didn't need anybody else's pressure," said Laura Dern, "because we already -- each of us -- were the obsessed fan the minute we found the book.'"

A movie of another Green novel, "Paper Towns," is already in the works.

Green gives the credit not to his own talent-but to his readers.

Pogue said, "We are led to believe that teenagers have their faces behind screens, they're anti-social now, they don't care about the world."

How The GI Bill Changed America