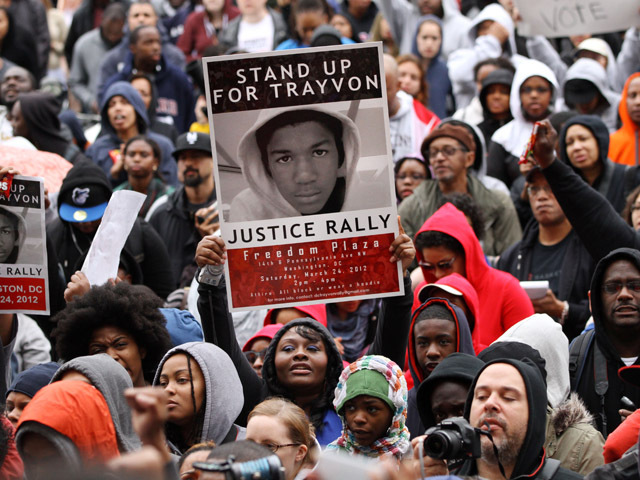 (AP) MIAMI - Attorneys for the family of Trayvon Martin and the Florida neighborhood watch captain who fatally shot the unarmed teen joined the national chorus of voices calling Saturday for justice in the case.

As demonstrators took to the streets in major cities such as Washington and Chicago to voice outrage over Martin's death, an attorney for the Martin family told board members of the National Association of Black Journalists that federal and local officials have assured the family that the case is a priority.

Zimmerman has not been charged in the Feb. 26 shooting that has ignited racial tensions and raised questions about the Sanford police's handling of the case. Martin was black, and Zimmerman's father is white and his mother is Hispanic.

"Is George a racist? The answer is no, absolutely not. He's not a racist," attorney Craig Sonner said about his client. "The incident that transpired is not racially motivated or a hate crime in any way. It was self-defense."

Sonner said he's spoken with several of Zimmerman's friends, including some who are African-American.

"They only have good things to say about him," Sonner said.

They're reluctant to come forward, though, because they fear that the backlash over the investigation will make them and their families targets, too, Sonner said.

Sonner declined to detail what transpired between Zimmerman and the 17-year-old Martin, but he said he believes the case falls under Florida's stand-your-ground law, which dictates that a person has the right to stand his or her ground and "meet force with force" if attacked.

"I believe what the evidence will show is that this case does fall under that," Sonner said. "I believe we have a good case."

If charges are brought against his client, Zimmerman would be willing to turn himself in to police, Sonner said. "We will follow the law," Sonner said.

Sonner would not say where Zimmerman was.

A spokeswoman for the Maitland mortgage risk-management firm where Zimmerman reportedly works, Digital Risk, said she couldn't confirm anything about Zimmerman's employment, but that he had not been at work since the shooting.

"Our utmost concern is for the safety of our employees, specifically based on the potential turmoil that could arise from the recent announcement of a bounty for his capture," Brandie Young said Saturday.

Amid the outcry over the lack of charges against Zimmerman, the Sanford police chief and state's attorney in the case have both stepped aside.

The U.S. Justice Department has opened a civil rights probe into the shooting, and a grand jury is scheduled to meet April 10 to consider evidence in the case.

Daryl D. Parks, the Martin family attorney, said federal officials and local officials met with the teen's family Thursday and gave them "a strong sense that (the Department of) Justice was very committed" to investigating the case.

"For us to have had all the people who were there with us and the magnitude of the conversation . this is a very high priority for this administration," he said in a wide-ranging interview with the black journalists' group in Boston.

Indeed, President Barack Obama weighed in Friday, calling the shooting a tragedy and saying, "When I think about this boy, I think about my own kids."

But Parks added "it was clear from Justice's statements that charges of a hate crime are going to be a challenge."

Parks also said the Florida Department of Law Enforcement has told the family's legal team that they know Zimmerman's whereabouts, but that it was not clear whether they are offering protection to Zimmerman, who has been in hiding and has received death threats in recent weeks.

Martin's parents also met Friday with the newly-appointed special prosecutor in the case, and the family's legal team plans to pursue a civil case against the Twin Lakes homeowner's association, Parks said.

About 400 people rallied Saturday in downtown Chicago to protest Martin's killing. In a racially divided city beset by shootings, gang violence and run-ins with police, the teen's death brought to mind the 1955 slaying of Emmitt Till, a 14-year-old black boy from Chicago who was shot and bludgeoned to death while visiting Mississippi for supposedly whistling at a white woman. His body was found in the Tallahatchie River.

No one was ever convicted, but Till's killing galvanized the civil rights movement.

"It's a precedent that with the right excuse it's OK to gun down black males," protester Ashten Fizer said of Martin's killing. "It's a return of Jim Crow."

In Washington, a large crowd gathered in Freedom Plaza to call for justice in the shooting.

Among the demonstrators Saturday was Jimmy Neal, a District of Columbia resident who said his daughter has been asking him questions he didn't want to answer.

"She's asked me the question ... `Why, daddy, when he was carrying candy and a soda or iced tea and why did the man kill him?' I had to explain that to her. And those are discussions you don't plan to have with your kids," Neal said.

"Hoodie Marches" were organized Saturday in two South Carolina cities over social media. Many of the people participating carried bags of Skittles and wore hooded sweat shirts, like the one Martin wore when he was killed.

Martin was holding a bag of the candy while walking to his father's fiancee's home from a convenience store when Zimmerman started following him, telling police dispatchers he looked suspicious. At some point, the two got into a fight in the gated community and Zimmerman pulled out his gun.

Meanwhile, authorities say a Florida man is charged with threatening the police chief who temporarily stepped down from the investigation.

Stewart was placed on electronic monitoring as a condition of his $10,000 bond.