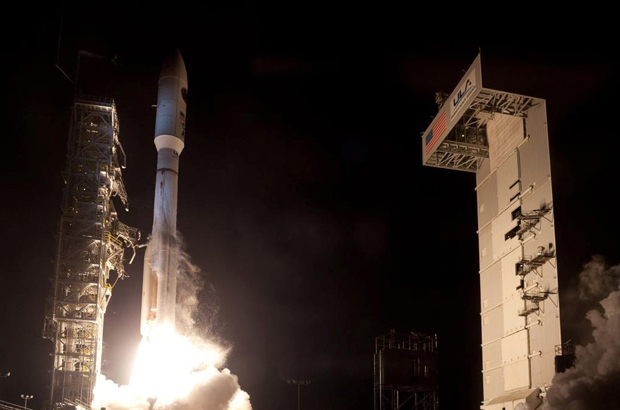 Spewing a torrent of fiery exhaust, the booster quickly climbed away from its launch pad at Vandenberg Air Force Base northwest of Los Angeles, arcing away to the south toward a polar orbit favored by reconnaissance satellites.

The first stage engine and strap-ons appeared to perform normally during the initial moments of the rocket's climb out of the dense lower atmosphere, but as usual with classified NRO missions, United Launch Alliance ended commentary about four minutes after liftoff and the rest of the ascent was carried out under a communications blackout.

Generating some two million pounds of thrust at liftoff, it was the most powerful Atlas 5 variant ever launched from Vandenberg and only the third overall. NASA's Curiosity Mars rover, launched from Cape Canaveral in 2011, used the same "541" version of the Atlas 5 as did another secret NRO mission launched from Florida earlier this year.

The rocket launched Friday featured a modified Centaur second stage engine making its first flight. Known as the RL10C-1, the hydrogen-fueled engine, originally developed for use with ULA's Delta rockets, generated some 22,890 pounds of thrust and featured a shorter nozzle and upgraded avionics to control propellant mixture ratios.

With a news blackout in place, details about how the engine performed during the NROL-35 mission were not immediately known. But an Air Force statement released after launch called the mission a success.

"This launch was an incredible achievement for team Vandenberg, ULA, NRO and our other fellow launch partners," Col. Keith Balts, 30th Space Wing commander, said in the statement. "This Atlas 5 launch marked the last of the year, and I am very proud of the teamwork that led to the success of not only today's launch, but those that preceded. The hard work and dedication of everyone involved continues to ensure our nation's access to space."