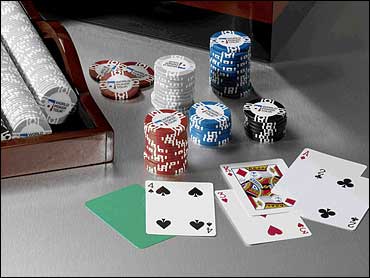 In the parlance of No Limit Texas Holdem, a player who is dealt king-jack (K-J) is said to be holding "Kojak."

The hand is named after the television character played by the late Telly Savalas who was a regular in the highest stakes poker games in Las Vegas when he was not filming movies and television shows. Though Savalas has been dead for 13 years, Kojak reigned supreme at the inaugural Executive Poker Tour event which took place recently in Atlantic City.

The brainchild of Virginia businessman Rick Rahim, the EPT is modeled on the most popular poker show on television, Game Show Network's "High Stakes Poker." On that show a group of top professional players gather weekly before the cameras to play high stakes poker. Each player buys in for a minimum of $100,000. Actor Gabe Kaplan provides commentary from the booth, as the players compete for pots that routinely grow larger than most of us earn in a year.

The EPT consists of five poker games, played in different U.S. cities. In each one, ten successful local businessmen and women will play No Limit Texas Holdem before the television cameras. Each will start with $100,000. By agreement, ten percent of each player's winnings will be donated to the sponsoring charity, Project Lifesaver.

I was among the ten players at the first EPT event. The lineup included an assortment of lawyers, insurance agents, and business owners. All of us are enthusiastic amateur poker players, but none of us are accustomed to playing for stakes that high. Like most of the others, I depended on a group of backers to help fund my $100,000 buy-in. Happily, my backers doubled their money as I was one of the players fortunate enough to be dealt "Kojak" at the right time.

The game started off slowly as everyone played cautiously, being unaccustomed to the television cameras, the crowd of onlookers, and risking six-figures at a poker table. The idea that your concealed hole cards would some day be seen by television viewers seemed to dampen the willingness of some players to employ their usual wild style. No one wants to look foolish on television and lose a big pot bluffing with a garbage hand.

I lost $10,000 in the first pot I played, but recouped most of it when I flopped a flush to beat two other players. Then Kojak appeared and the first big pot of the night developed. Andrew, a Washington lawyer, opened the pot in early position holding K-J. He was called by Rhett, an insurance agent who holds the distinction of having made it to the final table of the World Series of Poker championship event a few years ago. Rhett held A-Q and was a solid favorite to win the pot when the flop came Q-10-4. Andrew needed a king, nine or ace to win.

Perhaps fearing that Andrew held A-A or K-K, Rhett just called. The dealer turned over a 6, which was no help to Andrew. Rhett was now a 77 percent favorite to win the hand. Still, Andrew bet again. Rhett called. When the dealer turned over a 9, completing Andrew's straight, Andrew bet $30,000, the biggest bet of the night thus far. After long deliberation Rhett called, and watched grimly as half his stake was pushed to Andrew.

About a half hour later I was dealt K-J in late position. I raised and Rick called from the small blind. The flop brought thee garbage cards, 8-6-2. Rick immediately bet $10,000, which was considerably more than the size of the pot. I figured he was bluffing, and raised to $20,000 representing a big pair and figuring he would fold. He called. The next card was a harmless looking 3. Rick checked and I bet $20,000 again, figuring he would fold. He called again. The last card was a 7. Rick checked again, and I bet $35,000, figuring once again that he would fold. He thought for a long time, and finally turned over his hand showing Q-Q! Needless to say I had no idea his hand was that strong.

I tried to maintain a confident look, as he talked to himself about whether to call or fold. Finally, he persuaded himself that I must have either A-A or K-K, and he folded. I showed him a jack, leading Rick and the rest of the table to assume that I had held J-J and had mistakenly thought I had the best hand. Because of my image as a conservative player, no one thought I had put $75,000 in the pot on a bluff. And I did not want to disabuse them of that view.

I was luckier than I deserved. My game plan going in was to play aggressively against everyone except Rick, who has a reputation for liking to play big pots and who will make an "all-in" bet no matter what he holds, putting you to a difficult decision. I vowed I would only mix it up with him when I had a strong hand and was willing to risk my whole stake. I had abandoned the game plan and it could easily have cost me most of my chips. I took a short break, breathed a sigh of relief, and reminded myself not to do that again.

For the next few hours I concentrated on picking on the conservative players, most of whom were playing cautiously.

Then I was dealt Kojak again. Like the previous time I was in late position, but this time both cards were hearts. By the time the action came around to me seven players were in the pot for $400 each. I raised to $3,000 hoping to win it right there or at least narrow the field to two or three players. Only one player called my raise. Tom, one of the leading Supreme Court lawyers in Washington, had entered the game late when another player took a long break. Like Rick, Tom loves to play a hyper-aggressive style. If you get involved in a pot with Tom, you can expect all your chips to end up in the middle of the table.

The dealer brought me a beautiful flop: J-9-5 with two hearts. Not only did I have the top pair, I also had a flush draw for backup. Tom checked and I bet. He check raised me $10,000 and I moved all in. Tom knows me well enough to know that I would not do that without a strong hand, and I expected him to fold. When he said instantly "I call" I was startled and a bit concerned. But when I turned over my hand his face dropped and I knew I was in good shape. It turned out he had the 8-6 of hearts. He thought he had a huge drawing hand, and that he could win the pot if any heart or any 7 came. But I had higher hearts, which meant there were only three cards in the deck that would help him - the three non-heart sevens. Fortunately for me no sevens appeared and I scooped a $230,000 pot, the biggest of the night. For the third time a big pot had been won by Kojak.

I went to bed at 2:30 am, but the game continued. I learned the next day from Tom that he had recouped all the chips he lost to me in a hand where he held (you guessed it) K-J. The flop had come J-J-4. Rick held A-A and another player (Ethan) held J-9. All three checked on the flop, disguising the strength of their hands. When a king was dealt on fourth street, Tom made a full house. Ethan made a substantial bet with his three jacks. Tom just called and Rick raised. Ethan called the raise and Tom re-raised. Rick moved all in. Figuring he was beaten by either Rick or Tom, Ethan made a tough laydown. Tom called and doubled up at Rick's expense.

It remains to be seen how the television audience responds to the Executive Poker Tour when it is broadcast, but thanks to Kojak I had a great time. I cashed out a solid win, ten percent of which I happily donated to Project Lifesaver.