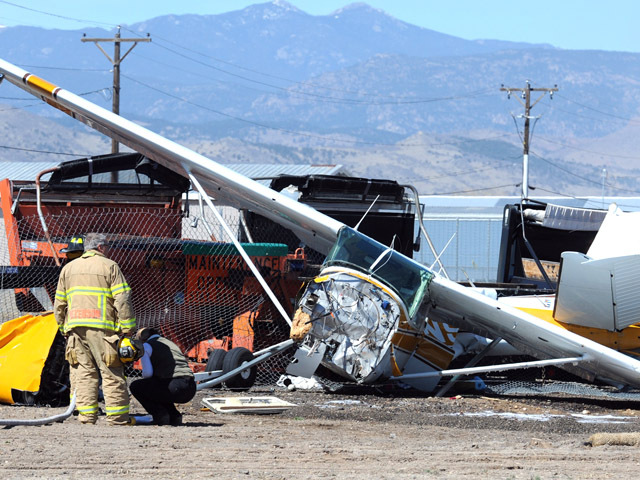 (AP) LONGMONT, Colo. - At least two people were killed after crashes of two single-engine planes that may have collided Friday while in the air north of Denver, authorities said Friday. One person survived.

A Cessna 180 went down near a small airport in the city, while a Cessna 172 crashed about a half-mile from a Walmart southeast of Longmont, close to two homes, police said.

"We were very fortunate neither home appeared to be in danger," police Cmdr. Jeff Satur said.

Two people died in the plane that crashed near the Walmart, said Gracie Marquez, deputy coroner for Weld County.

Satur said the occupants appeared to be male and were believed to be an instructor pilot and a student who had taken off from Rocky Mountain Regional Airport near Broomfield, 16 miles away.

Dustin Nelson, who was working nearby for an oilfield services company, said he and others rushed to the scene.

"By the time we got there, there was just nothing we could do," said Nelson, 25, of Longmont. "Everything was crumpled into each other. It just looked like a smashed beer can ... The tail end is literally in the nose of the plane."

Kim R. Johnson, who was in a parking lot off County Road 1, said the Cessna 172 appeared to have damage to one wing. He said it crashed with a thud.

"I was expecting an explosion, and it was just a big thud," he said.

He said the other plane banked, circled the crash site then headed west.

Lewis said the pilot of the other plane crashed about 1,000 yards from the Vance Brand Airport runway after clipping four overhead power lines, causing about 132 customers to temporarily lose power.

"It actually probably saved her because those lines reduced the impact into the ground," Lewis said. "The pilot did an excellent job of clearing the roadway and avoiding people who were picnicking and watching airport operations."

Passers-by pulled the pilot from the plane, which was leaking fuel. The pilot complained of back injuries but was able to tell a fire lieutenant at the scene how to turn off the fuel pump, Lewis said.

The plane was registered to a Beverly Cameron, of Erie. A patient with that name was listed in good condition at Longmont United Hospital Friday afternoon, hospital spokeswoman Karen Logan said.

The survivor has been released from a hospital, police said.

Satur said her plane had taken off from the airport near the site where it crashed.

Firefighters sprayed the wreckage with foam and built a berm around it to contain leaking fuel.

The engine separated from the plane on impact. One wing was crumpled and the tail was bent.

Don Poncelow had just landed at the Longmont airport after a training flight with an instructor pilot when he saw a plane coming in low.

He said that after the plane clipped the power lines, it skidded across a road and crashed into a fence.

Poncelow said his instructor waded across a drainage ditch to get to the wreckage and help the pilot.

Carissa Muilenburg of Mile High Skydiving Center at the airport said one of their planes was landing around the time of the crash after ferrying skydivers to a drop.

She said the skydiving pilot reported that there was a mayday call because of the incoming plane and he had to quickly get off the runway after landing.

Near the Walmart, Tom Ruddick was on a ladder painting oilfield equipment when he saw two planes that appeared to be about 300 yards apart and heading toward each other.

Nelson, who was working with Ruddick, was in his truck and heard what sounded like two backfires in the sky.

"It was a pop and about two seconds later, it was another pop," he said. Then he heard the engine rev up. "I seen that plane just nosedive straight to the ground just behind that house," Nelson said.

Ruddick had looked away from the planes but said he heard and felt what he believes was the shock wave from one plane crashing into the ground.

"It almost knocked me off my ladder," Ruddick said.

The other plane looked like it was having difficulty flying and even appeared to be "hovering," he said.

"It looked like he had no engine, like he was trying to pull up but he couldn't," he said.