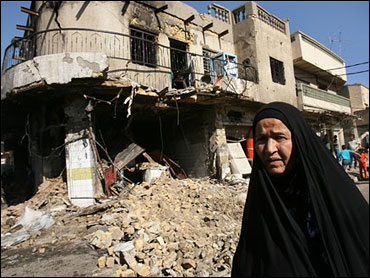 Iraqi Prime Minister Nouri al-Maliki promised Tuesday to show "no mercy" to terrorists and said his long-awaited security plan for Baghdad will include a curfew and a ban on personal weapons.

Highlighting the stakes, President Bush made a surprise visit to Iraq to meet al-Maliki and discuss the nation's next steps. The president was expected to be in Baghdad a little more than five hours.

Security officials said 75,000 Iraqi and multinational forces would be deployed throughout Baghdad on Wednesday, securing roads, launching raids against insurgent hideouts and calling in airstrikes if necessary.

Violence, meanwhile, was unrelenting, with a series of explosions struck the oil-rich northern city of Kirkuk, killing at least 16 people.

Mr. Bush's visit came on the final day of a two-day work session aimed at keeping up the momentum generated by last week's swearing-in of key Iraqi national security officials, and the U.S. airstrike that killed Abu Musab al-Zarqawi, the leader of al Qaeda in Iraq.

Al-Gharrawi told The Associated Press that the plan to be launched at 6 a.m. Wednesday would be the biggest operation of its kind in Baghdad since the U.S. handed over sovereignty to Iraq in June 2004.

He warned insurgents were likely to step up activity ahead of the security crackdown and as revenge for al-Zarqawi's death. He said the ground forces could call in air cover if needed.

"We are expecting clashes will erupt in the predominantly Sunni areas," he said. "The terrorists will escalate their violence especially during the first week as revenge for the killing of al-Zarqawi."

He also said; "Baghdad is divided according to geographical area and we know the al Qaeda leaders in each area."

Iraqis have complained of random violence and detentions by Iraqi forces, especially the police, which are widely believed to have been infiltrated by so-called sectarian death squads.

Al-Gharrawi said there were plans for a single uniform to distinguish legitimate forces in the coming days.

"There will be a special uniform with special badges to be put on the vehicles as a sign that it belongs to our forces," he said, adding the prime minister would decide when to end the crackdown.

"The terrorists cannot face such power," he said.

Al-Maliki said the plan "will provide security and confront the terrorism and ... enable Iraqis to live in peace in Baghdad."

"The raids during this plan will be very tough ... because there will be no mercy toward those who show no mercy to our people," he said in a news release distributed Tuesday.

The attacks in Kirkuk began at 7:45 a.m. when a parked car containing a bomb exploded near a police patrol in the city center, killing 10 people, including two policemen, Brig. Gen. Sarhat Qadir said. Nine people were wounded.

Another suspected suicide car bomber in Kirkuk Tuesday tried to hit a Kurdish political office in the city about 180 miles north of Baghdad at 8:30 a.m., but guards opened fire on that car, and it exploded, police Col. Taieb Taha said. Three civilians were wounded.

A suicide car bomber targeted a police patrol south of Kirkuk more than an hour later near an institute for the disabled. The explosion killed the driver of a civilian car nearby and wounded six, Qadir said.

At least 20 other violent deaths were reported Tuesday, according to police.