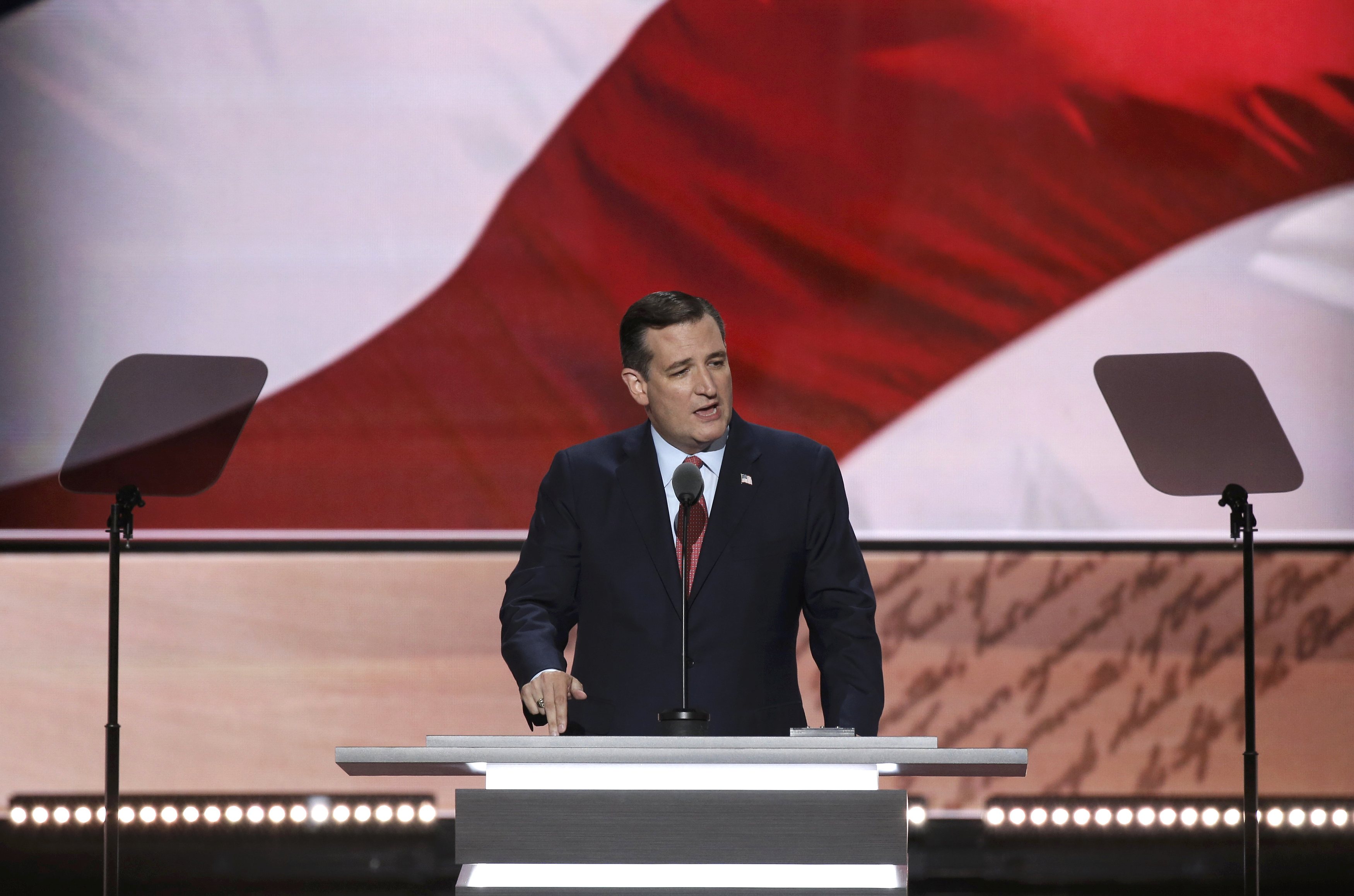 Ted Cruz just became the first primetime speaker of this Republican convention to be booed off the stage.

The Texas senator mentioned Donald Trump's name just once during his Republican convention speech Wednesday -- and it wasn't even an endorsement.

"I want to congratulate Donald Trump on winning the nomination last night," the Texas senator said, addressing the Cleveland gathering on its third evening. "And like each of you, I want to see the principles that our party believes prevail in November."

And then Cruz, whose primary battle with Trump turned increasingly bitter when the billionaire businessman attacked Cruz's wife and his father, pivoted to this: "Conventions are times of excitement. But given the events of the last few weeks, I hope you'll allow me a moment to talk to you about what's really at stake."

The Texas senator went on to mention the horrific shootings of police officers in Dallas, and the other recent incidents of violence across the United States.

Americans now "live in a world where so many others have had their lives destroyed by evil, in places like Orlando and Paris and Nice and Baton Rouge," Cruz said.

And that's why, the senator said, "we're fighting -- not for one particular candidate or one campaign -- but because each of us wants to be able to tell our kids and grandkids...that we did our best for their future, and for our country."

"We deserve leaders who stand for principle," continued Cruz, who agreed to a convention speaking role after a private meeting with Trump in Washington, D.C. earlier this month. "Unite us all behind shared values. Cast aside anger for love. That is the standard we should expect, from everybody."

But despite what sounded like appeal for unification, Cruz never once urged Republicans to rally behind their nominee.

Instead, Cruz -- repeatedly nicknamed "Lyin' Ted" by Trump during the primary race -- uttered the clarion call for the convention's anti-Trump "Free the Delegates" movement, prompting Americans to "vote your conscience."

"To those listening, please, don't stay home in November," he said. "Stand, and speak, and vote your conscience, vote for candidates up and down the ticket who you trust to defend our freedom and to be faithful to the Constitution. It's love of freedom that has allowed millions to achieve their dreams."

When delegates from New York loudly urged Cruz from the convention floor to "say it" -- referring to endorsing Trump -- the Texas senator only responded: "I appreciate the enthusiasm of the New York delegation."

Cruz then exited to loud booing from the crowd.

Newt Gingrich, the former House speaker and Trump surrogate who followed Cruz in the line-up, attempted to defend the Texan's statements to angry delegates on the convention floor.

Gingrich told the crowd: "I think you misunderstood" Cruz's sentiments.

Trump himself didn't seem to mind Cruz's convention speech, calling it "no big deal" that his former opponent had refused to back him, though he pointed out in a tweet late Wednesday that the Texas senator "didn't honor the pledge" of loyalty signed last year by all GOP White House hopefuls.

"After a long and spirited primary, the time for fighting each other is over," he said. "It's time to win in November."

Rubio, who is fighting for Senate re-election in Florida, chose to remain in his home state during the convention.

Wisconsin Gov. Scott Walker, also a one-time rival of Trump's, told the Republican convention that "we must support Donald Trump and Mike Pence."

But Walker's endorsement of the GOP ticket amounted to little more than a campaign against Democratic nominee Hillary Clinton.

"Hillary Clinton is the ultimate liberal Washington insider. If she were any more on the 'inside,' she'd be in prison," Walker said, to raucous applause. "A vote for anyone other than Donald Trump in November is a vote for Hillary Clinton."

Clinton was quick with a tweet of her own:

Trump, for his part, thanked Walker for his speech Wednesday night in a tweet, mentioning "@ScottWalker" in the social media post.

But not before he used the wrong twitter handle for the Wisconsin governor in an earlier tweet:

"@ScottWalker6" is an anchor for NBC News' New Orleans affiliate television station. The tweet was later deleted from Trump's account.