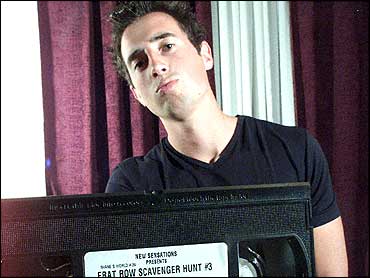 Arizona State University has spent the last couple decades trying to upgrade its national academic standings and downplay its reputation as a party school.

But as the fall semester is set to begin, the university's image has another black eye.

An unknown number of ASU's fraternity members plus a student vice president are being investigated for allegedly appearing in a pornographic video shot on campus last September.

University officials didn't learn of the video's existence until last month. They now have launched an investigation to determine if the students involved violated ASU's code of conduct, which includes clauses against the unauthorized use of university property and sexual misconduct on campus or within organizations.

Punishment ranges from probation to expulsion.

ASU president Michael Crow said the university already has consulted with the Arizona Attorney General's Office and the campus police department about the matter.

"The actions of the Arizona State University students who participated in — or tolerated — the making a sexually explicit video in several ASU fraternities constitute behavior that is completely and utterly unacceptable," Crow said in a statement. "Inappropriate behavior at ASU, within the guidelines and procedures of our disciplinary process, will be dealt with swiftly and with appropriately severe penalties."

The investigation by ASU's campus judicial affairs office could take up to six weeks to conclude.

"I think it's awful. Those people are all a bunch of pigs," said Kelly Quinlan, a graduate student in the business college.

"I saw a story on TV about it in the dormitory. Everyone in the room seemed shocked to hear about it," said Matt Jobin, a senior majoring in industrial studies. "If freshmen were on campus with their folks and they heard about this, they might think differently about ASU now."

Playboy magazine consistently rated Arizona State as one of the nation's top "party schools" in the 1980s.

"It used to be in the top five but I don't think ASU is even ranked anymore," Jobin said. "Any school is a party school these days."

The video attempted to prevent identification by blacking out the participants' eyes and any fraternity logos.

Still, many students said they would like to watch the tape, which local adult stores say is a frequently rented video.

"I haven't seen it yet but I'll look for it," said Alex Ebner, a junior majoring in business. "It sounds pretty exciting."

The Arizona Republic reported that a California video company drove up to various ASU fraternities in a limousine and asked frat members to be part of a sexual scavenger hunt.

However, the newspaper said frat members never participated in sexual intercourse with the women but they used sex toys and other objects.

Brian Buck, the new executive vice president of the Associated Students of ASU, acknowledges he's in the video and is featured in a shower scene.

"I'm not apologizing for anything I did. The way I see it is 200 fraternity guys having a good time," Buck told the Republic, adding he doesn't believe he'll lose his student government job because he wasn't in office at the time of the video shoot.