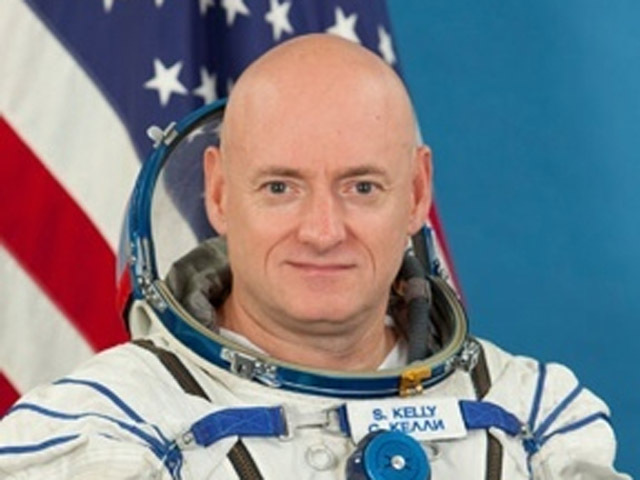 When astronaut Scott Kelly told his nine-year-old daughter he was going to spend a full year aboard the International Space Station, she exclaimed "awesome!"

When cosmonaut Mikhail Kornienko told his wife the same thing, "she started crying."

But both men said Wednesday they were looking forward to blasting off in March 2015 and spending a full year in orbit, serving as medical guinea pigs to help scientists learn more about the long-term physical and psychological impacts of extended, confined flights in the weightless environment of space.

"I personally think our ultimate destination, at least for a long time in our planet's future, is getting to Mars," Kelly told CBS News. "And I look at this as a step towards that."

Alexey Krasnov, director of manned space operations for Roscosmos, the Russian federal space agency, agreed, saying through a translator "I hope this one-year duration expedition will help us achieve these tasks."

A flight to Mars, possibly in the 2030s, is expected to take seven to 10 months, followed by a lengthy stay in the reduced gravity of the red planet and then an equally long trip back to Earth.

Space station astronauts and cosmonauts typically spend up to six months aboard the international lab complex and researchers are eager to find out how the adaptation process might change -- and what might need to be done about it -- for longer-duration missions.

The spaceflight duration record holder is cosmonaut Valery Polyakov, who spent 438 days aboard the Russian Mir space station in 1994 and 1995. The U.S. record for the longest single spaceflight is held by astronaut Michael Lopez-Alegria, who spent 215 days in space aboard the International Space Station in 2006-07.

But the upcoming flight with Kelly and Kornienko will set a new record for NASA and it will be the first to employ the full range of modern medical protocols and research procedures over a 12-month period.

Igor Ushakov, a senior medical researcher with the Russian space program, said astronauts and cosmonauts already run a 7 percent risk of having a problem that requires medical care after a six-month flight.

"So the risk will double, so for at least one of the two it will be 14 percent for the yearlong expedition," he said. "I would like to knock on wood that it won't happen, the worst scenario. But the risk is increased, that's for sure."

Even so, he reassured reporters, "the cosmonauts who were in space for a year or more, they all are alive and well today."

"There's a legend among cosmonauts," he said through a translator. "When one of the cosmonauts was asked how he was feeling, he showed his thumb. And when they asked what do you want, he said 'I want to have a smoke and to kiss my wife.' So you can tell by this answer that the guy who came from a long-duration flight is in a good mood!"

Kelly said was up to the challenge, but he acknowledged it won't be easy.

"My greatest concern is just missing the people, your loved ones, your family, your friends on a personal level that you're attached to on the ground," he said.

Another issue: the sheer routine of life in a confined space.

"You know, in the morning you wake up, you're at work. When you go to sleep, you're also at work," Kelly said. "Imagine being in your office for a whole year and you never get to leave. That is a challenge, it presents its own set of issues, but I think I'm up for it and I look forward to it."

Like all space station crews, Kelly and Kornienko will enjoy regular video chats with friends and family. They will be able to send and receive email and make phone calls via the internet when the station is within range of a NASA communications satellite. The station boasts an extensive video collection and books, along with a variety of musical instruments and players.

But Kelly said mission "fatigue" may set in at some point

"I think in a lot of ways it'll be similar to those challenges that people do that are kind of considered type-two fun, you know, it's fun when you're done with it, not while you're doing it. Like climbing Mount Everest, or something like that," he said. "Not the type fun you have riding a roller coaster.

"I think in a lot of ways it'll be like that. I suspect, when you have like a third (of your time) left of something of a certain duration ... is when that fatigue level people generally see will be building up. I suspect I won't see that after six months, I'll kind of see that towards the end, hopefully not at all."

Kelly is divorced and has two daughters. His twin brother Mark, married to former congresswoman Gabrielle Giffords, also is a veteran shuttle commander. He retired from NASA last year.

"They were all very supportive," Scott Kelly said of his family. "As far as like a specific reaction, the only one that comes to mind is my 9-year-old daughter, when I told her on the phone that I was going to spend a year on the space station, she screamed out 'awesome!'"

Kornienko also is a space station veteran, logging more than 176 days in orbit as a flight engineer during Expeditions 23 and 24 in 2010.

"I had some doubts, because, you know, a year is a serious time," he said. "My wife, of course, she started to cry. That was her reaction."

From his perspective, "it's a unique opportunity for us," he said. "Before, only four Russian cosmonauts did that. ... I'm a professional, it's my job. And of course, I'm very eager to do this. I understand it won't be easy."

Before, during and after their marathon stint in space, both men will be subjected to a battery of tests to measure their adaptation to weightlessness and what, if any, long-term effects might emerge.

"I would frame it as a pilot study or a spot check," Robinson said in an interview. "So we are building from ISS a significant body of understanding, on both what the effects are on the human body and also how to prevent those effects.

"For many areas, we think what we've developed for six months is enough. But it's those pieces that aren't that way -- radiation is one, vision could be one, behavioral health issues could be another -- if there are areas where even a little bit longer than six months is a challenge, that becomes an important risk as we start looking towards Mars missions."

Webcams Spying: It's More than Software