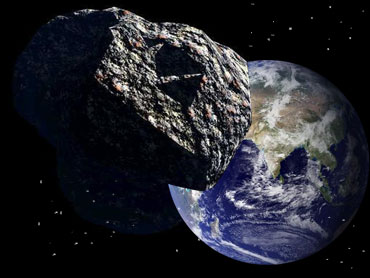 An asteroid about the size of one that blasted Siberia a century ago just buzzed the Earth.

The asteroid named 2009 DD45 was about 48,800 miles from Earth when it zipped past early Monday, NASA's Jet Propulsion Laboratory reported.

That is just twice as high as the orbits of some telecommunications satellites and about a fifth of the distance to the Moon.

"This was pretty darn close," astronomer Timothy Spahr of the Harvard-Smithsonian Center for Astrophysics said Wednesday.

The space rock measured between 69 feet (21 meters) and 154 feet (47 meters) in diameter. The Planetary Society said that made it about the same size as the asteroid that exploded over Siberia in 1908 and leveled more than 800 square miles of forest.

Scientists at the Siding Spring Observatory in Australia spotted 2009 DD45 and began tracking it in late February when it was about 1 million miles away.

Spahr said he knew within an hour of that discovery that it would pose no threat to Earth.

Of the known space rocks, the next time an object will get closer to Earth will be in 2029 when an 885 foot asteroid called 99942 Apophis comes within 20,000 miles, said Donald Yeomans of NASA's Near-Earth Object Program at the Jet Propulsion Laboratory in Pasadena.

Last year, the asteroid 2008 TC3 harmlessly burned up in Earth's atmosphere over Africa 19 hours after it was discovered. Astronomers gave a six-hour notice warning of that fiery plunge.