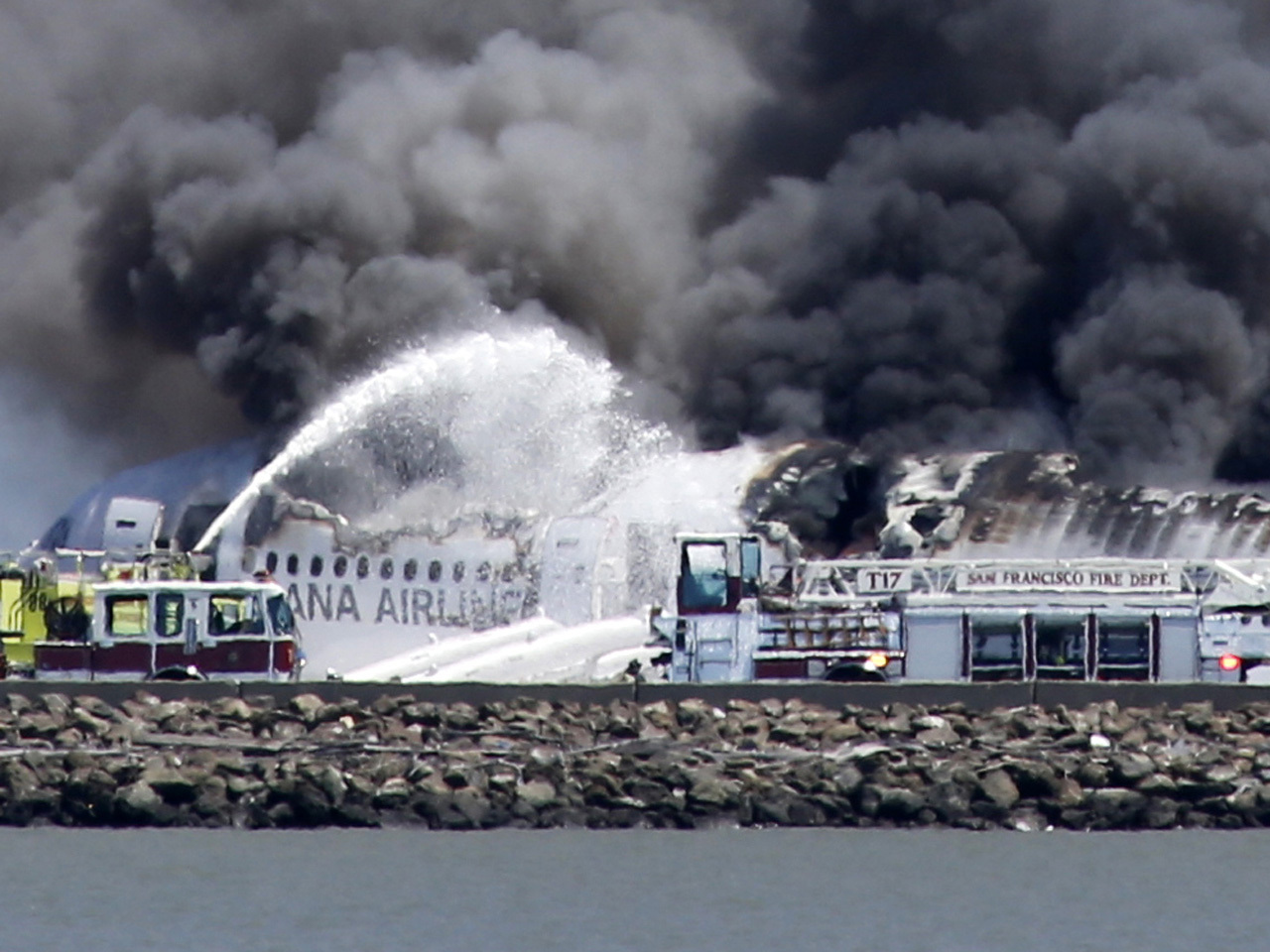 The sudden, unheralded nature of Aviana Airlines Flight 214's crash in San Francisco on Saturday afternoon seems to have taken even the jet's trained crew by surprise in the crucial, chaotic moments after it came to rest just beyond the seawall at the end of the runway.

After the Boeing 777-200 that originated in Seoul, South Korea, hit the seawall barrier at the end of the runway, snapping the tail right off the aircraft, San Francisco resident and crash survivor Benjamin Levy said the crew was simply "overwhelmed."

He said there was no verbal warning from the pilot or crew before the impact.

So far, 305 of the 307 passengers and crew survived the crash. At least 181 people have been transported to area hospitals, 49 with serious injuries.

San Francisco General said early Sunday morning that the hospital had received 53 patients, including at least 26 children. Six of those patients were reported in critical condition, including one child. Hospital spokeswoman Rachael Kagan said 4 other adults and one child who arrived in critical condition have since been upgraded to serious. The ages of the children were not immediately given.

There were seemingly several mitigating factors making the crash less deadly than possible, even with the crew overwhelmed. First was the fact that the plane did not disintegrate when its tail hit the seawall upon landing, despite coming in at an "odd angle," according to what eyewitness Kate Belding told CBS affiliate KCBS in San Francisco.

Kelly Thompson, another eyewitness on the ground, told KCBS she heard a "horrible thud," and then watched as "the airliner bounced and then slid to a stop on the runway."

Anthony Castorani, who told CBS News he watched the crash from his hotel room near the airport, said the plane performed a "side motion diagonal cartwheel" after hitting the runway.

Survivor Levy said there was no fire immediately following the plane going down, likely enabling people to escape. With a fire, there probably would have been a lot more deaths

"There was a bit of chaos, but I think we managed to get everybody to calm down pretty quickly, and really start getting out. Not pushing on each other, not stepping on each other. So it felt like it went pretty fast," Levy said.

San Francisco Fire Department Chief Joanne Hayes-White said the two people who died were found on "the exterior" of the plane. San Mateo County Coroner Robert Foucrault told the San Jose Mercury News that one appeared to have been thrown from the rear of the plane when the tail broke off, and the other was found near the wreckage. State broadcaster China Central Television said the two victims were Ye Mengyuan and Wang Linjia, students at Jiangshan Middle School in eastern China.

The South Korean airline said in a statement that Ye and Wang were both 16.

"Having surveyed that area, we're lucky that there hasn't been a greater loss," fire chief Hayes-White said.

Levy said only after most people were off the plane did he see "fire a lot more, smoke coming out, explosions coming out."

Levy said he was accustomed to flying into San Francisco and as the plane made its approach Saturday, he looked out the window and thought the water below seemed to be much closer than usual.

"Maybe 10 feet above the water and we're not even on the runway -- I don't see any runway, I just see water. So I'm realizing, we're way too low, but i'm just like, eh, he's gonna make it, he knows what he's doing," he told a gaggle of news reporters. "Well, that wasn't the case, somehow we hit the tarmac."

He said he felt extremely lucky to have escaped with just bumps and bruises.

Although there has been no official word on the possible causes of the crash, in a press briefing held Sunday in South Korea, Asiana Airlines CEO and President Yoon Young-Doo pointed out that "veteran pilots" were flying he plane and said that the accident likely did not occur from pilot error. He also said that error on the part of mechanics has "yet to be confirmed."

The National Transportation safety board has launched a full-scale investigation. NTSB Chairman Deborah Hersman told Fox News investigators have collected the cockpit voice recorder and the flight data recorder and were able to send them out on a red eye back to D.C.

"We hope our team and lab will read them out today," Hersman said. "The cockpit gives a sense of the conversation, the workload, what was going on inside the cockpit between the pilot, not just in the moments of the crash but in the minutes and hours before the crash."

Hersman added: "Of course our focus right now is on the perishable information."

CBS News aviation and safety analyst Capt. Chesley Sullenberger said it was possible that ongoing construction at San Francisco International Airport would be examined as a factor in the Asiana crash.

Sullenberger, the famed Bay Area pilot who landed the "Miracle on the Hudson" flight, said the construction might have been a contributing factor impacting landings at the facility. He said that the FAA-mandated construction is intended to increase the safety zone of the runway by moving it farther away from the seawall near where the plane crash landed.

The Reuters news agency reported that a widely-used landing assistance system known as "glide path" had been turned off at San Francisco International for much of the summer, and while it was not unusual for the system to be turned off during good weather conditions, it would likely be another factor for investigators to consider.

"The pilots would have had to rely solely on visual cues to fly the proper glide path to the runway, and not have had available to them the electronic information that they typically have even in good weather at most major airports," explained Sullenberger.

As officials try to figure out what went wrong, families of survivors and victims were being notified late Saturday and Sunday. Asiana Airlines released the nationalities of the people on board the flight: 77 Korean citizens, 141 Chinese citizens, 61 U.S. citizens and 1 Japanese citizen.