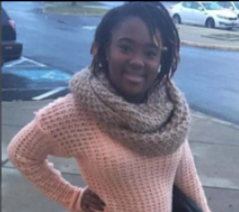 CHARLOTTE, N.C. -- Police say the body of a missing 19-year-old Virginia woman has been found behind a North Carolina church.

"It is with deep regret that I inform the community that Ashanti Billie has been located, deceased, in Charlotte, North Carolina," said Martin Culbreth, Special Agent in Charge of the Norfolk Division of the Federal Bureau of Investigation, according to CBS affiliate WTVR. "I, along with the entire investigative team, offer our most sincere condolences to the Billie family, especially Ashanti's parents Brandy and Tony. Our thoughts and prayers are with you."

Billie was reported missing nearly two weeks ago when she didn't show up for work at a sandwich shop in Norfolk, Virginia. The FBI says her cellphone was found in a trash bin and her car was abandoned.

Police say the medical examiner confirmed Billie's identity. Police didn't release a cause of death or if they know how the teen ended up in North Carolina.

Charlotte-Mecklenburg Police said in a release the FBI and several other agencies are helping with the investigation.