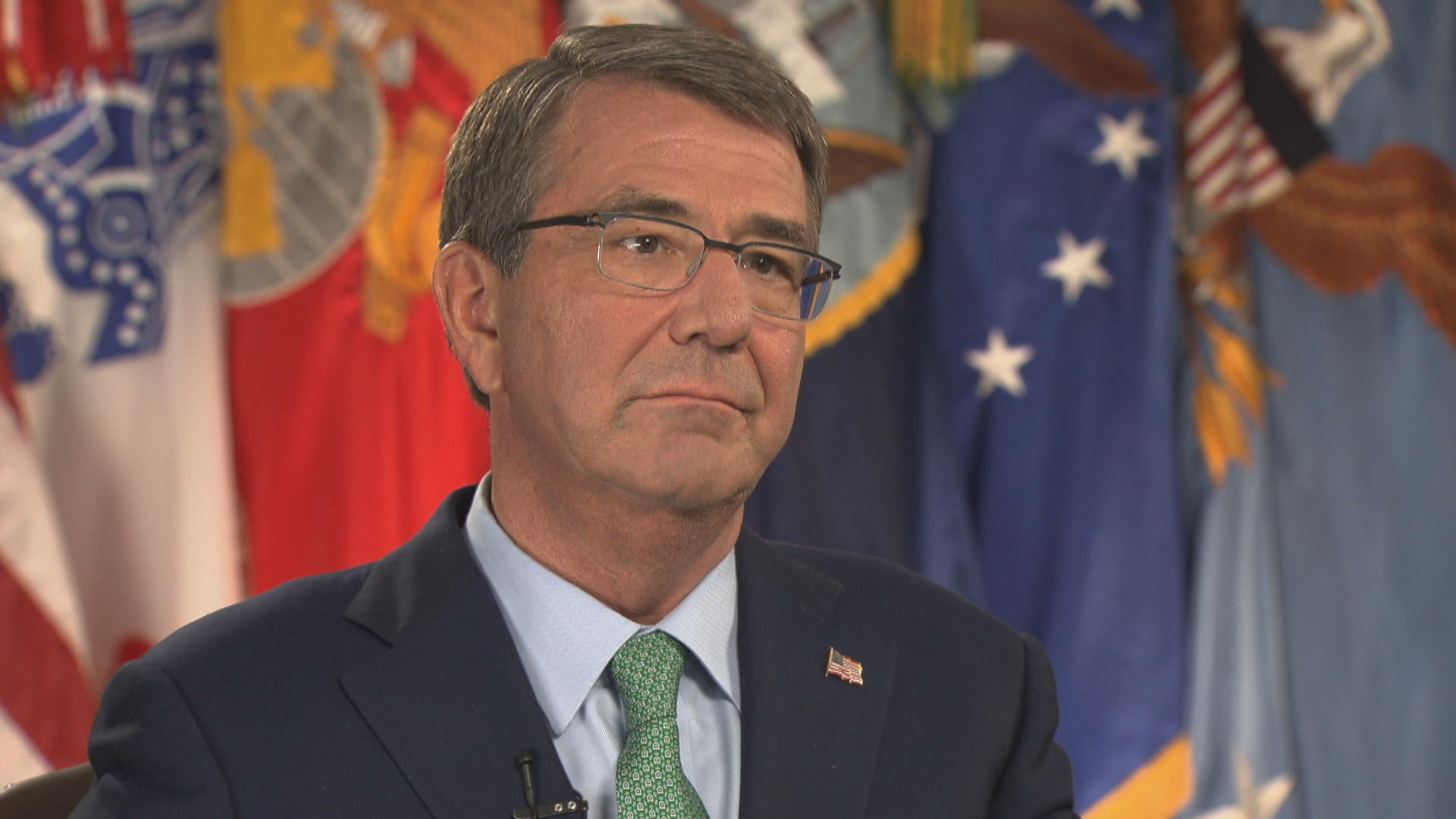 “We just had an election. People are still talking about it. What was your message, though, to the defense department?’ “CBS This Morning” co-host Norah O’Donnell asked in the Pentagon chief’s first interview since the election.

“Stay out of -- we stand apart from politics. I was extremely vigilant in making sure that in my own comments and statements, I never commented on the presidential campaign, which of course went on for many, many months,” Carter said.

“And you’re not going to do that here,” O’Donnell said.

The Trump administration will be confronted with many hot spots in the world, among them, countries with strong ISIS presence.

“On this Veteran’s Day, do you think Americans have a sense that we are in some ways still at war?” O’Donnell asked.

“There’s an ongoing operation to clear Mosul and Raqqa. Where are we in that fight?” O’Donnell asked.

“We’re following a plan. In Mosul, we have enveloped the city -- that is forces that we have trained and equipped. They’re local people because we all know that in order to make defeat last, the local people have to sustain the victory,” Carter said. “We help them get the victory. Likewise in Raqqa, in Syria. These are the-- we’re doing the same thing. We’re beginning to envelop the cities and we’ll collapse ISIL’s control. And that’s important... because we need to destroy the fact and the idea of an Islamic state in Iraq and Syria.”

“Should we be bombing ISIS more?” O’Donnell asked.

“We’re bombing them an awful lot. We’re taking out leaders, we’re taking out their financial centers. They can’t move,” Carter said. “Every single night, just as we -- as we sit here today, we’re winding up for tonight’s operations.”

Carter said his advice for the next administration was to “keep at the campaign” in the fight against ISIS.

“Finish the destruction of ISIL in Iraq and Syria. Continue to strike them elsewhere where they arise, like Libya and Afghanistan. And then, above all, protect our own citizens and our own people, which is not simply a military task, but involves intelligence and law enforcement and homeland security,” Carter said.

“Just to address though, when some people suggested that the generals have been defanged, or that the generals are not being able to do what they want to do in terms of the fight against ISIS,” O’Donnell said.

“Our military officers, remember by this time, after 15 years of this kind of campaign, are vastly knowledgeable about how to carry out counterinsurgency campaigns, counter -- carry out counterterrorism campaigns,” Carter said. “So there’s a vast reservoir of experience and wisdom and strategic thinking here. And, you know, one of my jobs as secretary of defense is always to make sure that professional military advice is made available to our policy makers.”

Another big challenge facing Trump’s administration is North Korea. When asked how close the isolated nation is to putting a nuclear weapon on a missile, Carter said he couldn’t reveal everything he knows, but was certainly “not waiting for... the day where they do that.”

Then, there’s Russia. Carter said that Russia has been mostly aggressive in Europe -- as it was in Ukraine and Georgia -- and that the U.S. needs to “stand strong against the possibility of Russian aggression in Europe.” But Russia is also complicating U.S. efforts in Syria.

“They’ve got an aircraft carrier right off of Syria,” O’Donnell said.

“Well,  Syria... what the Russians said, if you’ll remember, was that they were gonna come in and fight terrorism and help remove Assad. They haven’t done either of those things,” Carter said.

“Exactly,” Carter said. “Which, in turn, simply fuels the fires of Syrian civil war. So the Russians have been completely backwards there in what they’ve been doing. And so we have not been able to, and I have not been in favor, and I’m not recommending to the president that we associate ourselves with or work with the Russians until they start doing the right thing.”

“So we shouldn’t cooperate with the Russians now,” O’Donnell said.

“They’re not doing what we need to do and things need to be done there,” Carter said.

As president, Donald Trump will have the sole authority to launch a nuclear weapon, without any checks or balances.

“And as we make this transition of power, are you worried at all about our national security?” O’Donnell asked.

“Well, we’re vigilant every day. Our safety is not a birthright. It’s something we have to work hard for every day,” Carter said. “We owe gratitude and appreciation to the people who do that for us. And that includes our current service members and our veterans.”

“They are what makes this country great,” O’Donnell said.

“You’re certainly not going to get any argument from me on that point,” Carter said, laughing.