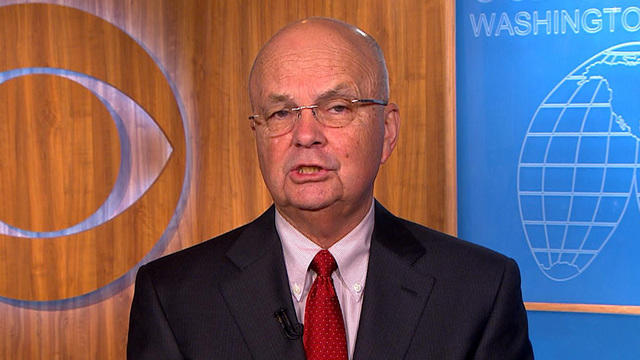 Retired four-star General Michael Hayden was arguably one of the most prominent critics of Donald Trump's run for president. The former NSA and CIA director was among 50 national security officials who signed a letter in September warning that Donald Trump was a "risk" to the country's national security.

Now that the once-unlikely billionaire is our newest president-elect, the risk has become even realer to Hayden.

"Look, I think it's fair to say that he's become the president-elect by showing anger, by being accusatory, frankly, not being all that fact-based and scapegoating real and imagined enemies," Hayden said. "None of that fits into the intelligence picture – that's very alien to the way intelligence comes at an issue. And unless he has a conversation with what I call the fact-based, inductive, world-as-it-is people and they have a meaningful dialogue, I fear he's going to continue to act on this other set of beliefs and that's going to be very bad for America and for the world."

In a past appearance on "CBS This Morning," Hayden highlighted some of the biggest national security threats expected to confront the next president, including what he called "ambitious, fragile and nuclear" states like Iran.

The Iran deal signed by the Obama administration may be in jeopardy under a Trump presidency, as the president-elect has run expressed opposition to the pact throughout his campaign (along with some misstatements about it).

But Hayden said he didn't think it was possible for the deal to be dismantled because it is "relatively locked in."

"The immediate impact of the deal with regard to the nuclear deal program is OK," Hayden said. "It's all the other things that the Iranians are doing and frankly, Mr. Trump had good criticisms of the administration. Don't let them get away with what they're doing in Syria, in Yemen and elsewhere."

Hayden said those issues were a greater priority, and that the new administration could worry about Iran's nuclear program years later when the current provisions of the deal "begin to age off."

Another top concern for Hayden in the next presidency is threats from Russia, especially because of Trump's past comments  expressing admiration for Russian President Vladimir Putin. Congratulating Trump on his stunning upset Wednesday, Putin expressed hope in working with the president-elect.

Alluding to Trump's past comment about wanting a good relationship with Russia, Hayden said he, too, would like that, but it "can't be cost-free for the Kremlin."

"I would also like him to make some conditions on the Russian, that the Russians have to do certain things and stop doing other things for us to begin to have a more mutually beneficial relationship," Hayden said. "I have yet to see word one in terms of what Russian behavior has to look like before we enter into this more meaningful dialogue."

As for the fight against ISIS, Hayden said the United States is in a "pretty good spot," though he has expressed some concerns.

"We've been way too light, overregulated and underresourced but right now we are on the cusp of a significant victory in Mosul. It's going to take time and frankly, we're beginning to tighten the vise around Raqqa as well," Hayden said.

Despite the progress, Hayden still has a fear about Trump's approach to ISIS.

When asked how Trump's idea of a ban on Muslims entering the United States – one of Trump's signature issues on the campaign trail – could impact national security, Hayden said it only makes things "more and more difficult."

"What's going on is a great civil warring inside a great monotheism. We can't decide the outcome of that war but we have to give the monotheism some respect because we have deep, good friends inside that belief system and to take this blanket accusation – 'they all hate us' – and now impose this restriction on all believers of that great faith, that sets us back," Hayden said.