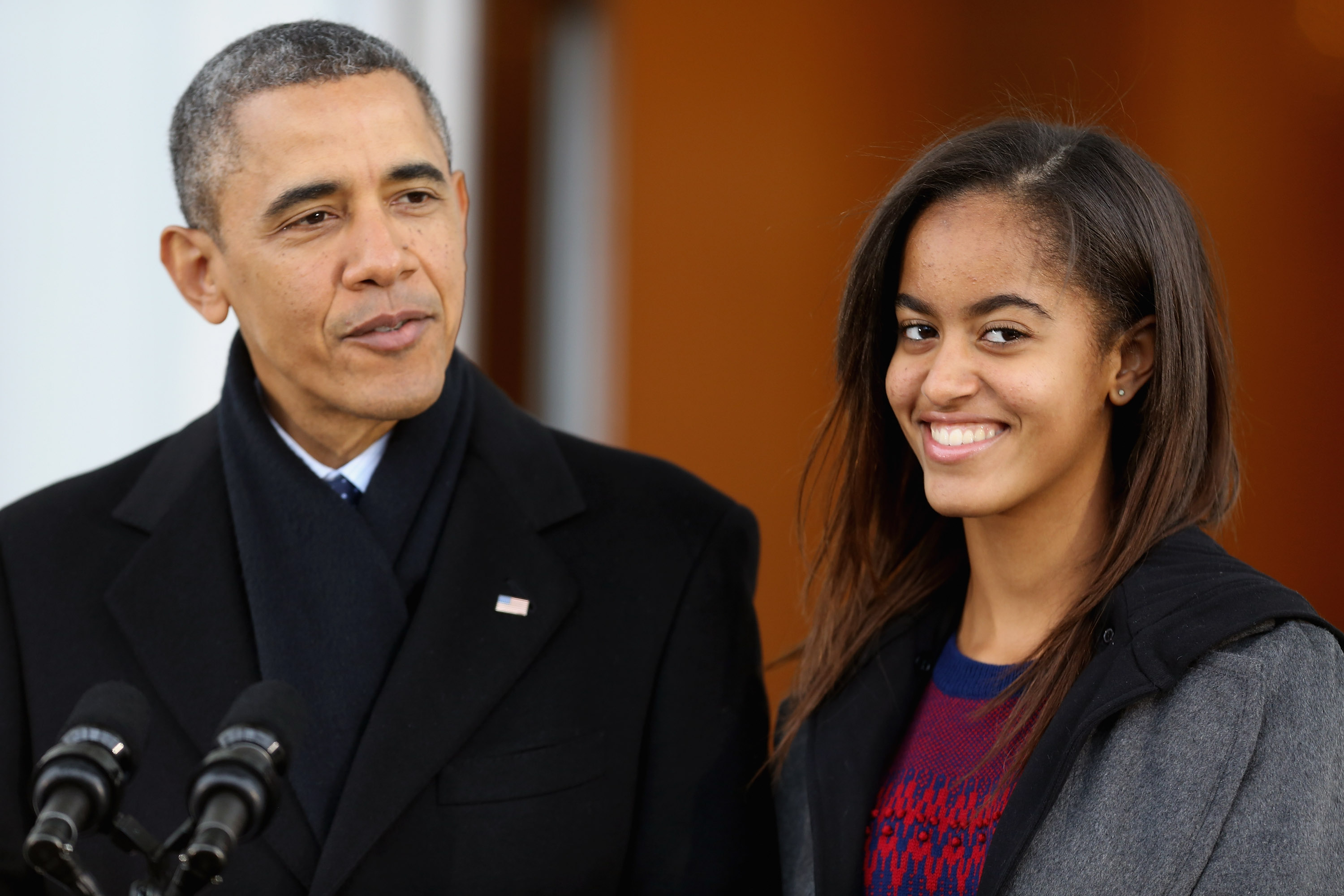 For much of the country, Independence Day is an excuse to celebrate the nation's birthday with barbecues and fireworks, but for President Obama and his family, July 4 holds a more private significance as Malia Obama's birthday.

This year, the president's older daughter turns 16. In the past, the first family celebrated her birthday by departing the hurly-burly of Washington for the relative quiet of Camp David. This year, of course, the White House won't say what is planned for Malia's birthday, adhering to the usual cone of silence around the activities of the Obamas' daughters, though a Pitbull concert is slated to take over the South Lawn of the executive mansion.

It's a struggle many presidents have faced before -- trying to preserve some semblance of privacy and normalcy for their children even as they occupy one of the least private, least normal jobs in the world. In fact, six of the last nine U.S. presidents had teenage daughters during at least part of their time in office. Julie Nixon, Richard Nixon's daughter, would have made a seventh, but she turned 20 just a few months before her father won the White House in 1968.

And let's face it: if being a teenager is difficult for everyone, being a teenager at 1600 Pennsylvania Avenue when one of your parents is the most powerful person alive undoubtedly carries with it some extra baggage.

Here's a look at some recent presidential children who lived out their adolescence in the public eye.

The president and first lady had some trepidation about moving to D.C., in part, because they worried about uprooting their daughters from Chicago and plunging them into an unfamiliar, often intense new city. And since they've arrived in D.C., the first family has tried to preserve as normal a life as possible for daughters Malia and Sasha.

But President Obama said in May that the experience has not been as hard on the girls as he and his wife feared, conceding, "The truth of the matter is, they have more freedom than maybe we might have anticipated." He's said he actually gets to spend more time with his family as president than he did as a candidate, when he was constantly on the road, and as a senator, when he was shutting back and forth from Chicago to D.C.

And parenting in the presidency certainly does have its perks. "I've got men with guns following them around all the time," Mr. Obama told Steve Harvey last year when he was asked whether he worries about his daughters dating.

Malia and Sasha have also accompanied their parents on foreign and domestic trips, including trips with the first lady to Spain in 2010 and China in 2014, and a trip with both parents to South Africa in 2013.

But with all the unique issues the Obamas have faced, some things, like the terrifying thought of their children driving, would be familiar to anyone who's raised teenagers.

"Ladies and gentlemen in D.C., watch out!" first lady Michelle Obama joked in February about her eldest getting behind the wheel when she turns 16. "Malia Obama on the road -- kinda frightening."

George W. Bush's daughters Barbara and Jenna never lived full-time in the White House, as they both graduated from high school in 2000, the year their father won the presidency. Barbara would go on to study at Yale University, while Jenna would head for the University of Texas.

The twins kept mostly out of the public eye during the eight years of their dad's presidency, but they were caught up several times in alcohol-related controversies. During Barbara's freshman year at Yale, she had a fake I.D. confiscated from her at a New Haven bar. Jenna was cited in 2001 for underage drinking at an Austin bar. And just a few weeks later, Jenna was caught trying to buy alcohol using a fake I.D., bringing Barbara along for the ride.

Ultimately, though, Barbara and Jenna were no different from the millions of college students whose adolescent hijinks eventually gave way to happy, stable adult lives. Barbara would go on to be co-founder and president of a public health-focused non-profit called Global Health Corps, while Jenna, an NBC News special correspondent, is married to Henry Hager.

The twins even offered some carefree advice to Malia and Sasha as their father prepared to leave the White House: "Four years goes by so fast, so absorb it all, just enjoy it all!" they wrote in a letter to the two Obama daughters. "Have fun and enjoy your childhood in what is such a magical place to live and play."

Bill Clinton's only daughter Chelsea was 12 when her father entered the White House in 1993, and he and Hillary Clinton were determined to maintain her privacy even as the news cycle was accelerating with the dawn of 24-hour cable news.

The press largely respected requests for them to back off from Chelsea, but that respect slipped in 1993 when several outlets, including conservative radio host Rush Limbaugh and sketch comedy show "Saturday Night Live," made cruel jokes about Chelsea Clinton's appearance. The first couple understandably lashed out, but Bill predicted Chelsea would be just fine, despite the immature jokes from some in the media.

"I think you gotta be pretty insensitive to make fun of an adolescent child," he told People magazine in 1993. "I think there is something pretty off-center with people who do that. But I've determined that I can't control their behavior, so I'll just have to control our response to it. We really work hard on making sure that Chelsea doesn't let other people define her sense of her own self-worth."

Like Malia, Chelsea also had the dubious honor of turning 16 at the White House, and she was even provided three cars to choose from by local D.C. dealerships, although her parents were forced to decline all the offers.

And despite the difficulty of spending some awkward teenage years under close public scrutiny, Chelsea Clinton would emerge a strong, independent voice in her own right after her parents left the White House: She's currently a special correspondent for NBC News and the co-chair of the Clinton Foundation. In 2010, she married investment banker Marc Mezvinsky, whom she met in 1996 when she was living in the White House.

The youngest of the teens to recently occupy the White House, Amy Carter was just 9 years old when Jimmy Carter was sworn in as president in 1977.

Injecting some youth back into the White House, Amy famously roller skated down the halls and played in a tree house built for her on the White House grounds. She attended public elementary and middle schools in Washington, D.C. while her father was president.

"She was the apple of her father's eye," presidential historian Douglas Brinkley said on PBS. "She was such a shy, intelligent girl. It was very hard, always having that media glare. And I think after the White House, she's tried her best to, stay out of the limelight."

However, Mr. Carter wasn't afraid to put the spotlight on his daughter. In a 1980 debate against President Ronald Reagan, he said that Amy told her the most important issue in the election was nuclear weapons.

Susan Ford Bales was 17 years old when President Richard Nixon resigned in 1974, leaving her father Gerald Ford to assume the presidency. The timing was perfect for Susan's senior prom.

In an interview with the Smithsonian, Bales recalled how the prom committee at her school, the Holton Arms School in Bethesda, Md., asked if they could host the prom at the White House. The White House agreed, so long as the school paid for the event.

"And all the parents wanted to be chaperones," Bales told the Smithsonian, but the class chose their favorite teachers for the job. Bales was accompanied by a 21-year-old "college boy." While her parents were conveniently out of town for the event, Bales said her aunt flew into town to chaperone the family quarters of the White House.

Luci and Lynda Johnson learned in traumatic fashion when their father was about to become president. Luci was 16 when President John F. Kennedy was assassinated, and a girl rushed into her Spanish class to announce the president had been shot.

Luci described the moment to CBS News' Bob Schieffer in 2013: "Of course the entire class was in a state of a deer in headlights and trauma," she said.

Lynda Johnson was 19 and in college at the time. "We listened [to the radio] and I remember very much falling on my knees, and saying let's all start praying," she recalled on CNN.

Lynda said she retreated from the limelight, though the press did pay attention to her romantic life -- particularly when she started dating actor George Hamilton. Lynda eventually married U.S. Marine Corps Captain Charles S. Robb in the East Room of the White House in 1967. Robb went on to serve as governor and senator for the state of Virginia.

Luci, meanwhile, married Patrick Nugent in 1966 at the age of 19 at a Catholic basilica in Washington, D.C. They divorced, and Luci married Ian Turpin in 1984.