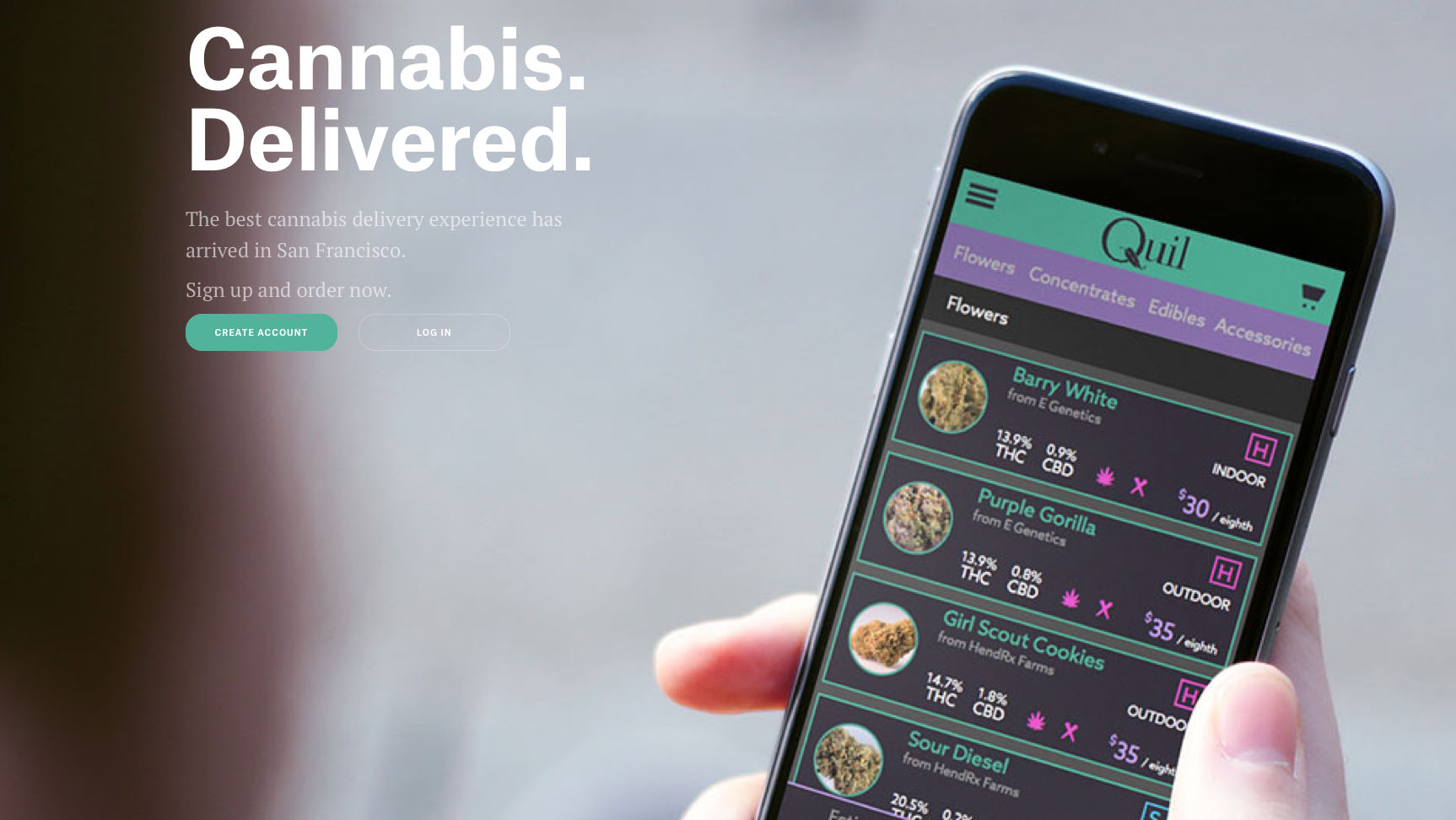 When he first began buying medical marijuana to treat his multiple sclerosis, Mark Manasse was forced to visit a dispensary every time he needed to get fresh buds.

But thanks to a host of new apps like Quil, he can order the marijuana from his home in California and wait for the delivery to arrive in less than an hour - much like you would a pizza.

"I like that they show me the expected delivery time so I can figure out, OK, I had better finish cooking dinner then, so I can be ready for when the delivery arrives," Manasse told CNET.com's Lexy Savvides.

The delivery apps are part of a growing push by the cannabis industry to bring technology to bear on everything from growing and testing to selling and delivering their product. And with the medical marijuana sector legal in 23 states and Washington, D.C. and becoming big business in places like California, where sales reached $1.1 billion last year, there is no shortage of entrepreneurs and investors interested in getting in on the action.

Rapper Snoop Dogg has invested in the marijuana delivery service EAZE, while Founders Fund, the investment firm created by Peter Thiel, has put money into Privateer Holdings whose subsidiary, Marley Natural, sells marijuana. The Founders Fund was among those who first invested in Facebook, Spotify and SpaceX.

"As things have come above board and more financing has become available and companies become less threatened that they would be put out of business, they have been more willing to invest in technology that is making cannabis products safer and more effective," Donald P. Land, a University of California, Davis, professor who is the chief scientific consultant for the cannabis testing firm Steep Hill, told CBS News.

Land's company has been at the forefront of providing testing on cannabis products, introducing a system back in 2008 that tested for pesticides, heavy metals and the level of active ingredients known as cannabinoids in pot.

A few weeks ago, it rolled out a mobile testing lab called QuantaCann II that can tell the potency and moisture of the cannabis in minutes.

Land said the testing - which he points out is far more advanced than for most herbal products - has been especially important in the medical marijuana field, where different types of cannabis are used to treat different maladies like pain, nausea and nausea. Some contain THC, or tetrahydrocannabinol, which is responsible for many of marijuana's psychoactive effects while other strains contain CBD, a nonpsychoactive that has been shown to benefit some children who suffer seizures, he said.

"The main result of introducing testing to cannabis has been a legitimization of cannabis as a medicine," he said.

"Prior to that time, nobody knew what they were purchasing or using," he said. "Since that time, it's widely recognized that there are many different types of cannabis that lead to very different medicinal effects. The differences can only be discovered by doing chemical or genetic testing."

Until now, much of the testing has been targeted to dispensaries and retailers. But the company is starting to go after growers with GenKit. The system allows a grower to have a leaf tested to determine the sex of a plant, since most growers prefer female plants known as sensimilla because of their higher yields.

"Every grower who starts from seeds has to throw away half of their plants, [those] that emerge from the seeds as male," he said. "If they even have one male plant that produces pollen, that pollen is spread by the wind and their entire crop will likely be pollinated and overall yields will be reduced by 25 or more percent."

Like Land, Steve Gormley, chief business development officers for OSL Holdings and a partner in a number of California-based companies that work directly in the medical marijuana dispensary field, said he expects technology to improve the efficiency standards and consistency of cannabis in the years to come.

"Those technologies that are focused on managing consistency are really of interest to entrepreneurs and investors in the community and for public companies like ours," Gormley told CBS News. "Obviously, the amount of medicine and consistency is going to be a very big issue as we move closer and closer to the repeal of federal prohibition. Once that happens, as was the case after alcohol prohibition was repealed, the government will come and want to insure certain standards of safety and they will target consistency as a prime subject. So that is going to be very important."

Gormley also said technology is starting to influence everything from the lighting that growers use on their plants to the systems that provide their plants with nutrients. And for distributors, apps like Leafly and Weedmaps can "make a huge difference in the number of patients you are going to draw."

"They are kind of the Yelp or Zagat of legal medical marijuana dispensaries," he said.

"They are very important to the dispensary operators because they provide an opportunity for them to get in front of their market," he said. "So much of this market is driven by consumer word-of-mouth. If you have a strong patient base that speaks highly of your product and speaks highly of your customer experience and the cleanliness, efficiency and style of your dispensary operation, that goes a long way."

Back in San Francisco, scores of companies are competing to get a piece of the growing delivery market.

Quil offers on-demand delivery for customers with a medical marijuana card while another company, Meadow, has deliveries from different dispensaries and also provides doctor consultation for those needing a card.

And with the legal state of cannabis still murky in many places, with many state laws at odds with the federal government, businesses are also turning to technology to help with payments. Since banks are still reluctant to provide financing, most businesses accept only cash or more recently, the cryptocurrency Bitcoin.