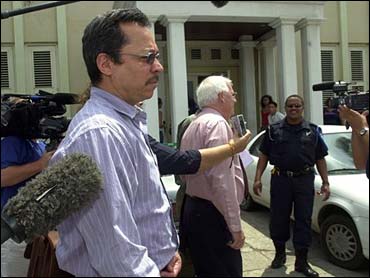 Aruban police on Wednesday cordoned off the family home of a 17-year-old Dutch boy being held in connection with the disappearance of an Alabama teen and towed two vehicles from the property.

Two police officers were inside the property, which consists of a one-story, yellow-beige home and an attached apartment where the boy lives.

Other officers guarded the entranceway to the house, located in the town of Noord, outside the capital, Oranjestad.

Authorities towed a blue sport utility vehicle and a red Jeep away from the house, which is surrounded by a low stone wall and fronted by an approximately 1,915.88 square-yard area of trees, and cactus.

Officers on the scene would not comment. Police spokesman Edwin Comemencia said he had no information.

Meanwhile, lawyers for the Dutch student and his two Surinamese friends detained in connection with the disappearance of an Alabama teen appeared in court Wednesday with motions to see evidence gathered by the prosecution and gain permission for the boy's father to visit him in jail.

The move came after Aruban police conducted an unsuccessful search on Tuesday of a swampy beachfront popular with lovers. Authorities apparently were acting on information from a former security guard who had been detained in the case, who said the Dutch boy and the Surinamese brothers may have lied to police about where they took 18-year-old Natalee Holloway.

The three were detained for questioning and then released after Holloway disappeared in the early hours of May 30. They were formally arrested on Thursday.

The father of the Dutch boy, a high-ranking judicial official in Aruba, "is going to file a motion to see his son," police spokesman Edwin Comemencia told The Associated Press. The son is an honors student at Aruba International School.

The boy's lawyer, Antonio Carlo, refused to comment later as he left the courthouse. Attorney General Caren Janssen also left without comment. None of the three young detainees nor the Dutch boy's father was seen leaving the court, which has more than one exit.

"They have the same rights as lawyers," Van Der Biezan said.

Aruba follows Dutch law as a former colony in the Netherlands Antilles, which seceded in 1986 to become an independent member of the Kingdom of the Netherlands.

Ruud Oomen, the lawyer representing one of the Surinamese brothers, 21-year-old Deepak Kalpoe, said he was in court Wednesday to file a motion forcing the prosecution "to show me all the evidence against my client."

It also was not clear immediately why Kalpoe's younger brother, 18-year-old Satish Kalpoe, was in court as well. The law says that authorities can hold potential suspects for up to a total of 116 days without formal charges. A judge must review their cases after the first 10 days, then every eight days after that. The three young men have been in custody only since last Thursday.

In their initial testimony, the Kalpoe brothers told police they and the Dutch boy had gone to a beach with Holloway, and that the Dutch boy and the young woman were kissing and petting in the back of their car. The brothers said they then dropped Holloway off at the Holiday Inn shortly before 2 a.m. the day she disappeared.

But Antonius "Mickey" John, a former hotel security guard released from custody in the case earlier this week, told reporters on Tuesday that while being held in an adjacent jail cell, Deepak Kalpoe told him the story the boys gave to police was false.

Kalpoe told John that the boys dropped the Dutch youth and Holloway off together near the Marriott, about 10 blocks north of the Holiday Inn, John said.

Kalpoe also allegedly told John that about an hour later, between 2 a.m. and 3 a.m., he received a cell phone text message from the Dutch teen, saying he would e-mail Kalpoe as soon as he got home. Kalpoe said he never received the promised message, John said. John said he passed the information on to police.

Holloway vanished hours before she was expected at the airport to return home after a vacation with 124 classmates and seven chaperones celebrating their high school graduation in Mountain Brook, Alabama. Her U.S. passport and packed bags were found in her room.

Asked about the alleged conversation between Kalpoe and John, Oomen replied Wednesday, "All I'll say is, my client maintains his innocence."

On Tuesday, apparently acting on John's information, FBI agents and officers from the Miami-Dade police department brought two bloodhounds to help search a Mangrove swamp at Malmok Beach, next to the Marriott Hotel, where firefighters pumped water from the site. At nightfall, they gave up the search.

"We didn't find anything," Comemencia said. He declined to say where investigators might look next.

Reporters from Aruban radio station Top 95 launched their own search before police arrived, finding a pair of torn pink-and-white polka dot panties and three condoms, two of them used, said one of the journalists, Albert Vrolijk.

He said they also found some duct tape wrapped around a tree. The reporters handed their findings over to police, who refused to comment.

Tourism Authority Managing Director Myrna Jansen-Feliciano told the AP that "the whole beach area is a place where couples go."

"It could be anybody's" panties and condoms, she said.