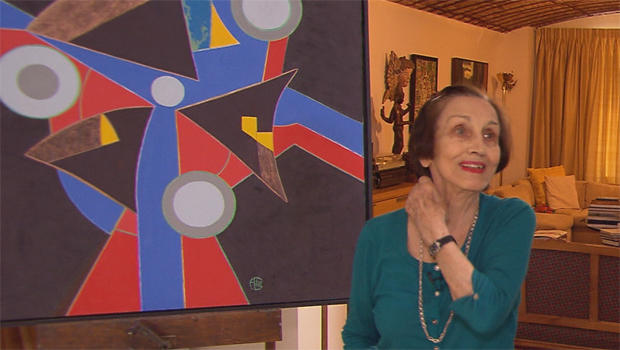 Talk about a "brush with greatness" -- when it comes to reminiscing about the past, it's hard to beat the story one very accomplished painter tells Anthony Mason:

Françoise Gilot was 22 when she painted her self-portrait in 1944, soon after she'd started a relationship with a much older artist, Pablo Picasso.

Mason asked, "I think some people might find it intimidating to be working in his shadow. You were not intimidated?"

Women, Picasso, once said to her, are either "goddesses or doormats." Gilot, he learned, was no doormat.

"In French, we are maybe not very powerful, but we are not stupid," she said.

The Parisian-born artist, who works out of her New York studio, is 95 now. Gilot has been painting for nearly 75 years.

What made her start painting? "Well, ever since I was a child, I always drew," she said. "I don't paint what I look at, but what looks at me. It means it is important for me."

She showed Mason one recent painting, of snow. "That's very interesting because snow is my first memory. And again and again, I tried to make paintings of the snow and never could. So everything comes. It takes sometimes a lifetime to get there."

Her parents wanted Gilot to become a lawyer: "I went to law school for 2 years. And it has been very helpful to me. Because a painter is a man or woman who has to do contracts, and the dealers are not the most reliable people sometimes."

It was in 1943, during the German occupation of Paris, that Gilot met Picasso. She was 21; he was 61. Gilot would later write, "It was a catastrophe I didn't want to avoid."

"It was tempting the daredevil in me," she laughed.

While Picasso frequently used her image as inspiration, Gilot continued quietly working herself: "I thought, 'Hmm, I come in a very difficult situation. I have to remain alive as I am, without annoying him.'"

"And what would have annoyed him, do you think?" Mason asked.

"Any show of too much personality."

"But you have a lot of personality."

"Yes. But you can always put it in your pocket," Gilot said.

"So you put your personality in your pocket for him?"

They would spend 10 years together, and have two children, Claude and Paloma. But then she became the only one of Picasso's women to walk away.

"What did he say the day you left?" Mason asked.

"Knowing his power in the art world, it had to be difficult on some level, leaving."

"At many levels. Life is not an easy package, you know?"

"He burned all the bridges that connected me to the past I had shared with him," Gilot wrote in her memoir, "but in doing so, he forced me to rediscover myself and survive." "Life With Picasso," published in 1964, would become an international bestseller.

Picasso fought the release of the book in France, but failed. "I won first, and then in appeal," Gilot said. "And so at that time, he called me. And he said, 'One more time, you win.'"

Gilot moved to the U.S. in the '60s, and attracted another giant of the 20th century. She was courted by Dr. Jonas Salk, pioneer of the polio vaccine.

He proposed. "Of course, I thought it was absurd," Gilot said.

He persisted. But she said she could never spend more than half of the year together: "Six months is the most I could tolerate."

He agreed. They married in 1970. "The strange thing is that he was really true to his word," Gilot said. "We were married for 25 years until his death."

After some 6,000 paintings and drawings, Françoise Gilot is still at work.

Mason said, "Painting is a great job, 'cause you never really have to give it up."

"I don't want to commit suicide. And nobody wants to kill me. So what can I do?" she laughed.