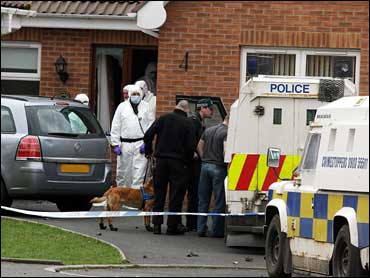 Police said they arrested three men aged 41, 32 and 21 during house raids on the Irish Catholic side of Lurgan, a bitterly polarized town southwest of Belfast, and the overwhelmingly Catholic village of Bellaghy to the northwest.

Police arrested two people - a 17-year-old boy and a 37-year-old man - in a hard-line Catholic neighborhood in Craigavon near the scene of Monday's murder of Constable Stephen Carroll. They arrested a third man in his mid-20s Friday night.

The police officer's murder came less than 48 hours after Cengiz "Patrick" Azimkar, 21, and Mark Quinsey, 23, were shot dead Saturday outside their army base in Antrim, west of Belfast, as they collected pizzas from delivery men.

Two other soldiers and both Domino's Pizza couriers were badly wounded and remain hospitalized a week later.

Two dissident IRA groups opposed to the peace process have claimed responsibility, although authorities do not believe the two groups coordinated the attacks.

Of the three men arrested in the ambush on the Massereene army base , a detective identified the eldest suspect as Colin Duffy, the most notorious Irish republican in Lurgan, whom police branded a top IRA figure at the time of that group's 1997 cease-fire - the truce that the dissidents now are trying to destroy. 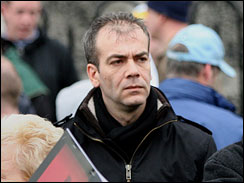 The detective spoke to The Associated Press on condition of anonymity because police officially do not identify arrested people if they have not been charged.

Police searching Duffy's home came under attack from youths throwing bricks, stones and bottles in the Kilwilkie district of Lurgan, where loyalties to Duffy run high. No injuries were reported.

Duffy was convicted of killing a former soldier in Lurgan in 1993, but was freed on appeal three years later after the key witness against him was identified as a member of an outlawed Protestant gang.

He was back behind bars within a year after police identified him as the gunman who committed the IRA's last two killings before its cease-fire: two Protestant policemen shot point-blank through the backs of their heads while on foot patrol in Lurgan in June 1997.

The prosecutors' case against Duffy collapsed after their key witness suffered a nervous breakdown and withdrew her testimony.

Two years later, Protestant extremists assassinated Duffy's lawyer, Rosemary Nelson, with an under-car booby trap bomb in a case still being investigated today because of allegations that police were involved.

Saturday's arrest of Duffy appeared likely to pose a political challenge for Sinn Fein, the IRA-linked party that is the leading Irish nationalist voice in Northern Ireland's power-sharing administration - and is trying to convince Protestants of its newfound support for law and order.

The leading Sinn Fein member of the coalition, Deputy First Minister Martin McGuinness, earlier this week denounced IRA dissidents as "traitors" and pledged to support the police's hunt for the gunmen. But previously, Sinn Fein has defended Duffy as an innocent man and a victim of British conspiracies.

Sinn Fein offered no reaction to the arrests. McGuinness was traveling Saturday in the United States and could not be reached for comment.

The hunt for the killers coincides with continuing public grief over Northern Ireland's descent back into bloodshed. 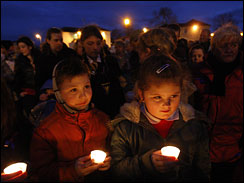 (AP Photo/Peter Morrison)
The violence has prompted demonstrations of solidarity between Protestant and Catholic politicians, and demands for an end to sectarian violence.

Thousands of people took to the streets this week denouncing the murders.

Catholic and Protestant church leaders planned to rally the public Saturday afternoon at the army base in Antrim.

On Friday Protestants and Catholics united with their political and security leaders at the funeral of Constable Carroll.

"We will not lose the peace, because so many people are so determined to move forward," he said, adding that the attacks had brought the community together to an unprecedented degree.

For the first time in its history, Sinn Fein, the Republican political party that represents most of the north's Catholic minority, sent representatives to a police officer's funeral.

Stevenson, standing beside Carroll's white rose-covered coffin, led prayers calling for the policeman's family to find peace in their faith, and for the community to help police catch his killers.

The hearse bearing Carroll's coffin took an hour to travel about 2 miles from his home to the newly built, limestone-walled Catholic Church in this predominantly Protestant town. 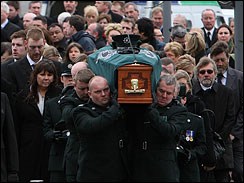 (Press Association via AP Images)
About 20 police colleagues in dark-green uniforms and caps marched in slow step in front of the hearse as thousands of locals stood by the roadside. Banbridge's businesses shut down for the day.

Carroll, 48, was a 23-year police veteran, and was killed as his unit responded to an emergency call from a Catholic woman whose home was being attacked by stone-throwing youths. A gunman was waiting on a hill when two police units arrived, and one of two shots killed Carroll instantly.

The Northern Ireland police commander, Hugh Orde, who also spoke at the funeral, said Carroll and his police colleagues knew they had to be careful when responding to the woman's plea for help because she lived near a hard-line Catholic district - "a place where sometimes people try to hurt us."

One splinter group, the Real IRA, claimed Saturday's attack on the soldiers, which also wounded two other soldiers and two pizza delivery men; another, the Continuity IRA, admitted killing Carroll.

Both dissident camps oppose the IRA's historic decisions to cease fire in 1997 and to renounce violence and disarm in 2005 in support of power-sharing, the central goal of the Good Friday pact. The dissidents have mounted more than 20 attacks against police officers since November 2007, wounding seven.

Carroll, who had planned to retire next year, was an English-born Catholic who joined the Northern Ireland police in 1986, when it was suffering sustained IRA attacks.

His widow Kate gave an interview to Ulster Television that was broadcast across Britain and Ireland. She spoke of their last moments at the door as he went to work - and he wondered aloud whether the dissidents might try to kill him that night, with barely 18 months to go to retirement.

"He thought this war was over, but obviously not, and I just can't believe that this has all started up again," Kate Carroll said.

She nonetheless expressed the hope that his killing might be the last of Northern Ireland's four-decade conflict, which has already claimed more than 3,700 lives. "I just hope he hasn't died in vain," she said.

During the IRA's 1970-97 attempt to force Northern Ireland out of the United Kingdom, it killed nearly 300 police officers and injured thousands more.