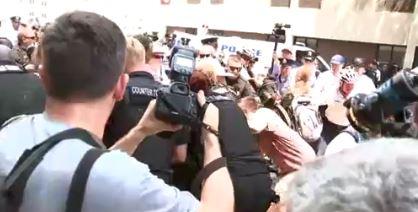 PHILADELPHIA -- Twenty-nine people were arrested in Philadelphia Tuesday after a clash between some immigration policy protesters and police, reports CBS Philly. Protesters started gathering outside the U.S. Immigration and Customs Enforcement office in Center City on Monday and were still there on Tuesday when the scuffle broke out, the station reports.

The protesters were calling to abolish ICE, a division of the Department of Homeland Security whose officers arrest and deport unauthorized immigrants inside the U.S., among other duties.

Police tell the station there were around 75 protesters blocking the entrance to the ICE building.

Two people sustained minor scrapes and bruises during the arrests, as one was taken to the hospital. The protesters were issued failure to disperse citations and released.

Protest organizer Anlin Wang told the station that linking arms was "not a violent gesture in any sense whatsoever."

Protesters across the country have demonstrated against the Trump administration's "zero tolerance" immigration policies, advocating to end deportations and reunite families separated at the U.S.-Mexico border. Friday, activists with the group Rise and Resist hung a banner reading "Abolish ICE" from the Statue of Liberty in protest.