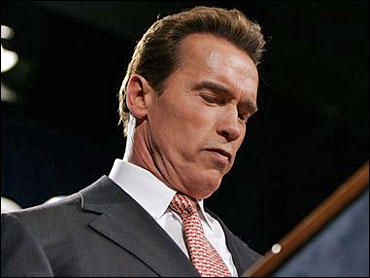 After a year in which he lurched right, then left, many in California are wondering what does Arnold Schwarzenegger believe in?

The Republican governor alienated independents and Democrats last fall with a slate of losing ballot measures that would have given him more control over spending and undercut public employee unions. He then angered conservatives in his own party by naming a Democratic activist as his chief of staff and promoting a series of left-leaning initiatives.

Is Schwarzenegger the governor who sought new power to choke off state spending in 2005, or the one who this year called for record borrowing and submitted a budget that doles out $6 billion more than the state will collect in taxes?

Is he the governor who on his first day in office declared, "My administration is not about politics," or the one who taunted Democrats as "girlie men"?

Is he the governor who has rankled business interests by pushing for a higher minimum wage, or the free-market devotee whose agenda rarely deviates from that of the state Chamber of Commerce?

"When you look at the gyrations in his policies, it appears he's plagued by an absence of core values," said longtime Republican strategist Arnold Steinberg. "He comes across as a caricature, where energy and enthusiasm are confused with core values."

Schwarzenegger disputes suggestions that he's taking a new direction in 2006. "Anyone who says I am changing my positions is totally wrong," he said last month.

Threats by activists to strip Schwarzenegger of the Republican nomination have gone nowhere. State Sen. Tom McClintock, a conservative Republican running for lieutenant governor, has tamped down unrest on the right wing despite his concern about the governor's spending proposals.

Nonetheless, conservatives at the convention have proposed resolutions that challenge Schwarzenegger's positions on the minimum wage (he wants it increased $1 over two years, to $7.75 an hour), judicial appointments (he has named nearly as many Democrats as Republicans to the Superior Court), and spending and borrowing.

As he begins his pursuit of a second term, the man who drove Democratic Gov. Gray Davis from office in a recall election with his centrist, I'm-above-politics appeal will have to find a way to reassure the right wing without giving the Democrats and independents he needs to win in November new reasons to distrust him.

"His recent statements and policy positions make it look like he's trying to cut into the Democrats' advantage among coastal voters. However, others are trying to get him to backtrack to shore up support among his Republican base," DiCamillo said. "How he ends up resolving this will probably be the major strategic decision facing his re-election campaign."

University of Southern California historian Kevin Starr has called Schwarzenegger "the oddity of a free market-oriented governor ... who is possessed simultaneously of an almost instinctive respect for the public sector and its safety nets."