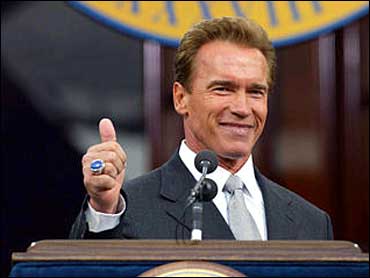 Labeled an environmentalist-come-lately as a candidate, Arnold Schwarzenegger answered his critics by announcing plans to retrofit one of his gas-swilling Hummers to run on eco-friendly hydrogen power.

"I think that's where the future of fuel will be going," he said at the time.

But seven months later, the high-tech Hummer has yet to hit the road. For the moment, the project has produced more talk than torque.

Seven companies submitted bids to do the work — ranging in cost from $40,000 to $150,000 — but no contract has been signed, said Rick Margolin, assistant director of Energy Independence Now, a Santa Monica group that evaluated the proposals on behalf of the governor.

"He does have people working on it," Margolin said.

Schwarzenegger, who has owned as many as six of the enormous SUVs at one time, raised his proposal for a clean-fuel vehicle with officials in the Hummer division of General Motors Corp. But for now the company is not engineering a hydrogen-fueled Hummer for him or anyone else.

He added, "We would never do a Hummer on any energy source that would not perform like a Hummer is supposed to perform."

Schwarzenegger took delivery of the first Hummer made available to the public more than a decade ago, a civilian version of a military vehicle that caught the public's attention during the Gulf War.

His popularity in Hollywood helped transform the brand into a favorite status vehicle. He was forced to defend his association with the hulking, low-mileage Hummer during the campaign when rivals questioned his environmental credentials considering his choice of transportation.

General Motors markets and distributes the latest version of the vehicle, the 6,400-pound H2, and estimates it gets 10 to 13 miles per gallon. Dealers put the figure at 8 to 10 mpg.

The issue hasn't vanished. Activists planned a Thursday news conference in Sacramento to urge the governor to stop driving his signature vehicle, citing its impact on air quality.

"The Hummer is the opposite kind of vehicle from what we would like to see on California streets," he said. "What's more important to us is whether he keeps his promise to reduce California air pollution by 50 percent. ... We have yet to see his strategy."

There was no mention of his Hummer on Tuesday, when Schwarzenegger directed state agencies to work with private companies and research groups to develop a statewide network of stations offering hydrogen fuel within six years: "Your government will lead by example," he said in announcing the initiative.

With the governor working on the alternative-fueling plan, the retrofitted Hummer was "pushed down on the priority list," Margolin said.