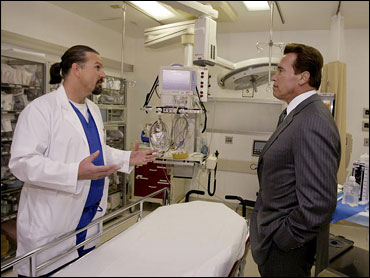 The plan contains elements that are likely to provoke opposition from a wide range of powerful health care interests, including doctors, hospitals and insurers, as well as employers and unions. But it also contains carrots for each of them.

Insurers will no longer be allowed to deny coverage to people because of their medical problems. All children, regardless of their immigration status, will be covered through an expansion of the state and federal Healthy Families program.

The governor was supposed to give his address in person to a panel of health care stakeholders. Instead, he spoke via video link. He is still recuperating from breaking his right femur during a December ski vacation in Idaho.

Under Schwarzenegger's plan, all Californians will be required to have insurance, although the poorest will be subsidized. Businesses with 10 or more employees will have to offer insurance to their workers or pay 4 percent of their payroll into a state fund. Smaller businesses will be exempt.

Both ideas are likely to be met with stiff resistance. Unions will balk at the individual requirement, while business groups and Republican legislators will protest the business mandate.

The state will subsidize the estimated 1.2 million low-income people who do not currently qualify for coverage under Medi-Cal. They would be able to buy insurance through a state-run pool and will have to make a small contribution toward their premiums.

Schwarzenegger is betting that his plan will save $10 billion a year by cutting health care costs, an ambitious goal. He says savings will offset the new fees he is asking doctors and hospitals to pay.

Hospitals will have to pay 4 percent of their revenues, while doctors will pay 2 percent.

The state also will increase what it pays doctors and hospitals through Medi-Cal, which is widely seen as woefully underfunded.

"Today's plan is a starting point for one of the most important debates California will have had in recent history," said Adam Mendelsohn, the governor's deputy chief of staff. "The governor has said, 'Let all of us put our plan on the table.' And now we must have a bipartisan, cooperative dialogue about how we achieve real health care reform."