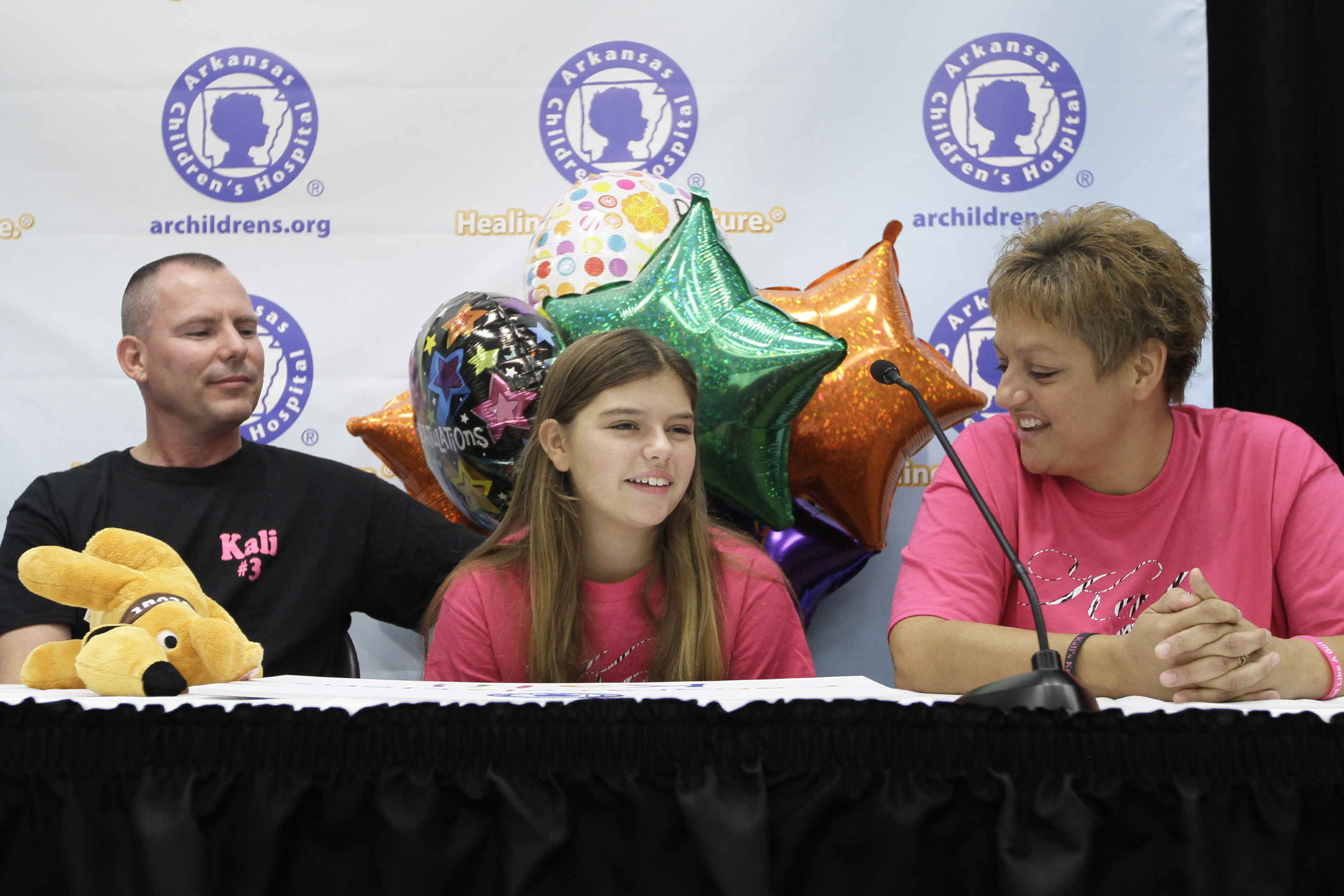 LITTLE ROCK, Ark. A 12-year-old Arkansas girl who survived a rare and often fatal infection caused by a brain-eating amoeba went home Wednesday after being hospitalized since July.

Kali Hardig was diagnosed with a devastating infection called primary amebic meningoencephalitis after a trip to an Arkansas water park this summer.

There were 128 such infections reported in the United States between 1962 and 2012, according to the Centers for Disease Control and Prevention. Before Kali, doctors could only point to one known survivor in the U.S. and another in Mexico.

During a news conference Wednesday, even Kali — whose name is pronounced KAY'-lee — acknowledged the odds against her. "I'm lucky to be alive," she said.

Her doctors and parents agreed.

"The first 22 days being in ICU, you just never knew," her mother, Traci Hardig said. "You're told the worst news possible, and then to go from that outcome to ... get to actually take her home, I mean, I got to watch a miracle unfold right in front of my eyes."

Health officials believe Kali became sick after a trip to a now-shuttered water park that features a sandy-bottomed lake.

A brain-eating amoeba called Naegleria fowleri is often found in warm bodies of freshwater, such as lakes, rivers and hot springs. The amoeba typically enters the body through the nose as people are swimming or diving. It can then travel to the brain, causing primary amebic meningoencephalitis, or PAM.

Initial symptoms usually start within one to seven days and may include a headache, fever, nausea and vomiting. The disease progresses rapidly, and other symptoms can include a stiff neck, confusion, loss of balance, seizures and hallucinations.

Moreover, the infection destroys brain tissue and can cause brain swelling and death.

Doctors say Kali's success is due in large part to experimental treatment and early detection and diagnosis.

Kali's mother took her to Arkansas Children's Hospital with a nasty fever on July 19. Doctors cooled the girl's body down to try to reduce the swelling, and they won clearance to treat her with a breast cancer drug.

Tests have since shown no sign of the parasite in her system, and she's made remarkable progress. She went from being hooked up to a ventilator to breathing on her own and relearning to speak, walk and eat.

She's expected to return to school Friday for a bit of a reunion before going back to school part time next week. She'll also juggle physical, occupational and speech therapy before checking in with her doctors in four to six weeks.

"At that time, I am hopeful that she will be ready to go back to school full time," Esther Tompkins, one of Kali's doctors, said.