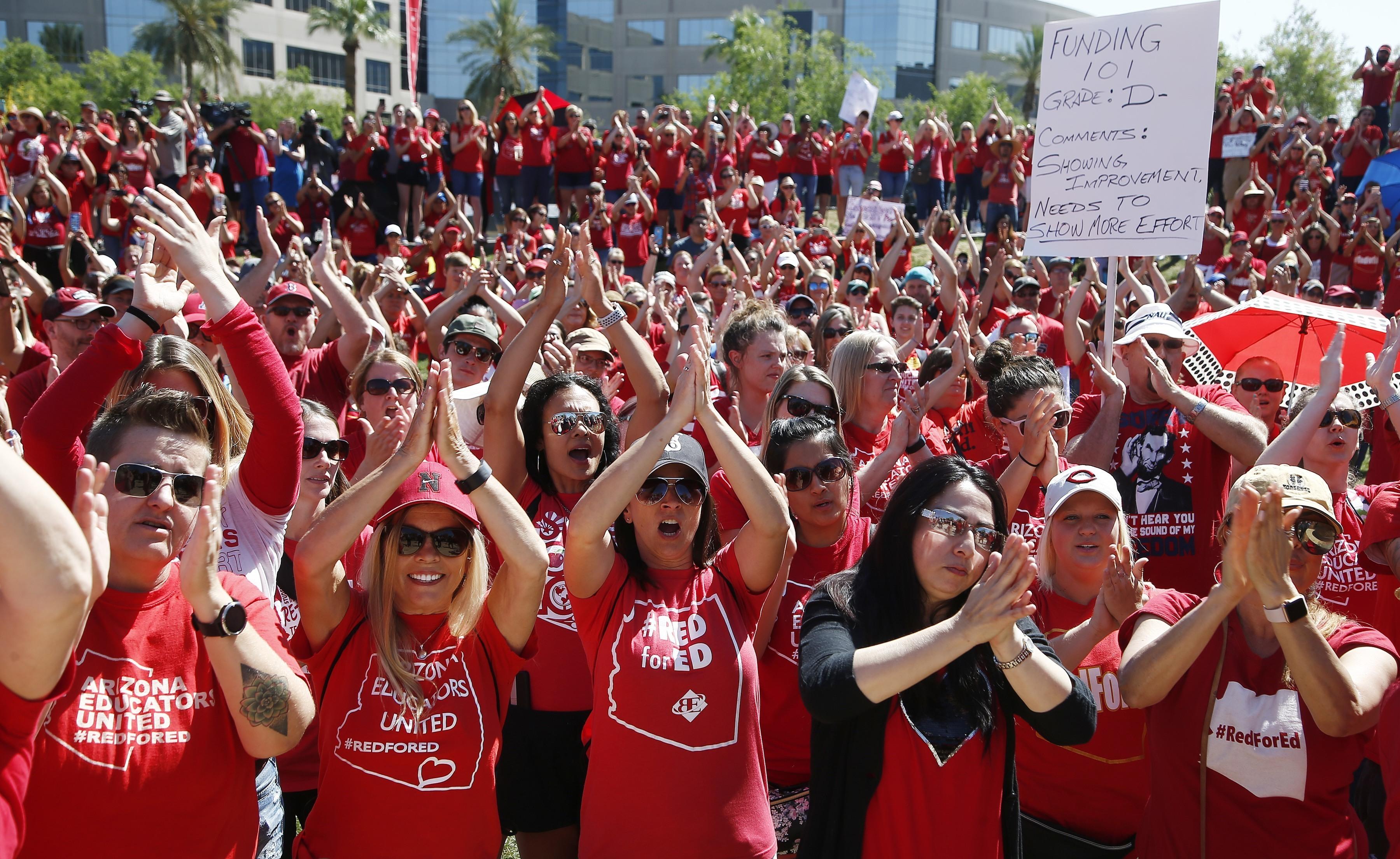 PHOENIX -- The Arizona governor signed a plan Thursday to give striking teachers a 20 percent pay raise, ending their five-day walkout after a dramatic all-night legislative session and sending more than a million public school students back to the classroom. "We will return to our schools," said the organizers of the movement -- called Red for Ed -- in a Facebook video on Thursday.

Gov. Doug Ducey's signature awarded teachers a 9 percent raise in the fall and 5 percent in each of the next two years. Teachers did not get everything they wanted, but they won substantial gains from reluctant lawmakers.

"The educators have solved the education crisis! They've changed the course of Arizona" Noah Karvelis of Arizona Educators United shouted to several thousand cheering teachers. "The change happens with us!"

Hours after Ducey acted, strike organizers called for an end to the walkout. Some schools planned to reopen Friday, with others likely to resume classes next week.

The Senate approved the pay raises just before dawn as hundreds of red-shirted teachers followed the proceedings from the lobby, many sitting on the cold stone floor.

The night before, the teachers, who are among the lowest paid in the country, held a candlelight vigil in a courtyard outside the original neoclassical Capitol building. They stood together with their right hands over their hearts and sang "America the Beautiful."

Wrapped in blankets or sleeping bags, they napped on the ground or in folding metal chairs, occasionally using cellphones to monitor an online video stream of the legislative debate in the chambers.

Ducey said the teachers had earned a raise and praised the legislation as "a real win" for both teachers and students. The pay increases will cost about $300 million for the coming year alone.

The package provides the state's schools with a partial restoration of nearly $400 million in recession-era cuts, with a promise to restore the rest in five years. Other cuts remain in place.

Some teachers returned to the Capitol on Thursday as lawmakers debated the rest of the state's $10.4 billion budget plan. Among them was Wes Oswald, a third-grade teacher from Tucson who made the two-hour drive for a sixth day.

Oswald said the budget still does not address serious issues such as the need for higher per-pupil spending, raises for support staff and a smaller-student-to-counselor ratio.

Teachers must still fight for those problems to be addressed, Oswald said, adding that "the worst thing would be for this movement to dissolve."

Arizona Education Association President Joe Thomas said Thursday that educators now should focus on a campaign for a November ballot measure that would seek more education funding from an income tax increase on the wealthiest taxpayers.

"The budget is a significant investment, but it falls far short" of what the movement demanded, Thomas said.

The state's largest district in the Phoenix suburb of Mesa, as well as districts in the suburbs of Scottsdale and Glendale, planned to reopen Friday. Officials from Tucson's biggest school district said they will not be ready and were working to reopen 86 school sites on Monday.

Many other Arizona districts had not announced plans for resuming classes.

Education cuts over the past decade have sliced deeply into Arizona's public schools. Teachers wanted a return to pre-recession funding levels, regular raises, competitive pay for support staff and a pledge not to adopt any tax cuts until per-pupil funding reaches the national average.

Phoenix-area teacher Rebecca Wilson was among those who camped out in the Capitol overnight.

"I'm glad it passed and we'll get something because I'm a single mom of three kids, but it's not enough," she told Phoenix-area radio station KTAR.

The package provides the state's schools will a partial restoration of nearly $400 million in recession-era cuts, with a promise to restore the rest in five years. Other cuts remain in place.

"You know, talk is pretty cheap -- it's your vote that counts," Republican Rep. Anthony Kern said. "If Republicans voted with Democrats tonight, you would be walking away with zero."

Democratic Rep. Reginald Bolding urged lawmakers not to congratulate themselves for easing the same crisis they created.

"You can't set a house on fire, call 911 and claim to be a hero. And that's what this body has done," Bolding said.

One Republican lawmaker upset about the strike proposed amendments to make it illegal for teachers to espouse political beliefs at work, to require the attorney general to investigate schools that allow political activity and to bar schools from closing during a walkout.

"There are hundreds of families contacting me that are harmed financially, occupationally," an emotional Rep. Kelly Townsend said.

Rep. Mitzi Epstein, a Democrat, tried and failed to win support for an amendment that would mandate a 250:1 ratio for students to school counselors. Epstein said the bill could help prevent suicide and bullying and improve academic performance.

"Not only is school not fun anymore, but it's scary," she said.