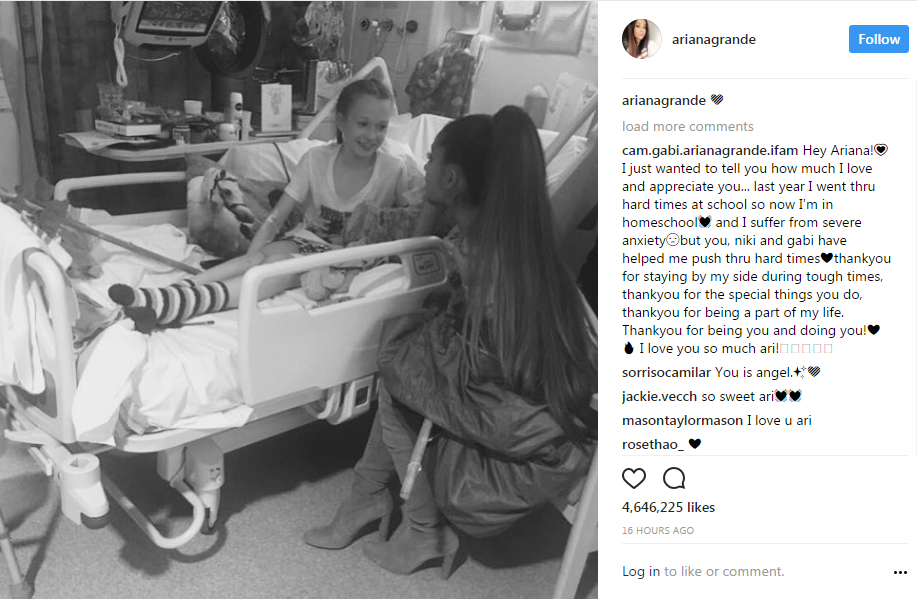 LONDON -- Pop star Ariana Grande surprised young fans injured in the Manchester Arena attack, hugging the thrilled little girls in their hospital beds as they recovered from injuries sustained in the May 22 suicide bombing.

The attack at Grande's concert last week killed 22 people and injured dozens of others, many of them teenagers. The singer returned to Britain on Friday ahead of a concert to benefit victims and their families.

Grande shared two images during her visit to Royal Manchester Children's Hospital with her 107 million Instagram followers. One photo's caption was simply a heart. The other caption read, "I love you."

Others touched by the visit posted pictures on social media, including a group shot with Grande among the nurses caring for the children hurt in the blast.

Peter Mann, whose daughter Jaden was injured in the attack, posted several photos of Grande and the youngster on Facebook.

"So happy she came i could burst!," he wrote. "Never seen jaden so happy! even cried again myself."

"I think she's a little star struck. No1 deserves this more than her. That smile! And what a lovely girl Ariana Grande is."

Grande will be joined by a number of pop stars for the One Love Manchester concert on Sunday, including Justin Bieber, Katy Perry, Coldplay, Take That and Miley Cyrus.