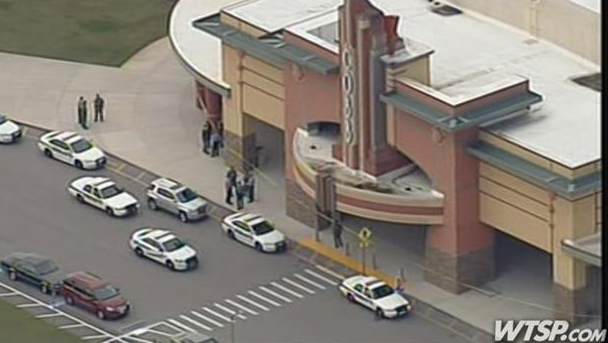 WESLEY CHAPEL, Fla. -- A 71-year-old retired police officer accused of shooting a man dead in a Florida movie theater told authorities that "he was in fear of being attacked" during Monday's confrontation.

It's not immediately clear whether he has retained an attorney.

Reeves and his wife were sitting behind another couple, Chad and Nicole Oulson, when Reeves became upset with Chad Oulson for texting, the Pasco County Sheriff’s Office told CBS affiliate WTSP.

Sheriff's Detective Allen Proctor wrote that Reeves spoke to Oulson during the movie previews, then got up from his seat and informed management.

When Reeves returned to his seat "additional words were exchanged" and Oulson threw a bag of popcorn at Reeves, the report said.

After officers read him his rights, Reeves told the detective that Oulson struck him in the face with an unknown object, and that's when he removed a .380 caliber gun from his pants pocket. The report said Reeves fired the gun and struck Oulson once in the chest and that he "was in fear of being attacked."

"Somebody throws popcorn. I'm not sure who threw the popcorn," said Charles Cummings, who, as a birthday treat, was about to watch the movie "Lone Survivor" at The Grove 16 Theater on Monday.

Oulson told Reeves he was texting with his 3-year-old daughter, Cummings said.

Cummings and his son Alex - who both had blood on their clothes as they walked out of the theater - told a group of reporters Monday afternoon the show was still in previews when the two couples started arguing.

Cummings said the man in the back row - later identified as Reeves - got up and left the auditorium, presumably to get a manager. But he came back after a few minutes, without a manager and appearing upset. Moments later, the argument between the two men resumed, and the man in the front row stood up.

Officials said Oulson asked Reeves if he reported him to management for using his phone.

Cummings said the men started raising their voices and popcorn was thrown. Authorities said Reeves took out a gun, and Oulson's wife put her hand over her husband, and that's when Reeves fired his weapon, striking Nichole Oulson in the hand and her husband in the chest.

"I can't believe people would bring a pistol, a gun, to a movie," Cummings said. "I can't believe they would argue and fight and shoot one another over popcorn. Over a cellphone."

Cummings, who said he was a combat Marine in Vietnam, said Oulson fell onto him and his son.

"Blood started coming out of his mouth," said Alex Cummings. "It was just a very bad scene."

Charles Cummings said his son went to call 911, while Cummings and another patron who claimed to a nurse began performing CPR on the victim.

A man sitting next to the shooter grabbed the gun out of his hand, and the suspect did not attempt to get away, Cummings said.

Oulson and his wife were taken by ambulance to a Tampa-area hospital, where the Chad Oulson died, Tobin said. His wife's injuries were not considered life-threatening.

Tampa Police spokeswoman Laura McElroy said in a news release that Reeves was a captain when he retired from the department in 1993. She added that he was instrumental in establishing the agency's first tactical response team. After he retired, Reeves worked security for the Busch Gardens theme park and was on the board of a neighboring county's Crime Stoppers organization. Reeves' son also is a Tampa officer, police said.