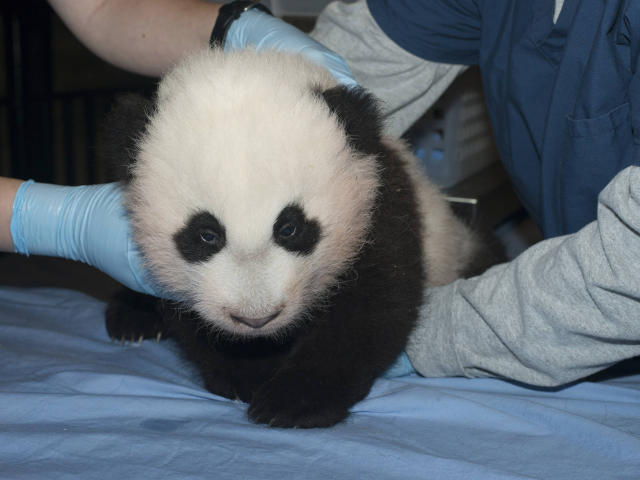 WASHINGTON - The National Zoo has a reputation as a leader in animal care, science and cute photo opportunities such as the naming of Bao Bao the baby panda earlier this month.

But a CBS News investigation has learned that behind the scenes, there are insider allegations of mismanagement involving animal care. Five sources with more than 35 years' combined experience at the National Zoo have raised concerns to CBS News about recent animal injuries, deaths and escapes.

The sources don't want to be identified for fear of retaliation. They say problems began last year when the zoo decided to double the population of the Cheetah Conservation Station, adding a half dozen new species but no extra space. Besides cheetahs, the CCS also houses zebras, gazelles and other species.

CBS News asked animal biologist and ethicist Marc Bekoff to look at the complaints. He was an independent reviewer of a 2005 National Academy of Sciences investigation of the zoo that found “systemic problems at the highest levels.”

Of the newly raised issues, Bekoff said: "I call it 'fetch and pray.' You get the animals and then you pray that the project will work out."

The CCS' new animal mix didn't always work out. Issues identified by the zoo sources include two newly acquired hornbill birds that were kept in an indoor shack for seven months because their exhibit yard wasn't ready. Only after a volunteer complained were the birds allowed in an outdoor space. But the wallaby that had to share its yard with these new arrivals became frightened, according to sources, bloodied its nose and spent much of its time frightened and hiding.

One of two new red river hogs quickly became malnourished and died of an infection. The other hog, along with oryxes and sitatungas (two types of antelopes), sometimes became overly aggressive when mixed together, and some were injured in vicious fights.

It's not unusual for animals to spar, but the zoo sources say management failed to predict easily foreseeable conflicts between species and genders, and had ineffective backup plans for separating and protecting the animals when the conflicts arose.

"It's no surprise to me as a field biologist that so many of them do not work out," Bekoff told CBS News. "They're just too hastily put together and they’re not well thought through."

"We take great care in introducing our animals to these various habitats and transitioning them. Ideally, these things wouldn't happen, of course," said Baker-Masson. "I think my colleagues were very well aware and they know these species and they know how to take care of these species. … Every single animal has a very specific course of action and a plan."

Bekoff says the zoo's plans appear to have been inadequate. "They should only be able to get the animals when it can be shown that they can properly house them and care for them."

Two animals in the CCS, a Dama gazelle and a pregnant kudu (another type of antelope), died when they got spooked on separate occasions and ran into barriers in their confined spaces, breaking their necks.

The gazelle death happened last month after a zebra attacked a veteran zookeeper. The commotion apparently frightened the gazelle, which is on the endangered species list. Zoo sources say it wasn’t found for hours. The pregnant kudu died last June. Zoo sources say as the animal lay suffering with a broken neck, workers were unable to quickly locate necessary veterinary records.

Baker-Masson says Dama gazelles and kudus are skittish animals by nature and were housed in adequate spaces that met the requirements of the American Zoological Association, which recently re-accredited the facility.

As for the hornbill birds that were keep indoors for eight months, Baker-Masson says the space was "more than adequate and it gave the staff a very good amount of time to prepare and work with the hornbills" but "ideally they would have [had] access to their outdoor yard space more quickly."

"There's not one single excuse that I would accept," he said. "Basically this is a form of animal abuse and animal neglect. …They get an 'F' in this project.'

Zoo sources also expressed concern about two escapes from the CCS: a vulture whose wings were allegedly not properly clipped and a red panda who managed to climb out of its exhibit. Both animals were later recaptured and zoo officials say the failures that allowed the escapes have been fixed.

CBS News has learned that the zoo convened a task force last summer to investigate the internal complaints about animal care at the CCS. The task force made findings last August and Baker-Masson says some of its recommendations are already being implemented.

As to why the National Zoo is withholding the information, Baker-Masson provided a number of rationales. First, she said that the task force report was still only a draft, four months after it was scheduled to be completed. However, when CBS News asked for the draft, she would not provide that either.

Later, in an interview, Baker-Masson said that the task force report is finished, but that the zoo isn’t ready to release it.

"We're more than happy to [release the task force report]," Baker-Masson told CBS News. "But we have to do it in a thorough and process-oriented way that makes sense."

She acknowledged that some of the concerns investigated were founded.

Another incident the zoo is keeping mum about is the November zebra attack on the zookeeper. Baker-Masson says that AZA standards require that there always be a barrier between a keeper and zebras, which can inflict serious bite wounds. But the zoo says three weeks after the attack, it still has not identified how the zebra got to the keeper and it would not release the incident report or other public information about it. The injured zookeeper was recently released after several weeks in the hospital.