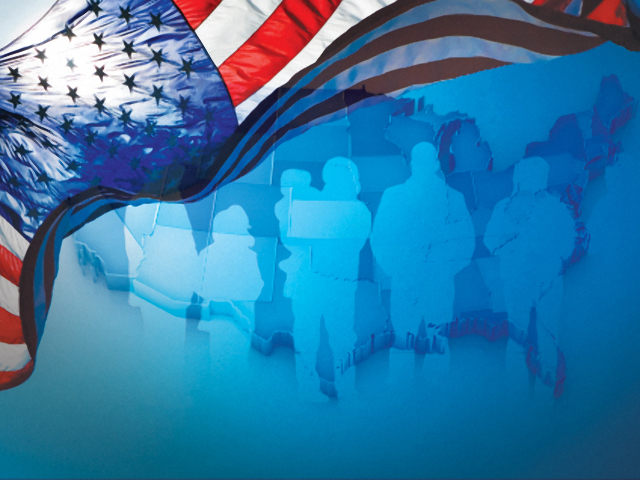 In an effort to overcome their 2012 electoral losses and reach out to Hispanic voters, the Republican National Committee is stressing the need to "champion" comprehensive immigration reform.

Sen. Marco Rubio, R-Fla., is leading the Senate efforts to pass legislation. Former Gov. Jeb Bush, R-Fla., told a conference of conservative activists immigration reform was crucial to U.S. economic growth. The signs all point to a GOP ready to embrace immigration reform and renew outreach efforts to the Hispanic community. The only problem? No one seems to have convinced the party's base.

Wednesday on Capitol Hill, staunch immigration foe Rep. Steve King, R-Iowa, held a six-hour press conference to oppose the immigration legislation currently being debated. He was joined by hundreds of Tea Party and conservative activists who had some choice words for immigration reform advocates and who booed even the mention of Rubio's name.

"You can never enforce immigration if you grant amnesty," read one poster in the crowd.

Rubio and other pro-reform Republicans have tried to cultivate the conservative wing of the party as they push for a path to legalization for the nation's estimated 11 million illegal immigrants. Rubio aides say he has met with many Tea Party groups to allay their concerns. The Florida senator is also a frequent guest on conservative talk radio and Fox News.

Polling suggests this outreach has paid off. A recent CBS News/New York Times poll found 83 percent of Republicans say they would support a path to citizenship for illegal immigrants if certain conditions are met.

Republican leaders' political calculation is that they won't win support from the nation's growing Hispanic population without addressing the anti-immigrant language and policies that alienated this growing voting bloc. During the 2012 presidential campaign, Republican nominee Mitt Romney's talk of "self-deportation" contributed to his dismal showing among Hispanics on Election Day. He garnered just 27 percent of their vote.

Chuck Laudner, a conservative activist in Iowa, says the current Senate bill would be a non-starter for Republicans in the Hawkeye State.

"Of course it all depends on what the end product looks like, but as it stands right now it would be devastating to his presidential prospects," Laudner says of any presidential candidate who supported the reform efforts.

Steve Deace, an Iowa talk radio host, published an open letter to Rubio in January warning him against participating in the Senate's "Gang of 8" immigration negotiations.

"Senator, can't you see it now, future television sets in Iowa bombarded with commercials from your GOP rivals quoting Steve King calling your plan 'a very bad idea' and that you're trying to 'pardon lawbreakers,'" Deace wrote.

Many of these activists simply don't buy the argument that anti-immigrant rhetoric hurt the GOP in 2012.

"I doubt that immigration had one percent to do with [President] Obama beating Romney. Romney lost to Obama on so many levels. And immigration reform doesn't even make the top ten," Laudner says. "I personally don't buy the argument that we have to give amnesty to get the Hispanic vote."

All this has forced the potential 2016 candidates to walk a tightrope.

That's why you saw Rubio on the Senate floor Thursday touting an amendment to strengthen border security. If he can support 700 miles of new border fencing and a doubling of border patrol agents, it may buy him cover for the pathway to citizenship for illegal immigrants already here. The question is, three years from now, will he be able to sell that position in the VFW halls of rural Iowa or the the barbecue joints of South Carolina?

Here's what else the potential 2016 candidates have been up to this week, courtesy of CBS News' Jaclyn Peiser:

Gov. Chris Christie, R-N.J.: Christie issued a statement on Wednesday mourning the passing of "Sopranos" star James Gandolfini. "It's an awful shock. James Gandolfini was a fine actor, a Rutgers alum and a true Jersey guy. I was a huge fan of his and the character he played so authentically, Tony Soprano." On Tuesday, Christie told a group of elementary school students that his favorite football team is the Dallas Cowboys, despite living in a state that mostly roots for the New York Giants or Philadelphia Eagles. The kids responded with a mix of boos and cheers but the Governor explained that he's loved the Cowboys since he was a boy.

Gov. Bobby Jindal, R-La.: Jindal pleaded with the Republican Party to make some serious changes in an op-ed for Politico. Jindal tells the party to stop mourning the past presidential elections and "put on your big boy pants." He also stresses the need to appeal to young voters and "get on the offense."

Former Secretary of State Hillary Clinton: Sen. Claire McCaskill, D-Mo., endorsed the Ready for Hillary super PAC on Tuesday. McCaskill, who supported Obama over Clinton in the 2008 primaries, is the first member of Congress to back the PAC. Earlier this week Clinton spoke at the Economic Club of Grand Rapids annual dinner in Michigan.

Vice President Joe Biden: Biden announced on Tuesday that the White House has "not given up" on tougher gun laws and background checks. The Vice President believes the initiative is going in a positive direction, however, he stressed the need for Congress to take action. "The American people are demanding it," he said.

Gov. Andrew Cuomo, D-N.Y.: The New York Governor is pushing a number of issues with the legislature this week. On Wednesday, a deal was reached on a plan to create tax-free zones for high tech startups. Legislators also reached an agreement on allowing the construction of Las Vegas-style casinos in Upstate New York. Meanwhile, on Thursday the state assembly passed Cuomo's Women's Equality act.

Former Gov. Howard Dean, D-Vt.: Howard Dean said Thursday that he would consider running for president in 2016. The former Vermont governor, who ran for president in 2004, said in an interview with CNN, "I am not driven by my own ambition. What I am driven by is pushing the country in a direction that it desperately needs to be pushed."