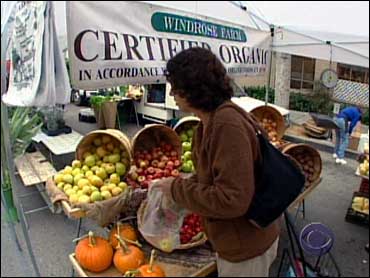 Shannon Kelly and her husband Eric are about as organic as it gets.

"Organic to the point of being a zealot, yeah," says Shannon.

After Shannon was diagnosed with cancer eight years ago, the couple started eating organic foods which, to be certified, are grown with few pesticides and no hormones or antibiotics. They believe it's part of the reason she has gotten better.

"My skin looks better. My hair looks better. My fingernails are stronger than they used to be. I mean, it's sort of crazy stuff but at the same time I don't know what to point to," she says.

The couple is so sure organic is best, they spend 20 percent of their income - far more than the U.S. average -- on what are much more expensive foods.

"I am paying triple, and I really don't care," says Eric.

Organic sales are surging 20 percent a year in the U.S. The total annual take: some $14 billion. But are organics really healthier and safer for you than so-called conventionally grown foods? The answer might surprise you.

"The idea that somehow eating organic foods is going to make you healthier, I think is just wishful thinking," says Mark Kantor, a professor of nutrition at the University of Maryland.

He says a crop grown under organic conditions has less pesticide residue than conventionally grown crops. But he says both kinds of crops have only harmless amounts.

"There is no health advantage," he says, adding "There's really no evidence that you are going to be any healthier in terms of pesticides."

As for the relative risks of contamination from potentially deadly bacteria like e-coli, Kantor says that organic crops are just as vulnerable to the bacteria as any other plants.

"There really isn't any major difference in contamination between organically grown produce and conventional produce. It's not really isn't an issue."

Shannon and Eric know that, and that it's critical to handle all food properly.

"I'm still washing my vegetables before I do any preparation with them," says Eric. "I'm not just kind of taking things and eating them straight out of the bag."

But they're still convinced organics are the way to go.

"My take on it is, that if you can get away from any man-made additives in food, you've got an advantage," says Eric.

More and more mainstream retailers are stocking their shelves with organics. But be sure to read the labels and look for the U.S. Department of Agriculture label. There's a lot out there that's called "organic" but does not, in fact, meet federal standards.