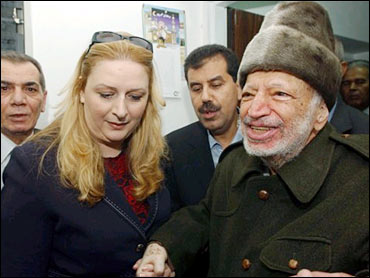 Yasser Arafat's wife lashed out at his top lieutenants Monday, accusing them of traveling to Paris with plans to "bury" her husband "alive."

In a phone interview from Arafat's bedside at Percy Military Teaching Hospital in Clamart, France, Suha Arafat told Al-Jazeera television that she was issuing "an appeal to the Palestinian people." She accused his top aides, who had planned to travel to Paris Monday, of conspiring to usurp her husband's four-decade long role as Palestinian leader.

"Let it be known to the honest Palestinian people that a bunch of those who want to take over are coming to Paris," she screamed in Arabic over the telephone.

"You have to realize the size of the conspiracy. I tell you they are trying to bury Abu Ammar alive," she said, using his nom de guerre. "He is all right and he is going home. God is great. Abu Ammar is well and will return to his homeland. And it will be a revolution until we triumph."

Mrs. Arafat's comments come in sharp contrast to those of his top aides, who in the past week have many times called on various Palestinian factions to avoid infighting during the illness of their 75-year-old leader.

An Al-Jazeera producer said the broadcaster is confident it was Suha Arafat on the telephone and that she had called their Ramallah office from Arafat's bedside at a French military hospital.

France's foreign minister described Yasser Arafat's condition Sunday as "very complex, very serious and stable," but did not give details about his exact state or diagnosis.

Asked about reports that the 75-year-old leader is brain dead, Barnier replied: "I wouldn't say that."

Both the Palestinians and Israel have been making contingency plans to try to avoid increased violence in the event of Arafat's death.

But a few hours later, Shaath switched gears and said the three will be in Paris Monday, as originally planned.

Tayeb Abdel Rahim, a senior Arafat aide, said their trip was postponed to protest her comments. "They are angry with Suha and don't want to go," he said at a news conference in Ramallah. "What came from Suha doesn't represent our people... If the president were to hear that, he would reject it completely."

He went on to accuse Mrs. Arafat of wanting "to destroy the Palestinian leadership's decision and to be the lone decision maker."

The Israeli newspaper Haaretz Daily, on its web site, quotes Israeli defense sources as saying they believe Arafat is on life support and will be disconnected on Tuesday.

Tuesday night is the holy day of Lailat al-Kader, marking the night Muslims believe God revealed the Koran to the prophet Mohammed.

Some Palestinians have complained that Suha Arafat has gained too much power, as she controls the flow of information about Arafat's condition and has limited access to ailing leader.

"She is not part of the Palestinian leadership," Arafat security adviser Jibril Rajoub told Israel's Channel Two TV on Sunday.

Suha Arafat, who lives in Paris, is widely believed to have control of vast amounts of PLO money.

Mrs. Arafat had not been to the West Bank or seen her husband since the latest round of Palestinian violence began in 2000. That changed on Oct. 29th, when she went to his headquarters in Ramallah and was by his side as he prepared to board the helicopter on his way from the West Bank to the hospital in France.

On Thursday, Qureia and Abbas were chosen by other party leaders to at least temporarily take over the responsibilities normally shouldered by Arafat.

And although both have called for unity among Palestinians, Sunday brought some cracks in that united front.

Haaretz reports Abbas Sunday received a letter by messenger from Mrs. Arafat while at the same time, Hamas and Islamic Jihad sources began attacking Qureia and Abbas' legitimacy as leaders.

"We must set up a joint national leadership to make decisions until elections are held," a Hamas spokesman told Haaretz. "What was permitted to Yasser Arafat is forbidden to others and we must not let interested parties in the PA and PLO control Palestinian destiny. Arafat derived his authority from being a symbol, but others don't have that privilege."