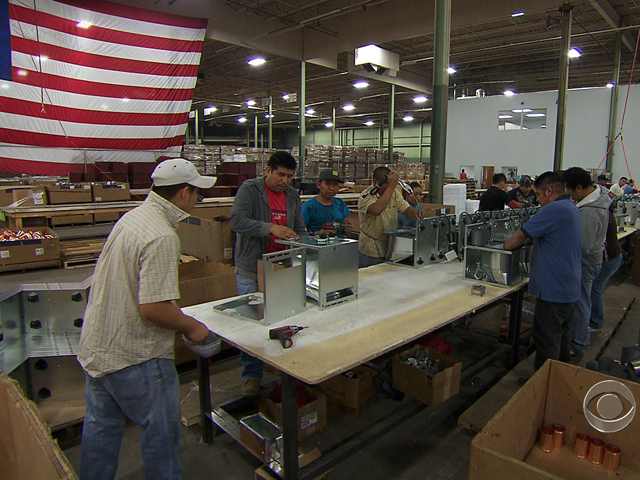 (CBS News) It's been said many times that manufacturing jobs that the United States has lost to other countries will never come back. But CBS News correspondent Jim Axelrod reports that in one Ohio community, it's a different story.

At a factory in north Canton, Ohio, Byron Jenkins is working a job that less than a year ago didn't exist.

"People just want to get a good job and we can't find them no place," he said.

"It took a long time, but I did," said Jenkins.

His new job is at Suarez Industries, home of the Edenpure space heater -- making more than twice what he did at McDonald's.

"All those teenager jobs, they're no good for a grown man," said Jenkins. "I used to get paid every two weeks and get paid half of what I'm getting paid now."

Jenkins is making grown-man money because his employer is turning conventional rust-belt wisdom upside down. Here, the idea that it's cheaper to produce things overseas has come face to face with Yankee ingenuity.

Operations manager Hope Paolini wanted to move production of this portable heater from China to the U.S. to better control production and cut costs. So she literally engineered most of the labor out. Her new version required fewer screws and almost no rivets, which meant fewer workers to assemble the product.

"The fewer screws you have to get somebody to put into a space heater, the less you have to pay in labor costs," pointed out Axelrod.

That meant 450 new jobs at this factory and what's good for Edenpure is also good for Ohio. The heater's new American power cord supplier added 13 jobs. The sheet metal stamper added 20. The plastic molding facility another 18.

"If you figured out how to bring jobs back from China to the United States -- manufacturing jobs -- why isn't everybody doing it? Axelrod asked Paolini.

"It's easier to say, 'It can't be done,' than to get up early and to work hard and to make it happen," she said.

A homemade lesson that American manufacturers are just beginning to rediscover.