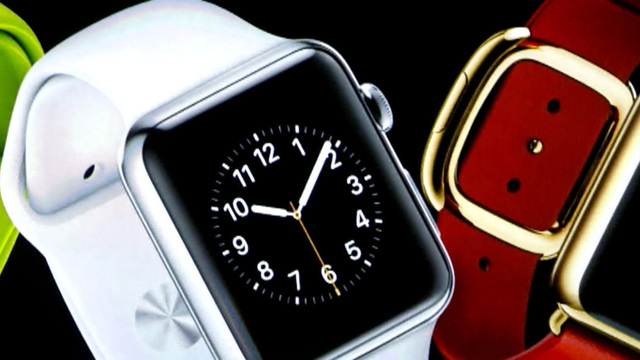 Apple fans will be watching Monday as the company holds a major press event at the Yerba Buena Center for the Arts Theater in San Francisco.

The star of the show is expected to be the long-anticipated Apple Watch. A prototype of the coveted wearable device was first unveiled in September at the launch event for the iPhone 6 and iPhone 6 Plus. However, the watch remained in development, and a number of promised features such as health tracking reportedly have been changed or eliminated since then.

The watch is expected to go on sale in April; Apple has not yet announced the exact date. It will be Apple's first major new product introduction since the iPad came out in 2010.

Apple CEO Tim Cook revealed last fall that the Apple Watch will come in three models: the aluminum and glass Apple Watch Sport, starting at $349; a stainless steel model with interchangeable bands; and a top-of-the-line 18 karat gold version, whose price is still a closely guarded secret.

Although the Apple wearable still has cachet, it is facing increased competition in the smartwatch category from brands like Samsung and the startup Pebble, whose Pebble Watch has been a hit on Kickstarter.

If you want to watch Apple's event, you can see a live stream on Apple's website Monday beginning at 1 p.m. Eastern, 10 a.m. Pacific. The live stream can only be viewed on an Apple device running the following software: Safari 5.1.10 or later on OS X 10.6.8 or later, or Safari on iOS 6.0 or later. To view on Apple TV you'll need a second- or third-generation device with software version 6.2 or later.

No matter what kind of device you have, you can follow CNET's live blog of the Apple event here. "Preshow" coverage starts at 11:30 a.m. Eastern, 8:30 a.m. Pacific. (And don't forget, it's daylight saving time!)