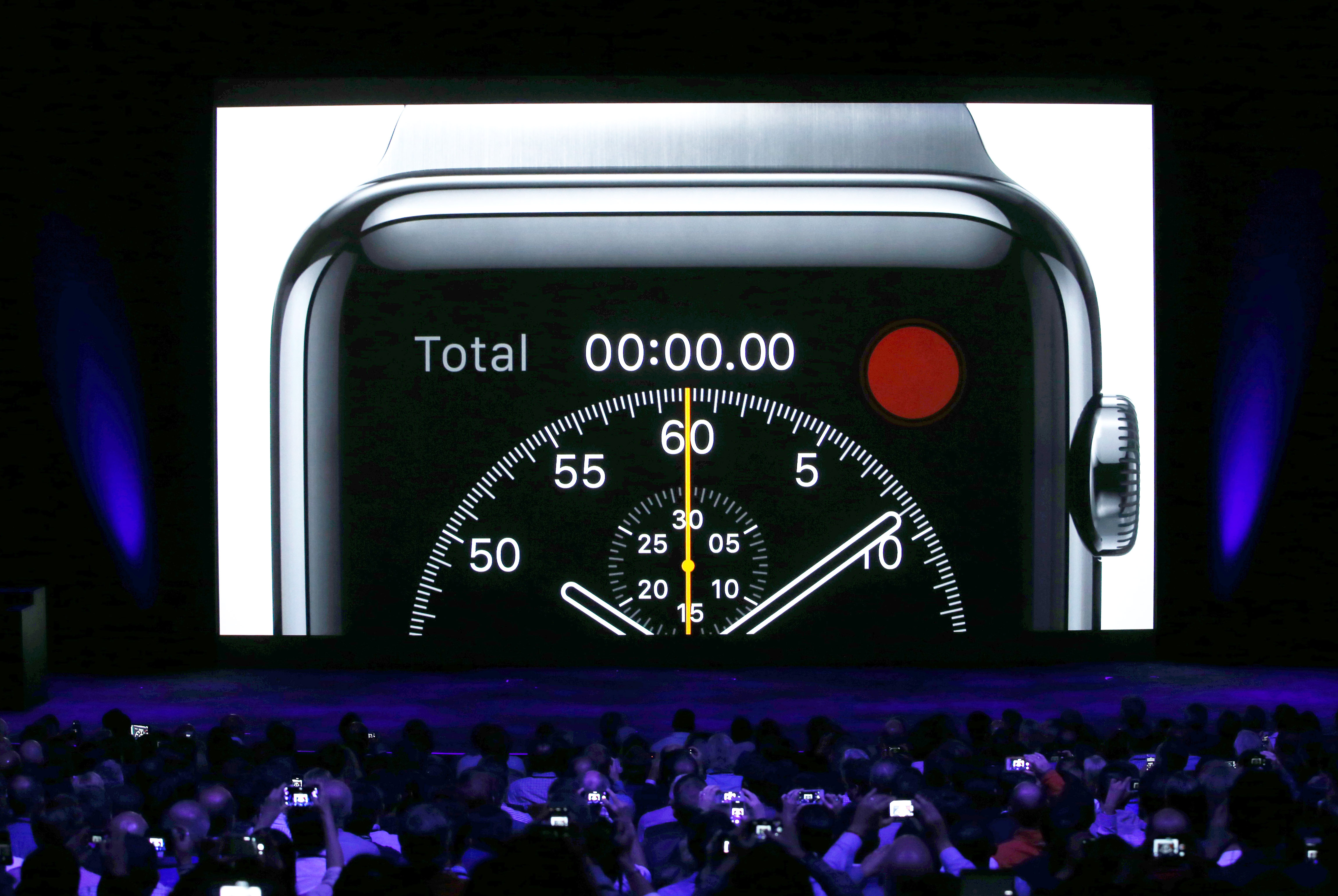 Apple announced Apple Watch, its new wearable device, along with its new iPhone 6 and iPhone 6 Plus at its event at the Flint Center in Cupertino, California, Tuesday.

Apple CEO Tim Cook unveiled the company's first foray into smartwatches, which have yet to take off in a big way with consumers. The square-faced new Apple Watch is a precise timepiece (plus or minus only 50 milliseconds) available in two sizes with either stainless steel, aluminum or 18 karat gold finishes. Each comes with multiple interchangeable watch bands, and the display screen also has many different options for customized looks.

As for the technology, "It is not a shrunken iPhone," Cook assured the audience, but a "new, innovative way to communicate directly from your wrist. And it is so much more."

Apple paid close attention to styling, functionality, and how it fits into the Apple family of devices and apps. "In terms of functionality, it's not all that much different that what we've seen before from other smartwatch manufacturers, but the interface is very clean, very polished," observed CNET Editor-at-Large Tim Stevens.

Apps are displayed on the face of the watch. The digital crown, the small button on the side of the watch, acts as a home button and a navigator. You can also interact with apps with a swipe across the screen or a gentle tap. Video, messaging, health monitoring, and others features appear under a nearly indestructible sapphire screen. It also has Apple Pay, the company's new digital wallet system, built in.

Apple Watch requires either an iPhone 5c, 5s, 6 or 6 Plus. It charges with a magnetic charger. Prices start at $349. The watch will be available early next year.

Kevin Lynch, ex-Adobe CTO, has been in charge of the Apple Watch development team, working in secrecy while the media and Apple fanatics speculated about what a device many dubbed the "iWatch" might turn out to be. At Tuesday's event, Lynch displayed a working model of the Apple Watch, showing off many of its key and interesting features.

A customizable cloud of icons appears on the Apple Watch's face around the watch face app. You can customize the arrangement of apps and the appearance of the watch face. For example, with a watch face called "astronomy" you can display an earth on the watch face, then fly to the moon, or review the actual positions of planets in our solar system.

With a swipe of your finger that Apple calls "Glances," you can keep track of your appointments, stock quotes, the weather, music, or whatever you consider your most important apps.

The Apple Watch provides notifications of whatever you wish with vibration or sound. You can respond to texts with quick reply icons. You can record a voice message, transcribe that to text, or use animated emojis that can be customized on the fly. You can use Siri on the Apple Watch to search the web.

Photos you mark as Favorites on other Apple devices are displayed automatically on the Apple Watch.

Apple Watch can act as a GPS device, not only showing you the way on the watch face, but nudging you on your wrist as you navigate with an "invisible guide" called "Taptic touch."

The Apple Watch comes with a new health and fitness app. Users can exchange health monitoring data with each other as it is happening, including heart rate, activity, and calories consumed.

WatchKit will allow third party developers to develop apps specifically for the device. For example, Apple said W hotels will allow you to wave your Apple Watch at your hotel room door to get in.

The question remains whether consumers will want one. The digital wallet distinguishes this smartwatch from others on the market at a starting price only slightly higher than its competitors.

CNET has more on the Apple Watch and complete coverage of the iPhone 6.