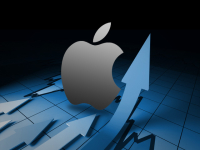 NEW YORK — Apple's stock broke above $500 for the first time Monday. It was the latest step in a rally that began more than two weeks ago, when the company reported staggering sales and profits for the holiday quarter.

Apple Inc. and Exxon Mobil Corp. have been vying for the position as most valuable company in the world since last summer, but the latest rally has made the gadget maker 17 percent more valuable than the oil company. Its market capitalization is now $465 billion, compared to Exxon's $400 billion.

On Jan. 24, Apple posted net income of $13.06 billion for the quarter that ended in December, more than doubling its profits from the year before. Sales were $46.3 billion, up 73 percent from a year ago.

Even before it posted blow-out results, Wall Street analysts had pointed to a big gap between Apple's share price and its earnings. By common methods of valuation that compare a stock price to earnings and earnings growth, the stock should be worth much more.

The average target price of Apple shares given by 37 analysts who have updated their ratings since the Jan. 24 report is $588, according to FactSet data.

Analysts say the company's policy of keeping its cash rather than paying a dividend has been hurting the stock. Value-oriented funds are often forbidden from investing in companies that don't pay a dividend, and growth-focused funds are often tapped out - they're heavily invested in Apple already, and likely don't want to increase their holdings.

However, company watchers expect Apple to start paying a dividend this year. On a conference call after the earnings report, chief financial officer Peter Oppenheimer said the board was in "active" discussions about the company's use of cash.

Apple looks set to launch sequels in its hit iPhone and iPad franchises this year. There's also speculation that it will move into the TV market.