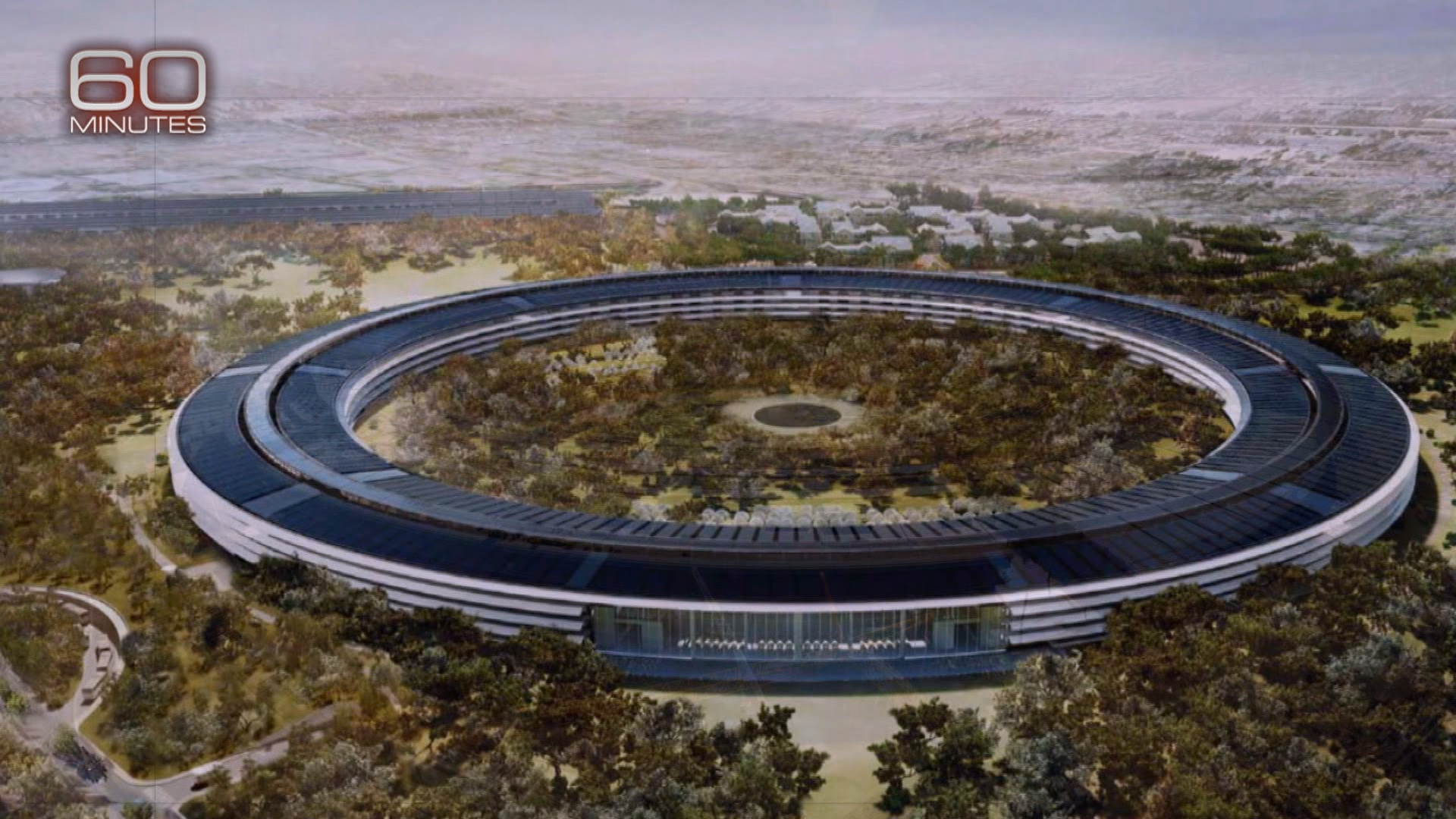 It's called the edifice complex, and it carries a curse: A high-flying company builds a beautiful new headquarters, then heartbreakingly loses altitude. Some wonder if Apple (AAPL), which is constructing a massive new palace near the tech titan's long-time California office, is the latest to fall prey to this hex.

From Bank of America (BAC) to Sears Holdings (SHLD), history is littered with instances of corporate icons that built magnificent architecture to consecrate their glory, only to see fate humble them.

At this stage, to its many fans, Apple still enjoys an air of indomitability. Boasting the world's second-largest market value, the company inspires enormous consumer enthusiasm. Its flagship iPhones amass annual sales that eclipse the individual GDP of 66 percent of the world's nations.

But the worry is that Steve Jobs' juggernaut may have seen its best days. That without founder Jobs, who died in 2011, the company has lost its creative mojo. Evidence: New innovations like Apple Watch and Apple Music haven't caught fire.

Adding to the unease is Apple's uninspiring recent quarterly results. Growth ebbed, as iPhone sales (which make up two-thirds of its revenue) came in below analysts' estimates. Worse, the company forecasted that revenue in the current quarter will decline for the first time since 2003. As a result, the stock is down 20 percent over the past six months, more than double the slide of the Standard & Poor's 500 index.

Apple's new headquarters is a worthy monument to its awe-inspiring scale and global reach. Designed by storied British architect Norman Foster, the building is a huge glass ring dubbed "the spaceship," for its resemblance to a UFO.

The $5 billion project, located across the street from Apple's current Cupertino, California, location, is 2.8 million square feet and a mile in circumference. It's powered by a daunting array of solar panels. Housing 12,000 employees, the Apple-plex is slated to open later this year.

The company did not respond to request for comment.

But IAC shareholders have done very well over past years, in large part due to founder Barry Diller's strategy of spinning off subsidiaries. The most recent example is Match Group (MTCH), the dating site that went public last fall. While Match is off slightly from the offering price, dating services are popular, and its future seems promising.

Although nobody has established a mathematical correlation between erecting a shiny, monumental HQ and business distress, the sequence has occurred often enough to merit attention.

A theory called the Skyscraper Index, holds that massive new corporate buildings demonstrate that growth is peaking and woeful times are coming -- for the organizations that built them, as well as the economy at large. If so, that explains the Great Depression (the Empire State Building), the Asia Crisis (Malaysia's Petronas Twin Towers) and the Great Recession (Dubai's Burj Khalifa).

Internet pioneer Marc Andreessen, a partner in venture capital firm Andreesen Horowitz, listed "pouring huge money into overly glorious new headquarters" as one of the 10 signs that show companies are riding for a fall.

And back in 1958, C. Northcote Parkin­son noted this phenomenon in his classic book, "Parkinson's Law," whose best-known dictum is that work expands to fill the time available. But he also wrote that when organizations expand into bigger quarters, they often lose their vitality.

For sure, if Apple does succumb to the edifice complex curse, it will join a long roster of tech leaders that floundered following the ribbon cuttings.

IBM (IBM), once the ruler of tech devices, as Apple is now, completed its 41-story colossus in Manhattan in 1983. Since then, Big Blue retreated from computer making and shrank as a presence in the tech world. Similarly, Yahoo (YHOO) opened its sprawling new home in 2002, amid the tech bust and the start of the company's slide into its current morass.

The classic cautionary tale about corporate vanity and real estate is that of Sears Holdings, now a bedraggled batch of third-rate department stores. Yet four decades ago, it was the world's largest retailer, then called Sears Roebuck.

In 1973, the company consolidated hordes of employees into the new Sears Tower in Chicago. The majestic 108-story building was the tallest on earth until 1998, ceding the title to Malaysia's Petronas Twin Towers. By 2009, after big-box stores ate it alive, Sears relinquished the skyscraper's name to insurance broker Willis Group, now known as Willis Towers Watson (WLTW).

In recent times, the most harrowing saga of high-rise hubris involved Bank of America, which was a burgeoning power until it made a very ill-advised move during the financial crisis. The banking giant bought ailing subprime mortgage lender Countrywide, thinking it a terrific value play.

The acquisition proved to be a nightmarish collection of toxic subprime loans that blew up. Bank of America didn't do enough due diligence, to say the least. The bank endured a painful restructuring and paid an unholy amount in penalties, including almost $17 billion to settle a federal probe into its mortgage practices.

The banking behemoth completed its 51-story New York skyscraper in 2009. Although still based in Charlotte, N.C., it wanted a tower in the nation's financial center to showcase its prominence. While all the major banks suffered from the worldwide financial debacle, Bank of America got hit the hardest. The same blindly overweening ambition that led to the New York building led to Countrywide, as well.

To be sure, the company seems to finally be emerging from this imbroglio and still is the second-largest U.S. bank by assets. But if the edifice complex curse holds true, more misfortune awaits. It, and Apple, must hope that for them the ill effects prove temporary -- as they were not for Sears, IBM, Yahoo and so many others.

How much is a NYC taxi medallion worth these days?
Larry Light