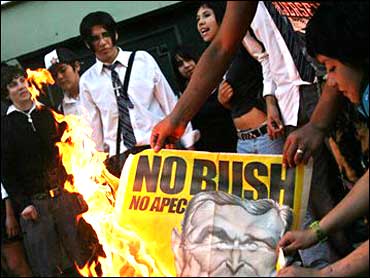 Ministers representing 21 Pacific Rim economies pledged Thursday to push hard for a new trade treaty that would slash agricultural subsidies and lower tariff barriers in a bid to boost the planet's economy.

After concluding two days of talks prior to a weekend summit of leaders from the Asia-Pacific Economic Coopoeration forum, the ministers welcomed the revival of World Trade Organization negotiations that are scheduled to go into high gear next year.

Talks launched three years ago in Doha, Qatar, to create a binding trade treaty for the 147-nation WTO group faltered last year with bickering over agricultural subsidies, but gained ground this year after negotiators managed to create a framework of a new global trade accord.

"We expect (APEC) will play a pivotal role in pushing the Doha round to conclusion," said Australian Trade Minister Mark Vaile. "It was quite a significant meeting and one that has achieved a great deal."

In the communique released Thursday, the ministers also recommended that leaders conduct a feasibility study for a Free Trade Area for the Asia-Pacific region, an idea offered by the APEC Business Advisory Council, the group's business lobby.

A trade deal among APEC nations would form a bloc dwarfing the European Union and the proposed Free Trade Area of the Americas currently under negotiation for a land area spanning from Alaska to Argentina.

The ministers also called for members to draw up a list of "best practice" standards for future bilateral and regional free agreements.

"The mood is very upbeat and very positive as far as the WTO is concerned," said Australian Trade Minister Mark Vaile.

Vaile made the comments just after the United States and Australia settled last-minute differences over a free trade deal, announcing an agreement to take effect in January 2005 that would add billions of dollars in new trade benefits for both nations.

But demonstrators who believe free trade benefits only rich nations took to the streets and protested, despite being pushed back repeatedly by Chilean police spraying tear gas from jeeps and blasts of water from military-style trucks.

The protesters, also upset by President Bush's upcoming weekend visit to the APEC conference, were knocked to the ground as they fled, pedestrians ran for cover and businesses shut their doors.

But the crowd of mostly university students managed to regroup, shutting down traffic and yelling, "Get out of here, Bush," and "We don't want to be an American colony."

The protests ended after several hours and did not interrupt the high-level talks taking place at a convention center several miles from the Chilean capital's downtown area.

There were no reports of injuries from the clashes on the streets of Santiago, but police detained nearly 400 protesters and took them away in buses. Among those detained and later released was Rodrigo Soto, who heads Amnesty International's Chile office.

Secretary of State Colin Powell arrived in Santiago late Wednesday night to meet with APEC ministers. Mr. Bush is to meet with other APEC leaders, including Chinese Premier Hu Jintao and Japanese Prime Minister Junichiro Koizumi, at the summit this weekend after the ministers conclude their discussions.

Several bilateral meetings between leaders are planned. Hu and Koizumi were expected to meet one-on-one, according to Kyodo News agency, which cited government sources.

Ties between Japan and China have been strained by the incursion of a Chinese nuclear submarine into Japanese waters last week.

Mr. Bush is expected to bring up North Korea during the summit, urging other leaders involved in multinational talks to persuade the reclusive nation to abandon its nuclear ambitions.

For more than a year, the Bush administration has been pressuring China to stop linking its currency at a fixed rate to the U.S. dollar, which American manufacturers contend has resulted in the Chinese currency being undervalued by as much as 40 percent. That gives Chinese products a big competitive advantage against American goods.

The Chinese have said they want to move to a more flexible currency system but cannot until they make reforms to the country's financial system. They have given no timetable for when they believe they will be ready to allow their currency's value to be set by market forces.