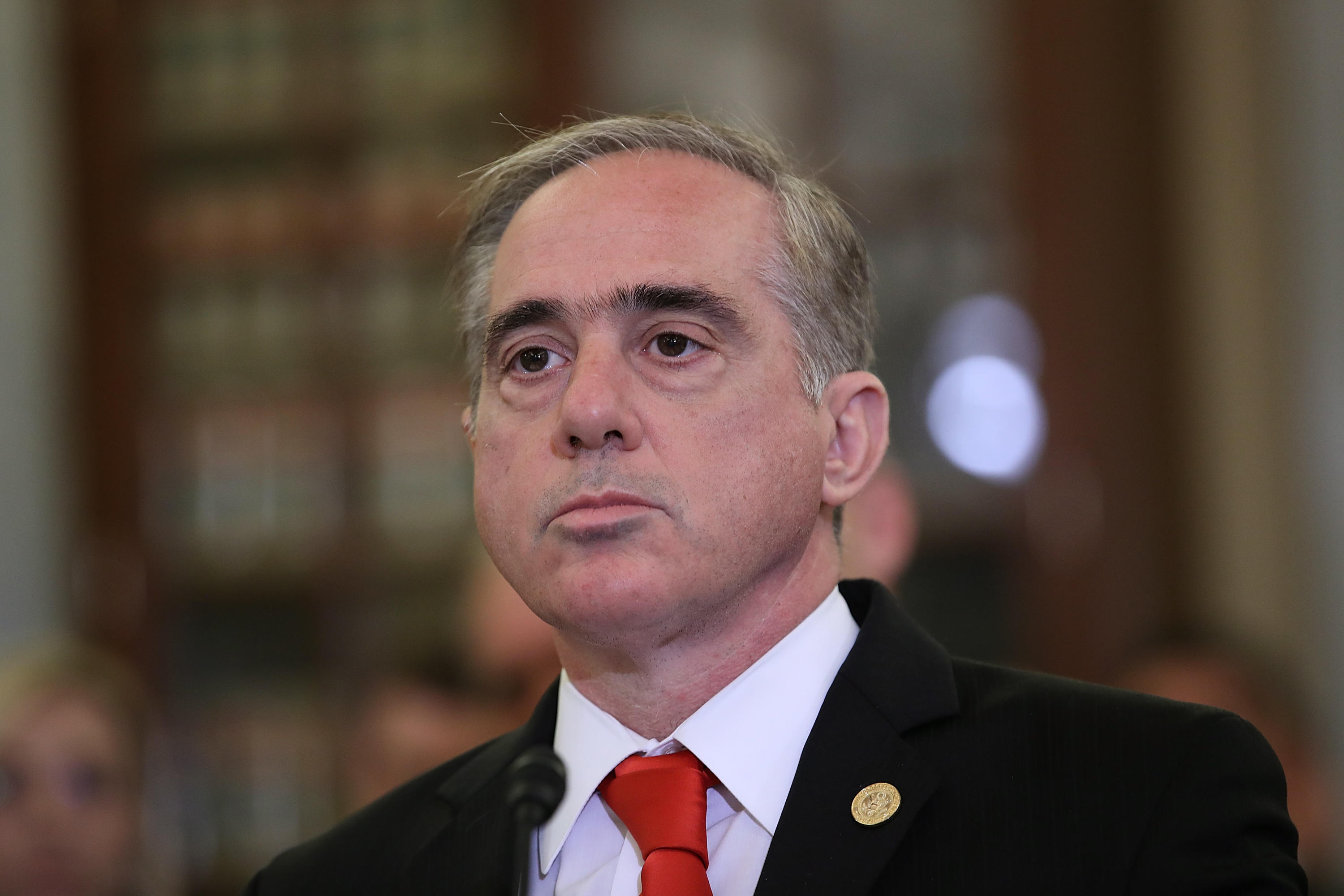 President Donald Trump is considering ousting embattled Veterans Affairs Secretary David Shulkin, who has faced an insurgency within his department and fresh allegations that he used a member of his security detail to run personal errands.

Mr. Trump has floated the notion of moving Energy Secretary Rick Perry to the VA to right the ship, believing Shulkin has become a distraction, according to two people familiar with White House discussions. They were not authorized to discuss internal deliberations.

Shulkin has faced several investigations over his travel and leadership of the department, but until now has received praise from the president for his work to turn it around. The news comes after Trump fired Secretary of State Rex Tillerson Tuesday.

Mr. Trump raised the idea with Perry on Monday but did not offer the job to him, according to one White House official. Mr. Trump has been angry with Shulkin, the official said, but is known to float staffing changes without always following through.

Shulkin did not respond to requests for comment via phone and text message. He has been holding on to his job by a thread since a bruising internal report found ethics violations in connection with his trip to Europe with his wife last summer. A spokeswoman for Perry also had no comment.

The VA inspector general also is looking into a complaint by a member of Shulkin's 24-7 security detail that he was asked to accompany the secretary to a Home Depot and carry furniture items into his home, according to two people familiar with the allegation who requested anonymity to discuss an ongoing investigation.

Within the agency, a political adviser installed by Mr. Trump has openly mused to other VA staff about ousting the former Obama administration official. And a top communications aide has taken extended leave following a secret, failed attempt to turn lawmakers against him.

"The honeymoon is ending with a crash that hurts veterans most of all," said Paul Rieckhoff, founder and CEO of Iraq and Afghanistan Veterans of America, who has been a close observer of VA for more than a decade. "VA always has bad news, but Shulkin's ethical and leadership failures are still significant — despite any internal attacks."

Senior administration officials describe a growing frustration that Shulkin repeatedly ignores their advice, only to beg for their help when he runs into ethical trouble. The officials, who spoke on condition of anonymity in order to describe sensitive internal discussions, say Shulkin has been given a final warning to end the swirl of distractions. The administration is currently seeking to push Mr. Trump's agenda of aggressively expanding the Veterans Choice program, which major veterans groups worry could be an unwanted step toward privatizing VA health care.

The issue came to the fore at a White House meeting last week, when chief of staff John Kelly told Shulkin to stop talking to the news media without clearing it first with the White House and to stay focused on fixing veterans care.

Shulkin was escorted from that meeting to the Oval Office, where Trump questioned him about his efforts to push the Choice expansion, which lawmakers are now seeking to include in a massive spending bill that must be approved by next week to avert a government shutdown.

With Shulkin present, the president telephoned conservative Pete Hegseth, a "Fox & Friends" contributor who was vetted in late 2016 for VA secretary, to get his views on how to proceed with the expansion. Hegseth, a former president of the conservative group Concerned Veterans for America, declined to comment for this article.

Dan Caldwell, executive director of CVA, lauded the White House focus on Choice amid the ongoing controversies involving Shulkin. "Despite the internal drama going on in the VA, which has been a distraction, Congress has continued to work to a solution that everyone can rally around," he said.

Shulkin is blaming the internal drama on a half-dozen or so political appointees whom he had considered firing, only to be blocked by Kelly.

"I regret anything that has distracted us from what we should be focusing on, which is serving veterans," Shulkin told the AP shortly before release of an inspector general report that faulted the VA for "failed leadership" and an unwillingness or inability of leaders to take responsibility for accounting problems at a major VA hospital that put patients at risk.

Early in the administration, Shulkin was often seen at Trump's side, waving to crowds at campaign-style events in Pennsylvania or addressing reporters in a doctor's lab coat as he tutored Trump on telehealth. Trump called him the "100-to-nothing man" — a reference to his unanimous Senate confirmation vote — and publicly teased that he probably would never be fired because he had successfully shepherded legislation to improve accountability at the VA and speed disability appeals.

By December, relations at the VA between Shulkin and several political appointees began to fray over philosophical differences.

In a Dec. 4 internal email obtained by the AP, Jake Leinenkugel, a senior aide installed as part of a Cabinet-wide program to monitor secretaries' loyalty, said Shulkin was becoming increasingly distrustful and regarded Camilo Sandoval, a senior adviser in VA's health arm, as a White House "spy."

The email to Sandoval alluded to White House efforts to gain more control, including ousting Shulkin's chief of staff, and said the secretary had been "put on notice to exit" once the administration gets the Choice legislation through Congress.

There were other signs.

At a Jan. 17 hearing, Sen. Jerry Moran, R-Kan., openly blamed the deadlock over Choice to Shulkin's ever-shifting positions. "I am of the opinion that our inability to reach an agreement is in significant part related to your ability to speak out of both sides of your mouth, double-talk," Moran said. A grim Shulkin denied the accusation, but the White House was later forced to clarify its position on the bill due to lawmaker confusion.

Last month, the inspector general released a blistering report finding ethical violations in Shulkin's trip last July to Denmark and England that mixed business with pleasure. The IG found that Shulkin's chief of staff Vivieca Wright Simpson had doctored emails to justify his wife accompanying him at taxpayer expense. Wright Simpson retired after the report was issued.

Seizing on the report, John Ullyot, a top communications aide, and VA spokesman Curt Cashour told the Republican staff director of the House Veterans Affairs Committee that Shulkin would be out by that weekend and asked if Republicans would push for his removal.

The staff director, John Towers, told Ullyot "no," and made clear that committee Chairman Phil Roe had expressed support for Shulkin, according to a House aide familiar with the phone conversation. That aide also requested anonymity in order to discuss a sensitive internal matter. In a statement, Cashour and Ullyot deny that account, saying the call was intended instead to warn the committee that some of Shulkin's denials of wrongdoing were unfounded.

Asked this week about Ullyot's current leave of absence, Cashour released a statement saying, "there are no personnel changes to announce at the Department of Veterans Affairs."

For now, Shulkin appears to be hanging on. At a Cabinet meeting last Thursday, Shulkin took a different seat reserved for him — next to the president.