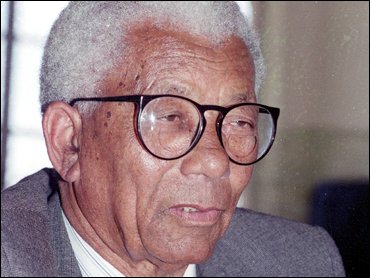 Walter Sisulu, the quiet giant of South Africa's anti-apartheid struggle for five decades, has died after a long illness. He was 90.

Sisulu died at 9 p.m. Monday at home in the arms of Albertina, his wife of nearly 59 years.

"His absence has carved a void. A part of me is gone," former President Nelson Mandela said in an impassioned statement lamenting the loss of his friend and confidant.

"During the past 62 years our lives have been intertwined. We shared the joy of living, and the pain.

"Together we shared ideas, forged common commitments. We walked side by side through the valley of death, nursing each other's bruises, holding each other up when our steps faltered. Together we savored the taste of freedom."

Flags at all government offices will fly at half-staff Wednesday, and President Thabo Mbeki said he will ask the Cabinet to hold a state funeral for Sisulu.

Sisulu brought Mandela into the African National Congress, co-founded its militant youth league and helped lead the organization into the post-apartheid era.

He never became president of the ANC or a member of parliament. He rarely was feted by foreign governments and did not win the Nobel Peace Prize as Mandela did.

"Nevertheless, he stood head and shoulders above all of us. What was the reason for this? Because he had the gift of humility and simplicity," Mandela said Tuesday outside the Sisulu house in Johannesburg after paying his condolences to the family.

A succession of government officials and anti-apartheid fighters who had been jailed with Sisulu also visited the family.

Mbeki mourned the death of a "beloved friend and statesman of liberation."

Because of his modesty and humbleness, many do not realize how important Sisulu was, Mbeki said.

"This is a giant among our people," he added.

Sisulu's entire family threw itself into the anti-apartheid struggle and suffered deeply for it. He was imprisoned for more than 25 years. His wife Albertina's movements and speech were restricted from 1964 to 1981, and she spent 10 years under house arrest. Four of their five children spent time in exile or in prison.

"This government doesn't feel comfortable unless it has a Sisulu in jail," his son, Zwelakhe, once joked.

Sisulu was the son of a poor family in the Xhosa homeland of Transkei. He left home for Johannesburg at 15 and worked as a baker's assistant, domestic servant, dairy worker, factory laborer and gold miner.

Sisulu's life mirrored the history of his beloved African National Congress. They were born in the same year, 1912, and the young Sisulu developed a deep-rooted militancy because of his mixed-race ancestry and hatred of his family's deference to whites.

As a young worker in Johannesburg, he often found himself leading labor disputes with bosses.

Sisulu joined the ANC in 1940. He gave advice to Mandela and Oliver Tambo, both of whom would become ANC presidents. Tambo died in 1993.

In a 1994 interview with Associated Press Television News, Sisulu welcomed the end of apartheid that year but said much more needed to be done.

"I can never be satisfied until we have consolidated the unity of the people of South Africa, until the economic position has been radically improved and … we are able to meet the aspirations of our people," the white-haired, bespectacled Sisulu said.

Mandela, Tambo and Sisulu formed the ANC Youth League in 1944, hoping to press the older leadership to adopt more aggressive tactics. With the league's backing, Sisulu was elected ANC secretary general in 1949 and helped organize the 1952 "defiance campaign," a program of civil disobedience against apartheid laws.

In December 1956, Sisulu, Mandela and 154 other South Africans of all races were charged with treason for supporting the Freedom Charter calling for a nonracial democracy and a socialist-based economy. All were acquitted after a five-year trial.

Sisulu was convicted in March 1963 of furthering the aims of the banned ANC and encouraging blacks to strike. He was sentenced to six years in prison and placed under house arrest while appealing.

He went underground and joined the ANC's guerrilla wing, exasperating the government when he used a secret ANC transmitter to send a pirate radio message exhorting the nation to unite to overthrow apartheid.

In July 1963, he was arrested with others at the ANC's secret headquarters in Rivonia, outside Johannesburg.

Sisulu and Mandela were convicted in 1964 of plotting anti-government sabotage in a highly publicized trial that showed the world the extent of South Africa's racial discrimination.

The death penalty was expected, but under international pressure, the judge gave the defendants life sentences, and Sisulu and Mandela were sent to the notorious Robben Island prison off Cape Town.

In his decades in the island prison, Sisulu was regarded with awe by his fellow political prisoners and he taught classes on the history of the apartheid struggle.

Released in 1989, Sisulu was greeted by cheering supporters in the black township of Soweto.

"By eradicating apartheid we will be contributing to peace at home and to world peace," Sisulu said then. "We dedicate our lives to this end."