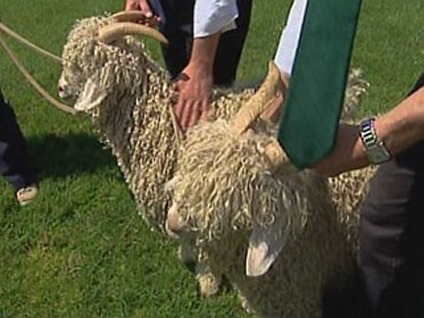 Rep. Anthony Weiner (D-N.Y.) has taken his fair share of shots from politicians and members of the media. And now he can add goats to that list.

According to the Hill, Weiner was struck in the hand by one of the two male mohair goats today at a press conference.

It wasn't immediately clear which goat -- Lancelot or Arthur -- was the culprit. But we do know that Weiner ended up with a cut on his right hand after the goat-related mishap and that blood was drawn.

Weiner brought the goats with him (seen at left) to serve as a visual aid as he called for an end to mohair goat subsidies. Joined by Rep. Jason Chaffetz (R-Utah), Weiner explained that last year the federal government sent nearly $1 million in subsidies to mohair goat farmers; he said that such wasteful spending needs to stop.

Despite the injury, Weiner managed to get through his meeting and even pledged not to wear wool until the House removed the subsidy from the upcoming agricultural appropriations bill.