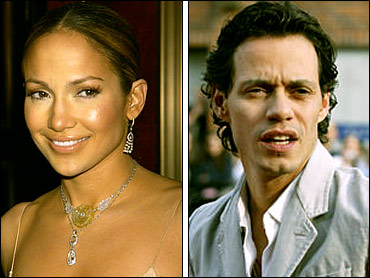 During an appearance on NBC's "Today" show, co-host Matt Lauer asked the Latin singer how he'd spent his weekend.

"I see where you're going with this, and I'm going to preface it with just saying — y'all know I don't talk about my personal life," Anthony said.

Lauer replied: "So, I — do I need to congratulate you?"

"Yeah, I have two albums coming out, man. Absolutely. And I would appreciate it," the 34-year-old singer said.

Anthony, who performed in Rockefeller Plaza, was wearing what appeared to be a wedding band on his left hand.

When Lauer continued to ask whether a wedding had taken place Saturday at Lopez's home in Beverly Hills, Calif., Anthony responded, "That would fall into the category of personal. And that's where I'm going to leave it."

On CBS'The Early Show, Bob Goen of "Entertainment Tonight" reports the wedding did indeed take place, and was a low-key affair.

Janice Min, Us magazine's editor-in-chief, says, "She had some stylists from another designer help her get into the dress, which leads us to believe it was bought off the rack."

Lopez reportedly held the surprise sunset nuptials Saturday, just past six o'clock, in the back yard of her own Beverly Hills home. A blanket of petals carpeted the path, which led to the lavish flower-covered archway where she and Marc wed.

Lopez and an Armani-clad Anthony held hands as they exchanged their vows, which were witnessed by about 50 family and friends. Next week's issue of Us magazine, on stands Friday, reports the union caught the guests off-guard as well.

Min says, "They were told (beforehand) it was a party for the MTV Movie Awards, but she told them it was a wedding and there were cheers."

In a picture, the bride is shown lifting up her wedding ring. Lopez also is pictured with her little flower girl, who got an up-close look at Lopez's multiple diamond-and-platinum Neil Lane necklace.

The 33-year-old bride was all smiles as she embraced her mom. Guadalupe also gave her new son-in-law a warm embrace. But it will be a short honeymoon. Lopez is already back at work on her film "Monster In Law" with Jane Fonda, and Anthony is doing promotion for his new album.

Part of Marc Anthony's promotional tour for his album "To Love Without Lies" (or "Amar Sin Mentiras" in Spanish) will be on The Early Show for the Summer Concert series.

"I've always been just so private and I've kept what's mine, mine," Anthony said.

Anthony said no matter what may be written about him and Lopez, he plans to "let it go. I have nothing to say about anything. My life is my life, that's the only thing I have."

Rob Shuter, Lopez's publicist for about a year, said Tuesday that he stopped representing her Monday evening. He referred calls to Lopez's manager, Simon Fields.

Asked whether Lopez married over the weekend, Fields told The Associated Press on Tuesday, "No comment. ... We don't comment on her personal life."

This would be the third marriage for the 33-year-old Lopez — the first was to waiter Ojani Noa in 1997, the second to Cris Judd in 2001. Noa lasted a little more than a year; Judd for nine months.

The singer-actress also was engaged to Ben Affleck, her "Gigli" co-star, but they canceled their plans in September 2003 amid a huge media frenzy and broke up in January.

Anthony divorced former Miss Universe Dayanara Torres last week in the Dominican Republic. They married in 2000 and have two young sons; Anthony also has a daughter from a previous relationship.

His new album, "Amar Sin Mentiras," means "To Love Without Lies" in Spanish.