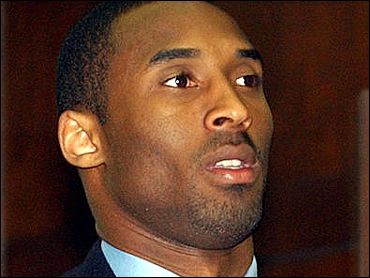 Swabs taken from Kobe Bryant during a hospital exam found DNA from the NBA star and the woman accusing him of rape, but none from an unidentified third person whose DNA was found on other evidence in the case, the judge said in a sealed filing mistakenly posted Wednesday on a state court Web site.

The defense wants to present evidence from the exam to jurors, perhaps to bolster its claim that the accuser had sex with other men during the week of her encounter with Bryant. In his filing, District Judge Terry Ruckriegle said the prosecution does not intend to introduce the same details and he ordered both sides to come up with an agreement by Friday.

Bryant's attorneys have said they believe the 20-year-old woman had multiple sex partners in the three days before last summer's exam, including one after her encounter with Bryant and before she contacted authorities. Her attorney has denied that claim.

The court order, which included the accuser's last name, appeared on a Web site where public filings have been posted for months as a convenience to court staff and the media. The Web site was shut down for about three hours to remove the document.

The accidental posting was the latest in a string of mistakes Clune has said prompted her to consider dropping out of the case. In September, her name was included in another filing on the Web site that was quickly removed. Last fall, the Glenwood Springs hospital where she and Bryant were examined accidentally turned over her medical records to attorneys in the case.

Last month, a court reporter accidentally e-mailed to The Associated Press and six other media groups transcripts of a closed-door hearing that dealt with aspects of the accuser's sex life and money she received from a state victims' compensation fund. Those transcripts are the subject of a First Amendment court fight that has gone to the U.S. Supreme Court.

Clune has asked Ruckriegle to halt use of the Internet and e-mail to distribute information about the case. The judge has not ruled on the request.

Most major news organizations, including the AP, have not published the accuser's name in keeping with a long-standing practice of not identifying alleged sex crime victims.

Bryant, 25, has pleaded not guilty to felony sexual assault, saying he had consensual sex with the woman at the Vail-area resort where she worked last summer. If convicted, the Los Angeles Lakers star faces four years to life in prison or 20 years to life on probation, and a fine up to $750,000.

Ruckriegle has threatened a contempt of court citation for any news organization that publishes details from the transcripts. None has done so, but media attorneys have challenged his order as an unconstitutional restraint of a free press.

The Colorado Supreme Court upheld the order, saying the state's vital interest in protecting the woman's privacy and Bryant's right to a fair trial outweighs the media's First Amendment rights. On Monday, U.S. Supreme Court Justice Stephen Breyer refused to overturn Ruckriegle's order but suggested he release an edited version, if not the entire transcript.

Ruckriegle is expected to talk with attorneys in the case during a hearing Friday about what information should be redacted before the documents are released.

Meanwhile, noted libel attorney Lin Wood left Colorado on Wednesday after meeting with Clune to discuss the case. Wood, who has defended the parents of JonBenet Ramsey and the man mistakenly accused of involvement in an Atlanta bombing during the 1996 Summer Olympics, declined to provide details of the meetings.

"We have been discussing all aspects of our client's case," he said. "I'm not in a position to discuss any details."